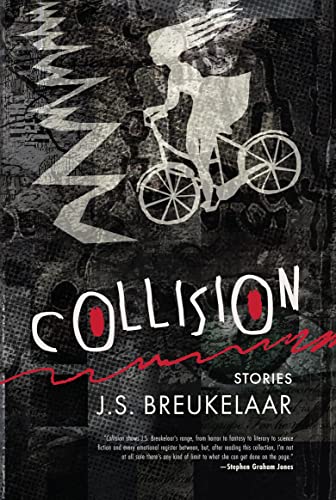 “J. S. Breukelaar is a writer of obvious talent, demonstrated over and over in this collection.”

The 12 stories in this collection feature horror, fantasy, and weirdness. The stories and the author are promoted as such. But the reader will probably find the more realistic stories to be her best, and many are quite fine— “Union Falls,” “Fairy Tale,” “Fixed,” and War Wounds.”

“Union Falls” starts “When the girl turned up for the job in her black jeans and cute haircut and no arms, Deel just shook her head, no.” Six paragraphs later, Deel said, “You do realize that the gig’s for a piano player?” “So do I get an audition or what?” the girl said. The girl, Ame, played with her feet, got the gig, and put the band on the map. When the girl left, Deel sat up on the bed to wave. “And Ame had waved back.” This is a tight story about the impact two damaged women have on each other.

“Fairy Tale” is about a wheelchair bound veteran who is visited at his home in a small town by the 14-year-old girl who shot him in the back in Kabul and put him in the wheelchair. Little by little, they become closer and closer—a cot in the garage for her, then she is moved into the spare bedroom. He becomes her father, she becomes a soccer star.

At 18, after a workout: “She finally appeared stripped down to a crop top, her shoulder muscles bunched and shiny with sweat. I watched her walk flat-footed over to the fridge and open the door and stand there looking into it with her long dusky arms starfished against the light.” Such a fulsome description, the image appears before the reader’s eyes.

After each story the author writes a paragraph to a page about the inspiration for that tale, or what she was trying to accomplish with the writing. Almost like directions to the reader about how they are supposed to think about the story. Some may relish this contribution by the author. Others may like to walk away their own thoughts, formed by their own experiences, absent the author’s thoughts, the story itself being enough.

A number of the stories use horror or disaster, seemingly for their own sake, and not in service to the story into which they are dropped.

“Lion Man” leaps at the reader’s throat with the first two lines: “When Turner blinked in the glare of the afternoon, the hand was still there. It lay on the leaf-strewn pine bark, where Clint Eastwood had bitten it off at the wrist.” Only in the middle of the next page does the reader learn that Clint Eastwood is a talking dog. Piled on top of this is a grandfather that hung himself in the barn a while back and is still hanging there, decaying and oozing, of course. It might have been a story of what happens when your dog mauls a kid, but the kid and the dog’s behavior become irrelevant to the story line.

The collection ends with a long story “Like Ripples on a Blank Shore.” Again, it has a killer first sentence (the author is very good at luring the reader in with first lines). “The Host went down in an eruption of crimson and bone, bringing commuter traffic to a standstill.” The story is ostensibly about the relationships between Celia and Max, his brother, now sister Clare and the repercussions of Celia’s aborted wedding. But the author introduces an alien species called Hosts, who hang around looking gross and bothering people, but with little effect on the main story line or with a story arc of their own.

J. S. Breukelaar is a writer of obvious talent, demonstrated over and over in this collection. Her foray into fantasy and horror is not as finely honed as are the stories that contain more character and emotion.