The Collector of Lives: Giorgio Vasari and the Invention of Art 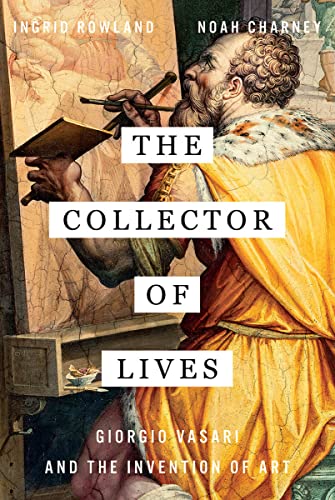 “The way we conceive of art traditionally, and how it is intrinsically linked to drawing, design, and painting, owes its popularization, if not its origin, to Vasari.”

The Collector of Lives is a fascinating account of the life of Giorgio Vasari, a painter, sculptor, architect, scholar, and writer who lived in 16th century Italy and took it upon himself to write about the artists he knew personally: Michelangelo, Titian, Donatello, and others. He endeavored to place their lives within the context of the artistic renaissance he found himself to be a part of and was fortunate enough to enjoy. His biographies of the artists he knew first-hand, and those who were crucial to the beginnings of the Renaissance, redefined art as we know it.

Vasari’s Lives of the Most Eminent Painters, Sculptors, and Architects was published in 1550 when he was 39 years of age, revised in 1568, and remains to this day a relevant and revealing piece of scholarship.

Rowland and Charney have done an admirable job in breathing new life into a 16th century biography that shows Vasari as a passionate and gifted artist, obsessed with his creative antecedents, as well as a vibrant character in the midst of an extraordinary period.

The authors insightfully state that, “Vasari’s life and his Lives are an ideal lens through which to examine the history of how humans have thought about art: from the Chauvet cave paintings and Plato’s parable of the cave to the twentieth and twenty-first centuries, when art has become a urinal turned on its side . . .” Such is the conceptual art of today.

But in fact, the way we conceive of art traditionally, and how it is intrinsically linked to drawing, design, and painting, owes its popularization, if not its origin, to Vasari. He invented the “study of art in an organized, logical, narrative way, based on iconographic analysis of artworks . . . closely linked to the personal biographies of the artists who made them.”

Vasari had been a young 13-year old apprentice in Michelangelo’s workshop as well as Andrea del Sarto’s and was thoroughly acquainted with the methods and crafts of his day. Rowland and Charney, hammer home an intriguing point, “Up to Vasari’s era, artists were still largely regarded as skilled manual workers . . . the objects they created were far more important than the reputation, identity, or genius of the creator,” and further, “the shift from craft to art had already begun centuries before Vasari’s birth. But when Francis I, the king of France [circa 1516], could write to Leonardo [Da Vinci], Raphael, Michelangelo, and other Italian artists he admired, and humbly request something, anything, by their hand, it marked a drastic change from old ways of thinking…he cared more about their authorship than about the works themselves.”

Although Vasari’s Lives was biased toward Florentines and was far from being all inclusive, as evidenced by Karel van Mander’s Painter Book of 1604, it affords a contemporary or near contemporary perspective of the period which is invaluable hundreds of years later.

What is remarkable about this book is that it buttresses and gives the reader a firm understanding of all the reasons why a man in his 30s would spend so many years visiting sites of masterpieces, writing letters, and interviewing family members to create an epic accounting in three volumes on the notable achievements of painters and sculptors, many of which he never knew. It becomes clear that the overwhelming facts in Vasari’s life and antecedents inexorably led him to the path of being a historical writer who was uniquely qualified to record the lives of artists from an sympathetic point of view.

The accounting of family lineage in the The Collector of Lives is detailed and becomes very confusing unless one’s specialty is remembering who was the son of whom, and why they changed their names. Centuries ago it was common, and important to a certain degree in terms of political influence, for offspring to be named after their grandfathers or great-grandfathers. And so in the case of Vasari—his full name was Giorgio di Antonio Vasari—his grandfather’s name was also Giorgio, and his father was Antonio. Within the Medici’s, which are intricately involved in the fate of Vasari, there are several Lorenzo’s, Giovani’s, and Giuliano’s with the same name. To facilitate a better understanding of the intricacies of family names and hierarchy the book includes a family tree of the Medici family which was so significant in the affairs of Florence, Rome, and by extension, a large degree of Europe.

The Collector of Lives contains 8 pages of full-color reproductions and boasts an extensive set of Notes, Bibliography, and Index, which are an excellent reference for researchers.

My only criticisms of the book are that it would certainly have benefitted the reader to have more illustrations, either color or black and white; and the annoying deckle-edge of the book, which while endowing it with a special rough cut appearance actually makes it difficult to browse or locate specific pages.

The Collector of Lives by Ingrid Rowland and Noah Charney is an engaging, intricate and  mesmerizing gem of a book for those who enjoy reading about the lives of artists and placing the Renaissance within a greater context.