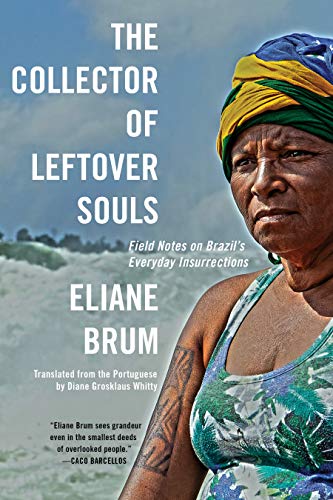 “a superb chronicle of marginalization, a collage depicting a continent-sized country still finding its way nearly 200 years after independence.”

The philosopher Theodor Adorno once stated that the condition of truth is to allow suffering to speak. Brazilian journalist and novelist Eliane Brum does just that in The Collector of Leftover Souls: Field Notes on Brazil’s Everyday Insurrections, a compassionate trek through Brazil’s peripheries, where the poor and the marginalized reside. As she mines urban favelas and Amazonian villages for stories, Brazil’s violent past and uncertain present come looming out of the shadows.

Each of the 17 essays in the collection involves the author visiting the locales of the poor, sometimes staying for days on end, where she witnesses their grief and their pleasures. Among those she profiles are entrepreneurial prostitutes in a mining town, an 85-year-old hoarder whose house has become a junk-packed cave, a street performer who eats glass, and residents of an old people’s home who arrive for a short sojourn but soon realize they will depart only in a box.

It’s clear that Brum reveres the act of listening. In the introduction she says, “more important than knowing how to ask a question is knowing how to listen to the answer.” Indeed, with an asbestos-stricken worker she finds herself listening not just to his answers, but to the “awful sound he made to keep himself alive.” She knows the noise of his breathing will be with him, and her, until the very end.

The woes of Brazil’s underclasses, then, are presented through the stories they tell. Along with the stories, Brum has a knack of eliciting the perfect quote, the line that captures a life. The factory worker who was poisoned for decades tells her, “I am made of asbestos.” An airport baggage handler who has never flown fantasizes about sitting in first class: “I’d sit there like a shark, and smoke a nice fine cigar.” A midwife who has birthed over 2000 children mourns every day the three she lost: “It’s a child missing from the community.”

While the collection is shot through with tragedy, at times it’s also comic. This is partly due to the characters Brum meets. Many of them are hustlers, illiterate stoics imbued with wisdom, wisecracking heroes of their own back yards. It’s also the prose, which has an antic, almost surrealist, energy. The essays are full of bric-a-brac, arcane rituals, and droll nicknames.

The book has one small blemish. In contrast to Diane Grosklaus Whitty’s terrifically fluid and idiomatic translation of the essays, the Introduction at times comes across as awkward and stilted. “My report . . . was decisive in stopping the Middle People from dying by bullet.” [Reviewer italics.] “I disembarked . . . to investigate the delicate things that made life possible, even in brutal hours.” “For 115 days, I accompanied the day-to-day of a woman with incurable cancer.”

These oddities are in no way representative of the rest of the book. Overall, this is a superb chronicle of marginalization, a collage depicting a continent-sized country still finding its way nearly 200 years after independence.