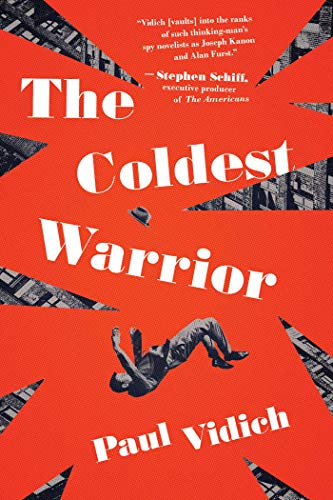 “The book spins quickly into risk and danger, and the final chapters, fast-paced and dark with threat, provide one of the best manhunt and intended escape sequences of current espionage fiction.”

Here's the premise of The Coldest Warrior: Readers know from the first chapter that Dr. Charles Wilson, a scientist in a high-security government program, became a major security risk in 1953 and was, ahem, enabled to take a plunge from a hotel window high enough above the Washington, DC, streets to kill him at once. But when CIA agent Jack Gabriel approaches retirement from the Office of Inspector General in 1975, 22 years later, he's tagged by his superiors to exhume the case and determine what role the Agency played in the death.

Vidich rarely gives much description of a scene or personal appearance but sketches the interior of a character—and all his significant ones are men—deftly and sharply. Jack Gabriel's been drawn to his work by the "cerebral challenge" and the complex problems coupled to high adventure and an urge to fight "the great Cold War against Communism." But his choices are also based in deeper rhythms of moral character:

“The call to worldly action had been planted in him by a mother who pushed him to excel in school, who did everything in her power to have him see opportunity beyond the small Midwestern town she hated. . . . When young Gabriel arrived in New Haven [for college], he carried a bundle of hundred-dollar bills she had pressed into his hand, a fondness for Shakespeare, an affinity for his mother's Socialism, and a deep skepticism of the rituals of the Catholic Church. The world, he'd been taught to believe, was a dangerous place.”

That's a very typical sample of Vidich's writing style, where disclosure comes more from the author's revelatory passages, and less from the situations playing out. In that sense, this author's style differs greatly from the classic work of John Le Carré, who reveals George Smiley's driving forces through his unexpected efforts on behalf of small people: a Russian emigré living in poor housing, a petty criminal who'd lost his beloved to a political betrayal, a retired police officer raising bees.

Vidich also walks a very different journey from Olen Steinhauer, whose protagonists bleed from long-ago inner wounds and must rise above their understandable frailty when confronted by political evil-doing.

And the first few chapters of The Coldest Warrior aren't the greatest quality—whether from overworking, or hasty rearrangement, or careless editing, it's impossible to know. Yet Vidich soon blooms with powerful moments and short snippets of insight that cut deep: Of one of the antiheroes in this thriller, Phillip Treacher, Vidich exposes Treacher's despair over his relationship with his wife by writing, "He was aware of the first lie he'd told her that Thanksgiving long ago. That deception had metastasized in his soul. He felt more alone than ever."

The halls of power in Washington, DC, shook in the 1970s from presidential disasters like John F. Kennedy's Bay of Pigs fiasco, Richard Nixon's Watergate lies and brutality, and the casual use of the CIA to topple international figures. All of this comes through in The Coldest Warrior, as the threats around Jack Gabriel mount and writhe.

The book spins quickly into risk and danger, and the final chapters, fast-paced and dark with threat, provide one of the best manhunt and intended escape sequences of current espionage fiction. One could quibble with the very last scene, a bit soft for a book of such terse "noirish" narrative—but the heart of the book is so good that it's an important one to grab, read, shelve, and think about. What other moments in our nation's political past may metastasize in its soul? How about in its present season?