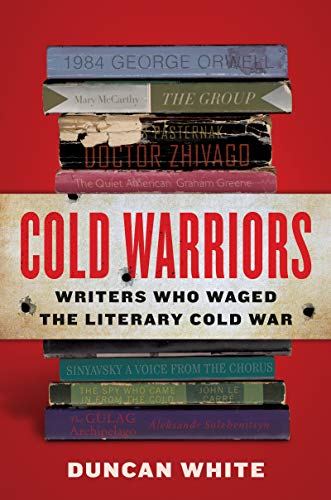 “[T]he best part of White’s book [is] the stories of writers such as Pasternak, Solzhenitsyn, Sinyavsky, Havel, and others who courageously wrote and spoke the truth to power behind the iron curtain.”

The Cold War was waged on many fronts: geopolitical, military, ideological, religious, and literary. Duncan White, a lecturer in history and literature at Harvard who reviews books for the Daily Telegraph, has authored a new book on what he calls the literary Cold War.

The book begins with Orwell, Koestler, and Spender idealistically fighting on, or rooting for, the Republican side in the Spanish Civil War of the 1930s, but soon becoming disillusioned by Soviet-communist control of the movement. This disillusionment led Orwell to write Homage to Catalonia, and Koestler to write Spanish Testament and later Darkness at Noon. These books were meant to educate their fellow leftists on the realities of communism in practice.

White notes that Orwell was among the first to review Darkness at Noon. He used the review, White explains, “to rage against the ‘eagerness of Western intellectuals’ who had justified [Stalin’s show] trials and that the ‘simultaneous cases in Spain’ had been ‘sedulously covered up or lied about in the Left-wing press.’”

Orwell called Koestler’s novel a “masterpiece,” which showed him, according to White, “that fiction, rather than journalism or memoir, however scrupulous, was the most effective way to communicate the essence of totalitarianism.”

Stalin’s purges and show trials in the 1930s, which included imprisoning or executing “anti-Soviet” writers like Isaac Babel, and the signing of the Nazi-Soviet Pact, divided the literary Left in the Western world. Some joined the non-communist Left and wrote for journals such as Partisan Review. Others maintained their loyalty to Stalin and communism and felt vindicated when the United States and Soviet Union became allies in the Second World War.

The Cold War actually began before the Second World War ended. Soviet spies and agents of influence infiltrated the governments of Western powers, including the U.S. and Britain, in the 1930s and 1940s. White details the damage caused by the Cambridge Five Soviet agents, and spends an inordinate amount of print humanizing the traitorous Kim Philby.

White credits George Orwell with anticipating the geopolitics of the early Cold War in his novel 1984. But it was James Burnham, not Orwell, who first envisioned a post-World War II world dominated by a clash of “super-states” in The Managerial Revolution (1941). White relegates to a footnote the fact that Orwell borrowed this idea from Burnham.

It was also James Burnham who in the spring of 1944 wrote a classified analysis for the wartime Office of Strategic Services (OSS) that warned about Soviet intentions to dominate the postwar world.  White notes Burnham’s ties to the OSS and the postwar CIA, as well as his role in founding the Congress for Cultural Freedom (CCF). But White describes Burnham as “fanatical in his anti-Communism and a relentless intriguer.”

Also unmentioned by White is Burnham’s bi-weekly column on the Cold War that appeared in National Review from 1955 to 1978. Indeed, National Review, which was the leading journal of the anti-Communist Right in the United States, doesn’t even make the book’s index.

White’s literary Cold War was waged, it seems, only by those intellectuals on the anti-communist Left who wrote for Partisan Review, Encounter, and similar journals. Norman Podhoretz’s Commentary, which played a crucial role in the literary Cold War, especially in the 1970s and 1980s, is also missing from the book’s index.

In this sense, White’s selection of writers is revealing. By including Howard Fast, Richard Wright, Mary McCarthy, Graham Greene, John Le Carre, and Gioconda Belli, White seeks to be even-handed in his treatment of writers who opposed communism and those who were often critical of the United States and the West. There are murmurs of moral equivalency here that are unwarranted. The sufferings of literary dissidents under communism bear no comparison to writers who dissented from U.S. or Western policies during the Cold War.

White is critical of the CIA’s secret funding of the Congress for Cultural Freedom and the journals funded by the CCF such as Encounter. He provides very little evidence, however, that the CIA determined the content of Encounter and other journals it funded. He provides no evidence that the writers for such journals wrote what they did because funding came from the CIA (indeed, most were unaware of that fact).

White is equally critical of U.S. and CIA involvement in Southeast Asia and their support for right-wing, authoritarian dictatorships who opposed communist influence in key regions of the world, though he is careful to point out instances where his literary warriors swooned over the likes of Castro, Daniel Ortega, the North Vietnamese communists, and other unsavory types.

The larger point, however, is that the CIA was an important, if not always effective, weapon in the West’s arsenal to wage and win the Cold War. And the West’s victory in the Cold War was a positive good for the world, especially for those people who lived under communist rule.

That brings us to the best part of White’s book—the stories of writers such as Pasternak, Solzhenitsyn, Sinyavsky, Havel, and others who courageously wrote and spoke the truth to power behind the iron curtain. The dissident movement within the Soviet empire clearly played an important role in ending communist rule.

It was Solzhenitsyn, more than any other single writer, who plunged the stake into the heart of the Soviet system with The Gulag Archipelago. This book showed unmistakably, writes White, that “the secret police, arbitrary imprisonment and execution, and systematic forced labor traced their origins to the immediate aftermath of the [Bolshevik] revolution, that mass incarceration and slave labor were baked into Soviet Communism.”

White concludes the book describing the mostly peaceful revolutions in Eastern and Central Europe and within the Soviet Union itself that ended the Cold War. Unsurprisingly, he gives too much credit to Gorbachev and not enough credit to Reagan, and no credit at all to Pope John Paul II who himself was a writer and intellectual of considerable merit. Indeed, it is arguable that John Paul II’s spoken and written words did more to bring down the iron curtain than any writer discussed by White.