Cold War in the Islamic World: Saudi Arabia, Iran and the Struggle for Supremacy 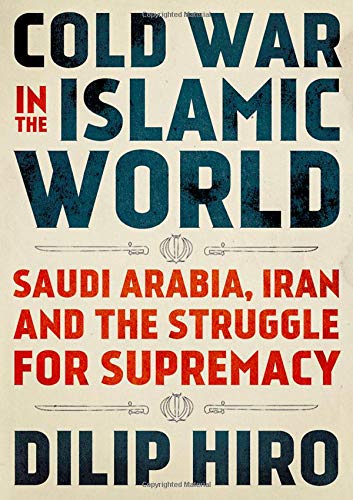 “One comes away from Dilip Hiro’s new book Cold War in the Islamic World with a heightened appreciation for the complexities of politics in the Islamic world. It is a world where geopolitics and religion intersect in a struggle for power and survival among Islamic regimes.”

The Middle East/Persian Gulf region defies simple descriptions, and the problems there are immune to simple solutions. One comes away from Dilip Hiro’s new book Cold War in the Islamic World with a heightened appreciation for the complexities of politics in the Islamic world. It is a world where geopolitics and religion intersect in a struggle for power and survival among Islamic regimes.

Hiro, who writes mostly for leftist and “progressive” publications such as The Nation, focuses on the rivalry between Saudi Arabia and Iran for political and religious predominance in the Islamic world and Persian Gulf region. It is a rivalry with roots in Islam’s centuries-old division between Sunnis and Shias, but which manifested itself politically after Iran’s Islamic revolution in 1979.

Prior to the fall of the Shah of Iran in February 1979, Iran and Saudi Arabia were important U.S. allies in the Gulf region. Oil, geopolitics, and fears of Soviet influence formed the cement of the alliances. Together, Saudi Arabia and Iran served as the “pillars” of the Nixon Doctrine in the Gulf region. When the Shah fell from power and the virulently anti-American mullahs seized power in Iran, the U.S.-Saudi alliance assumed even greater importance.

After the Arab-Israeli War of 1973, Egypt under President Anwar Sadat gradually became another key U.S. ally in the region. When Sadat was assassinated, his successor Hosni Mubarak kept Egypt close to the U.S.

In international relations, the enemy of my enemy is my friend. During much of the 1980s, Iraq was at war with Iran so the United States supported Saddam Hussein despite the fact that Hussein was the aggressor and used chemical weapons against Iranian soldiers.

Until the fall of the Soviet Union, American policies in the Gulf region were part of the larger strategy of containment of Soviet power. When the Soviets invaded Afghanistan in 1979, the United States provided military assistance to the Afghan rebels, among which were many Islamic fundamentalists.

When Iraq invaded Kuwait in the summer of 1990 and threatened Saudi Arabia, the U.S. and its allies (including Arab allies) fought a short and successful war to force Iraqi forces to leave Kuwait. The war resulted in the revelation that Saddam Hussein was seeking to acquire weapons of mass destruction. Throughout the 1990s, Iraq repeatedly violated UN resolutions designed to monitor Iraq’s efforts to acquire such weapons.

In the midst of all of these events, Saudi Arabia and Iran began what Hiro calls a “race to influence the Muslim world.” This race involved both religion and geopolitics. It also involved domestic challenges to both regimes that were suppressed with varying degrees of force and brutality.

Hiro recounts the events of the early 2000s, when Saudi-Wahhabi inspired terrorists attacked the United States on September 11, 2001, and the subsequent U.S. military response in Afghanistan and the war in Iraq that toppled Saddam from power.

Hiro is quite critical of the U.S. “war on terror” and the second Gulf War launched by President George W. Bush and continued by President Obama. Indeed, the author is critical of all U.S. policies in the region. He faults the U.S. most for its steadfast alliance with the Saudi royal family and its antagonistic policies toward Iran.

The book’s major villain, however, is the Saudi regime, which Hiro rightly describes as a repressive theocracy. He has a much more sanguine view of the Iranian government, ridiculing the notion promoted by the U.S. that it is the world’s major sponsor of terrorism. Hiro also has a more favorable view of the Muslim Brotherhood and Hizbollah than either deserves.

The unintended consequences of the second Gulf War included increased Iranian influence in the region and a return of Russian influence there, neither of which bothers Hiro very much. It is the continued and strengthened U.S.-Saudi alliance that he believes harms the region more.

Hiro concludes the book by blaming President Trump for “fueling” the Cold War between the Saudis and Iran, and for the President’s unstinting support of Israel. It is clear from this book and his other writings that Hiro believes the peoples of the Gulf region and Middle East would fare much better if American influence there was removed or at least reduced.

The Sunni-Shia divide will continue to affect the Muslim world. There is no end in sight to the “cold war” between the Saudi royal family and the Iranian mullahs described by Hiro. Schemes to democratize the Muslim states in the Gulf region are most likely doomed to failure. The United States will continue its involvement in the region as long as oil remains an economic and strategic commodity. The more things change in the Gulf/Middle East region, the more they remain the same.