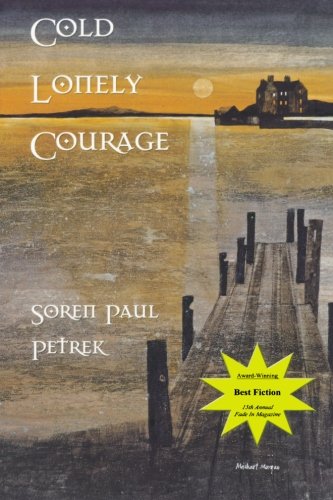 Believability is key in historical fiction, especially when your main character is a female assassin. The blending of real-life conditions within the framework of an imaginary narrative is a fine line to walk for a writer. Soren Paul Petrek begins Cold Lonely Courage with a quote from a flesh and blood figure:

“Women, as you must know, have a far greater capacity for cool and lonely courage than men.”

His heroine emerges out of this echo from the 1940s. Her name is Madeleine Toche, and she is known throughout France as the Angel of Death. All she wants is “a husband who loves me, some children and a little restaurant to call home.” Instead, she is brutally raped by a German officer on her way back from the market.

Coupled with the occupation of her native land, this act of violence leaves an indelible mark on her psyche. Fueled by hate, she exacts her revenge. She becomes a killer.

Escaping to London, Madeleine seeks to aid the French Resistance. After answering a newspaper ad, she is selected by the British Intelligence (SEO). They train her to withstand all forms of torture from water-boarding to unexpected beatings. Her devotion catches the eye of head trainer, Jack Teach. He requests permission—from none other than Winston Churchill—to have her trained as an assassin. Her mission is to take down the leaders of the Nazi party and the most sadistic officers of the S.S. Like Angelina Jolie in Lara Croft: Tomb Raider, she is designed to cut down the enemy with stealth and precision. She is transformed into a lethal killing machine.

Madeleine is introduced to the art of assassination by former German soldier, Berthold Hartmann. Recognized as a national hero for his bravery in World War I, he is now rejected by his country for being a Jew. Much like the relationship between Catherine Zeta-Jones and Sean Connery in Entrapment, the two form a student-teacher bond. With his family taken away to a concentration camp, Berthold is alone in the world. He promises to look out for Madeleine. When she wants to walk away from the job, he makes an oath to kill anyone who tries to stop her.

Often, Madeleine is described conflicting terms. She is charmingly French, much like Audrey Tautou in Amelie. Yet her beauty cannot be denied even when she is undercover. Instead she uses her physicality to gain access to her intended targets. As a femme fatale, she is a mixture of innocence and seduction. Her method is to play on the passions of men, while remaining levelheaded and focused in the face of danger. It is a survival mentality. “Her life had been an endless path of death. She had to make it through.”

However, she lets down her guard to form a relationship with Jack. Petrek relates, “It was her love for Jack that proved to her that she could enjoy physical love to the extent that she had even after her rapist’s brutality.” Madeleine’s emotions mirror those of Lisbeth Salander in The Girl with the Dragon Tattoo. Her feelings for Jack are described in the passage: “The joy she felt filled her completely, pushing deep inside the last vestiges of her anger and her hate, its power absolute and cleansing. The same way the venom of her anger and malice had permeated her being after her rape, love burned it all away.” After a brief moment of intimacy, they make a promise to find each other after the war:

“But if we make it through the war, you had better come looking for me. I will not worry if you stray as long as you come running back.”

“No, I am French. And by the way, you’re no schoolboy, Jack Teach,” she said.

A pivotal episode in the book occurs in a small French village called Oradour sur Glane. An entire town of civilians is massacred by the S.S. for supposed ties to the Resistance. According to Petrek, “The reasons behind the actions of the Nazis and their destruction of Oradour are clouded. There is no definitive answer. I chose to incorporate the theory put forth by Robin Mackness in his nonfiction book, Massacre and Aftermath concerning a possible explanation.” Petrek’s heart-wrenching detail of the aftermath is riveting.

Soldiers covered the wounded men in straw and doused them with gasoline. Most of the dying men were trapped in the tangle of bodies were beyond resisting. He saw more than one child’s clog that had not been completely engulfed by the flames and explosions that had ravaged the church. He saw blood cooked by the intense heat into the porous stone floor of the building.

The witness to this tragic event is a German military police officer, Horst Stenger. It is to Petrek’s credit that he includes a German character who is not brainwashed by Nazi propaganda. Stenger says, “These Nazis are bad. Although we try not to speak about it, we have both always known that to be true.” After Oradour sur Glane, he has a further change of heart, “Humanity drove him to pursue a life of service and to hunt down those that preyed on innocence. His eyes teared as he realized the true magnitude of the barbarity that had occurred to the people of the small town. He raised his own camera and began to take pictures, having to stop periodically to wipe tears from his eyes so that he could do his work and record the shadows that remained of an unspeakable act that demanded justice.”

One part of the story doesn’t quite fit—the American from the 82nd Airborne, John Trunce. He parachutes into France on D-Day only to miss his landing site when his plane takes on enemy fire. He meets Madeleine on a German-patrolled road:

“They were two young people who could have just as easily stepped out of a dance hall for a quick smoke and a chat.

“She found herself liking the young soldier immediately. He had a calm, easy way about him. He hadn’t shown any fear and seemed to care less that she was a woman. She was sure there weren’t many like him. It was the mark of being at home within one’s own skin.

“He knew that he’d come across someone special. Without a second thought he knew he’d die to protect her.

“They shared an instant bond.”

At this point in the story, Madeleine hasn’t seen Jack in over three years. Feeling instantly attracted to John, she clings to the distant memory of Jack, which is hard to believe. Petrek doesn’t explore the possibility of a romance between John and Madeleine, instead he prefers to keep his heroine on course for a fairy tale ending.

Other minor drawbacks include the cover art by Michael Morgan, which seems to have little to do with the book’s subject matter. Also the brutality of the language can be a bit coarse at times: “She knew she would be raped until there was nothing left of her and then hung for public display.” Yet the chapters are short, and the book is fast-paced.

Overall, this female assassin belongs on the big screen.