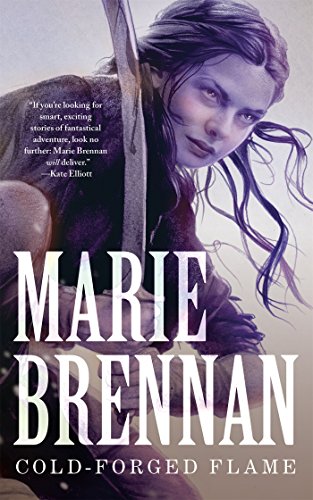 “Cold-Forged Flame is an exciting and engaging start to a new series.”

Marie Brennan brings the same thoughtful and fresh worldbuilding and character development to this small novella as she does to her longer books, and it's proof that epic fantasy doesn't need to be of epic size to work.

In almost exactly 100 pages, she introduces a character who doesn't know who—or what—she is but does know that she's bound to a quest and part of a wide and mysterious world. For most of the book, she's nameless; earning her name is one of the many trials she has to succeed at to get back with the prize and earn her freedom.

It's a good place to start a series, too: in such a small space as a novella a main character who doesn't know what's going on any more than we do can often build the world for us much more effectively than one who does. It's a natural constraint to the story, keeping it tight and contained so the book feels complete. The fact that she might misunderstand things once in a while just makes the story more interesting and adds depth and drama along the way.

The narration is an internal monologue full of snark and defensiveness, and that, too, helps the reader immerse in the world; since she doesn't trust anything, we can, and we can go along for the ride and enjoy it, while she has to figure it out and make sense of it.

The best part, though, seems to be the hallmark of these Tor short novels. Like the others, it doesn't feel rushed or incomplete; it's less a revival of the old pulp-length form and more a separate evolution of brevity. This is a complete story in a rich and detailed world; it just happens to be a short one, and a segment of a longer story that the series will tell, like self-contained episodes are to a show.

Cold-Forged Flame is a fast read, with a lot of chew on once the pages are done. Since it's set mostly on one mysterious island but obviously in a bigger world context hinted at by the people she meets along the way, a context of conflict and mythology, there's all sorts of places for the next installment to expand the story.

And Cold-Forged Flame is smart and self-aware, too,. Brennan knows the genre she works in, and she understands her characters; even in quick doses, she makes them real and honest, no matter how epically fantastical the world is around them. They're capable, savvy characters with an engaging swagger and a strong sense of self and purpose, even when they things go wrong. Cold-Forged Flame is an exciting and engaging start to a new series.