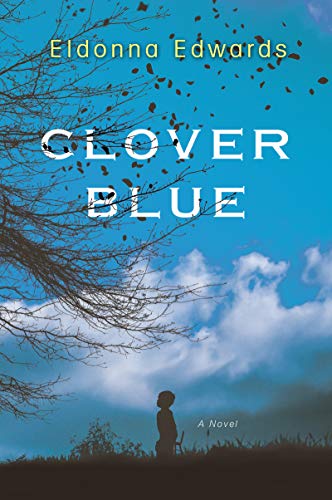 Clover Blue, Eldonna Edward’s second novel, is set during the mid-seventies, in what Edwards names the Saffron Freedom Community, which she places in outside Santa Rosa, California. She clearly did her research about the hippie communes of the era. (An author’s note at the beginning explains that it was only after she’d completed her study that she discovered there was, in fact, an active commune quite near her entirely fictional one.)

The hippie ideals—peace, respect, kindness, love, respect for all living things and reverence for nature—are portrayed as functionally governing the Saffron group of sister-mothers and brother-fathers, as they are called. They are led by Goji, who was seemingly inspired by his travels in India, but about whom we know little else. The members consist of a surfer, a military deserter, a Goji groupie, and an evidently capable midwife/healer, and their various young offspring.

New members are carefully vetted before admittance by group decision, as the right mindset is required as well as an understanding of the extensive responsibilities. All chores such as growing and harvesting food, goat milking, meal preparation, doing dishes, laundry, and cleaning their tree house are rotated and shared, and accomplished without electricity or plumbing. Children are parented cooperatively by all. Goji is the chief educator and home-schooler, and the education of Clover Blue, the protagonist, like that of his mischievous best buddy-sister Harmony, appears broad, deep, and admirable.

There are, of course, the better-known titillations of commune life. Free sex by the adults in the Sacred Space. Clothing optional and most often eschewed. But Edwards avoids making her story about these except the tangential and normal interest of Clover Blue and Harmony as they approach adolescence. And questions about exactly what the sisters and brothers are actually doing in the Sacred Space by no means dominate this coming of age story that is also a bit of a romance (Clover Blue and Harmony, over the years) and a mystery, too.

(Exactly how did Clover Blue come to be adopted at age three by the Olders? Why can’t or won’t someone tell him what his original name was before Goji named him Clover Blue? What his real birthday, as opposed to the day he was adopted? Why are all the Olders so darn evasive when he asks a question about any of this stuff?)

Edwards begins her story with Clover Blue unwillingly watching a traumatic live birth, giving him a compelling reason to think about his origin. The birth is a family occasion; everyone watches, supporting and encouraging the mother while the member-midwife delivers and saves the baby. But it’s not the wonderful experience for Clover Blue that it is for the others like Harmony, who handles it much more easily.

It also sparks a question as to whether one of the sister-mothers is his biological mother and he was adopted by the group when she joined. Goji tells him he’s too young to understand and that they’ll talk when he’s twelve. Since this will be over a year later, it provides Edwards with a great deal of story space in which to show the successful upside of commune life, and she does this patiently, carefully depicting loving relationships, which makes for some slow pacing in this section of the novel.

The reader is not entirely taken by surprise on Clover Blue’s twelfth birthday when he initiates the long-anticipated conversation.

He goes back to eating his cake.

“Remember that night Aura was born and you said we’d talk again when I’m twelve?”

“I don’t believe I said the exact day you turn twelve.”

Ugh, I was sure he meant my actual birthday when he said it. Before I can find the words to ask about setting a day to talk, he spots Rain with Sirona and waves them over. “I’m sorry, Clover Blue. As you’re well aware, sometimes the universe has its own plans.” Goji drapes one arm around each of the women and guides them down the path toward the meditation area. “Come on, Blue, let’s introduce your new sister to The Peaceful Way.”

When Goji fails to come through—and the onset of adolescence raises his critical thinking level along with that of his hormones—Clover Blue starts investigating his origins on his own. He has, for sure, Harmony’s help. A new member of the group, to whom Clover Blue feels a powerful attraction, layers on the intrigue, and the real thread of the novel begins to unspool much more quickly. The social issues of the seventies are not ignored: the family confronts racism, violence, and society’s disdain for those perceived as outside the mainstream.

This is a novel about the complexities of family: how do the bonds of lived love compare and compete with the invisible pull of blood? We don’t get a clear answer, of course, partly because there’s not one, based on the surprise ending, and partly because Edwards has also well reminded us of the dark side of the seemingly idyllic.