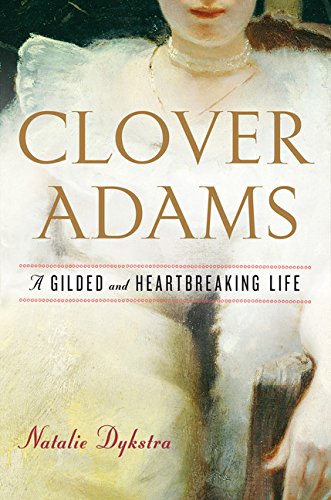 “Gilded Clover Adams’ life undoubtedly was. It was undeniably tinged with sadness, too—the death of her mother when Clover was only six; the suicide of a beloved aunt; her own childlessness. Clover nonetheless rose above these personal tragedies to live a life filled with creativity, art, travel, and intelligent debate. Until a series of dark moods overwhelmed her completely, her life had been full and rich. The heartbreak was not in her life. It was in her desperate demise.”

Whenever—if ever—Marion “Clover” Adams’ role in 19th century American history is mentioned, it is usually as the adjunct to a brilliant man of letters or as a tragic suicide. At the start of the 21st century, does this narrow view of the wife of the grandson and great-grandson of presidents, Henry Adams, matter?

To first time biographer Natalie Dykstra it does indeed. And thanks to her evident passion for her subject, tempered with enough restraint to intrigue rather than bludgeon the reader into the author’s way of thinking, Clover Adams at last comes vividly into her own.

Through meticulous research and a lively writing style, Ms. Dykstra succeeds in presenting a fully rounded picture of her subject, bringing Clover to vibrant life. Ms. Dykstra’s foray into biography plays out like the mystery it ultimately is: Why, at age 42, did Marion “Clover” Adams take her own life, a life full of privilege and position—not only as a member of the wealthy Boston Hooper family, but also as the wife of respected historian Henry Adams?

It was Clover’s photographs—the socialite took up the relatively new art of photography less than three years before she killed herself—that first led Ms. Dykstra to try to find the truth behind what drove her to her death. And although there was a boatload of Clover’s own letters, as well as the discovery of family papers still in private hands that allowed the author to understand more about the world into which Clover had been born, “What I saw in her photographs was exactly what she’d seen herself,” writes Ms. Dykstra, “giving me a kind of visual evidence that letters don’t provide, opening up hidden reservoirs of feeling about family and marriage, loss and madness.”

Clover’s life, says Ms. Dykstra, was previously “half-illumined,” reflected in the views of others: “Occasionally, Clover can be glimpsed in other people’s diaries and letters—a quick flash of her skirt as it rounds a corner.”

But she left behind clues, not only in her many letters but also—most eloquently—in her revelatory photographs, “which invite the viewer to stand not on this side of her suicide, but on the other, the one she lived on.”

On the surface, Clover led a completely charmed life. Born into a lively, intelligent and privileged family, she had “all she wanted, all this world could give.”

She enjoyed a close bond with her older brother, Ned, and her widowed father but, as she drifted toward her 30s, life as an unmarried woman had, in her own words, “become tiresome.” Marriage prospects had dimmed after the Civil War, severely skewing the male:female ratio, and Clover was 28 by the time she married. Her groom, Henry Adams, was 33.

According to Ms. Dykstra’s research, Clover and Henry truly loved one another, although, from the start, a strange ambivalence seemed to underscore Henry’s feelings. He found Clover, he wrote to his brother Brooks during his engagement, “so far away superior to any woman I have ever met, that I did not think it worthwhile to resist . . . I am absurdly in love.”

But to his friend, English lawyer Charles Milnes Gaskell, Henry wrote: “She is certainly not handsome; nor would she be quite called plain, I think . . . She talks garrulously but on the whole pretty sensibly . . . We shall improve her . . .”

Notes Ms. Dykstra: “The way his genuine love for her was marbled with a persistent turning away, a covert withdrawal hidden within overt approval, would persist throughout their marriage.”

Fiercely intelligent, Clover thrived in the “gilded age” of Washington, DC. A wide array of writers and artists, contemporary presidents and other politicians, dignitaries, doctors, and academics made their way to the Adams’ salon—as much for Clover’s company as for Henry’s—drawn by her wit and warmth (as well as her often entertainingly acerbic take on society). She was, said famed author and close confidant Henry James, “a perfect Voltaire in petticoats.”

Honest, quick thinking, and with a streak of independence and rebellion, Clover read widely, tackling Plato and the Greek playwrights in their original language.

Though dismissive of her own writing skills, Clover was nonetheless a talented wordsmith in her own right, describing a Titian painting as looking as though it had been painted “with powdered jewels soaked in sunshine,” and a row of golden poplars as “enormous lighted candles.”

She was practical, too, ordering the legs of their furniture to be shortened to better fit her 5’ 2” and Henry’s only slightly taller proportions.

In 1883, Clover began taking and developing photographs with her portable five-by-eight-inch mahogany camera. It was a complicated procedure, but “Clover started making art, and the process was changing her life.”

In less than three years she had a collection of 113 photographs, their subjects uniquely and artistically interpreted. But just when she had discovered this powerful way to express herself, her life started to unravel. “What had been a recurrent undertow of dark moods gathered force until she was engulfed by despair.”

In December 1885, two and a half years after she had first picked up her camera, Clover committed suicide by drinking from a vial of potassium cyanide that she had used to develop her photographs. “The means of her art had become the means of her death.”

Henry was heartbroken, commissioning sculptor Augustus Saint-Gaudens to create a brooding bronze statue to memorialize her. The six-foot-high “compelling and mysterious figure, draped and seated” was his only public tribute to her.

“He almost never spoke of her and did not even mention her in his Pulitzer Prize-winning autobiography, The Education of Henry Adams.”

If there is any small criticism to be levelled at this haunting book, it is in the subtitle: A Gilded and Heartbreaking Life. Gilded Clover Adams’ life undoubtedly was. It was undeniably tinged with sadness, too—the death of her mother when Clover was only six; the suicide of a beloved aunt; her own childlessness.

Clover nonetheless rose above these personal tragedies to live a life filled with creativity, art, travel, and intelligent debate. Until a series of dark moods overwhelmed her completely, her life had been full and rich.

The heartbreak was not in her life. It was in her desperate demise.