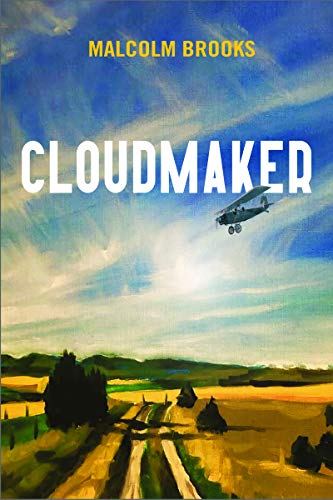 “a coming-of-age novel rich in Americana.”

This book is like a road trip vacation. There’s an ultimate destination, but instead of zooming along the highway and getting there in a day, the story takes the scenic route in a leisurely voyage of discovery along backroads and byways.

Thus, if you’re in a hurry to get from point A to point B, this is the wrong novel for you. It starts out briskly enough, with the lead character test-flying a homebuilt glider in the middle of the night. But after that crash landing, things slow down and start drifting away from the aviation story promised by the cover and jacket.

That’s probably because it’s a literary style of novel: long and lush, conveyed in masterful prose that captures time, place, and conflicting cultures. Character motivation and backstory are deeply explored. It concentrates on the layers and complexities of people and life, with all their surprises and pain, inching toward goals by way of sidetracks and backslides, with the characters learning hard but profound lessons in the process.

The plot seems to be a young man’s dream to build and fly an airplane. Time and setting are 1937, in the dry part of rural Montana, as the national Depression is ramping up. At the same time, Amelia Earhart is making her historic attempt to fly around the world from which she never returns.

Character viewpoint pogo-sticks around between Houston “Huck” Finn, his cousin Annelise, his parents, and their friends. All except the mother conspire to build an airplane together in secret, to avoid the emotional fallout from the mother and possible legal consequences from the local sheriff.

The story embodies the old saying, “Life is what happens when you’re busy making plans.” The airplane plan is interrupted over and over again by reality, which the story drags the characters through in exhaustive detail. Most of the book is about everything but the airplane, even though it is the title character. Its build status pops into the narrative now and then to anchor the passage of time, but progress toward the goal of flying it advances at snail pace.

Progress is also interrupted by an adventurous subplot. Gangsters are loose in the area, and Huck and his cronies find the body of one in a river while they’re fishing. Huck, at his friends’ encouragement, appropriates the corpse’s rare and valuable Lindbergh Hour Angle watch (Lindbergh as in Charles, the famous aviator who was first to fly across the Atlantic solo ten years before the story). Huck is then rocked back on his heels in astonishment when Annelise shows up wearing one of those watches, too.

Annelise is an avid student pilot who had an affair with her flight instructor that got her shipped by her parents to her remote aunt’s ranch in punishment for her wantonness. The watch actually belongs to her lover and is her most precious possession. It gets confused with the other watch, however, which is sought by the gangsters as a clue in their search for the hidden riches resulting from a heist.

While this subplot and the airplane main plot fight for page space, the novel extends back through different arms of family history to explain how Huck’s parents and one of the other characters came to be. Those histories support the central story eventually, allowing the disparate threads to interweave into an ending that ties them all together. Takes more than 400 pages to get there.

Which brings us back to the travel-vacation analogy. If you’re a reader who likes the slow and scenic route, you’ll be delighted to learn about buffalo hunting, vintage firearms, metalsmithing and general design and fabrication (along with how this applies specifically to building aircraft), evangelical religions and how they form people’s lives (and twist their minds), the Dust Bowl, farming and ranching, schooling, adolescent romance and sex, the mores and politics of Middle America in the 1930s, poverty, idealism, friendship, villainy, aviation history, the joys and risks of flying itself—all topped off by a treasure hunt.

At the same time, you’ll get intimately acquainted with a cast of characters operating within this milieu, and perhaps will never forget them.

Conversely, if you’re an A-to-B type, you’ll feel like the kid in the backseat whining, “When are we gonna get there? How many more miles?”

By the time you arrive, you’ve gone through a coming-of-age novel rich in Americana. Whether you’re enthralled or exhausted by the journey will, of course, depend on your taste in fiction.