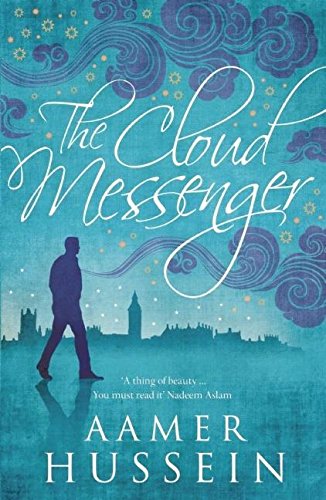 “Exquisite . . . Aamer Hussein’s messages in The Cloud Messenger will be read over and over again by readers for many years to come.”

There is a Chinese proverb that says: “A book is like a garden carried in the pocket.” Never has that been more poignantly illustrated than by Aamer Hussein’s exquisite novel, The Cloud Messenger. Though not always fragrant, this garden is colourful and delicate, its words the young shoots and the falling leaves, the thorny rose and the promise of spring in the blossom.

The story tells of Mehran’s difficult steps into and through adult life, as he moves from Karachi to London. It is a tale of love and belonging and as we accompany Mehran on his journey through relationships, love affairs and travels in Italy, India and Pakistan, we are caught in the riveting net of Mr. Hussein’s words, their haunting beauty lingering long after the final page has been read.

Mehran grew up in Karachi, where he would often feel excluded as he listened to his wealthy, well traveled father share memories of London with his older sister. For a boy whose every need was attended to by servants, who ate papaya and custard apples, and knew only the sea and the desert, his mother’s story of walking “on a pond sheathed in thin ice” conjured up an exciting world he could scarcely imagine.

Mehran’s father “was always dreaming of other places” even when he was with his family, and the reader is aware from the very beginning of the book that whilst admiring and seeking to emulate his father, it was more than geographic miles that frequently separated father and son.

Mehran studies Persian at university in London, and becomes involved with four characters—friends, lovers, tutors—the threads of whose colorful lives are embroidered with his own throughout the book. These characters are not always easy to like, yet they are easy to empathize with, each one enriching the narrative, though not always Mehran’s life.

The opening lines of The Cloud Messenger summarize the theme of this book: the yearning to find one’s place in the world, and the needs that drive us to places we might rather not be:

“I heard two gulls cry at dawn today. Why do they come to town in summer, so far from their body of water? . . . It’s a sign of coming rain, you said. They fly inland when it rains. But only a few days later somebody told me they weren’t seabirds at all: just scavengers that visited cities in search of refuse from dustbins.”

Mr. Hussein’s descriptive powers lean generously toward the poetic and are immediately engaging. In a style more reminiscent of Nadeem Aslam or Amitav Ghosh than Khaled Hosseini, the story moves forward slowly through the characters, rather than being plot driven, so it is possible to fully enjoy the lyrical beauty of his words without losing the thread of the story.

As Mr Hussein quotes from the Meghaduta of Kalidasa: “What is a cloud, after all, but smoke, air and water? What are my messages, to be silenced by the vanity of sending them by cloud?”

Aamer Hussein’s messages in The Cloud Messenger will be read over and over again by readers for many years to come.