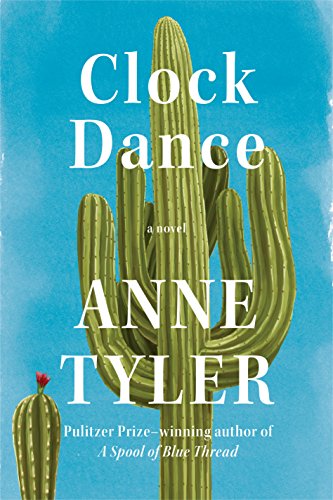 “Tense and dramatic . . . amusing and uplifting. This is a superb, timeless book.”

Eleven-year-old Willa Drake sells candy bars door to door in rural Pennsylvania with a friend. Just as we’re settling into her little girl world, getting to know her needy, younger sister, her doting but ineffectual father, and her remote and often cruel mother, Willa is suddenly 21, dealing with college and romance and moving to California. Two more decades pass in a flash, and Willa has become a mother herself. Then, for the bulk of the novel, set in Arizona and Baltimore, Willa is 61, yearning to be a grandmother.

Here’s the psychological challenge for the reader: You don’t want to jump decades like this. The jumps are jarring. Life doesn’t operate this way, you want to protest. But the protest is exactly the point in Anne Tyler’s 21st novel, Clock Dance, a brilliant and tender reflection on time, perception, and family.

Another more obvious reason why you might resist the leaps from one age to another: the characters are so sharply drawn, you selfishly want to spend more time with them, which is a testament to Tyler’s fine writing, especially as it pertains to point of view and language.

In Part 1, for instance, Willa’s observations perfectly match her eleven-year-old sensibilities. Willa’s “mother was the prettiest mother in their school, and the liveliest and the smartest, but then all of a sudden something would happen and she would have this big flare-up.”

Willa herself often finds it hard to believe that she’s reached her early sixties. When her now distant sister, Elaine, calls to get together, it’s not the dour Elaine that Willa wants to see; she misses the six-year-old Elaine. And so does the reader. Which poignantly demonstrates the effectiveness of the leaps in time.

It’s no surprise then that Willa admires slow growing saguaros. She views them as majestic and mythical, “the only things in Arizona she felt a deep attachment to.” She longs to understand her father’s advice on coping with loss: break the day into moments. She’s fascinated by the clock dance, where three young girls line up precisely behind one another and whirl their arms like hands of clock. We’re all part of the dance, which is both joyous and heartbreaking.

Because of her acute sense that time is fleeting, Willa is a careful “chronicler” of her own life. (The book is not written in the first-person, though it feels like Willa is narrating.) After a major loss, she reflects: “Now she settled into the dailiness of grief—not that first piercing stab but the steady, persistent ache of it, the absence that feels like a presence.” By now, this feels like earned wisdom. She learns how to adapt to the changes that whirl around her. Willa is not always correct in her conclusions. She’s kind, often to a fault, for example. But she learns to recognize that family is what you make it, reminiscent of novelist Kent Haruf’s best work.

This is a beautifully crafted book, every page suffused with small gems and surprises. Seemingly homespun and effortless, yet refined and worldly. Often quaint, but with danger lurking along the edges. Tense and dramatic, but also amusing and uplifting. This is a superb, timeless book.