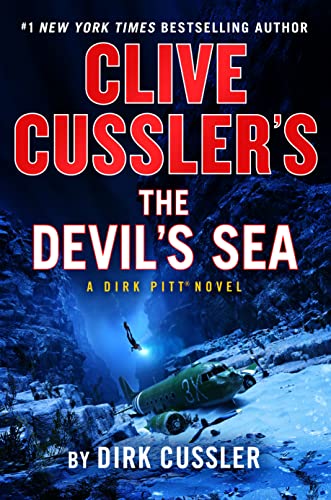 If there’s one thing we’ve repeatedly emphasized here in our reviews of new offerings in the mystery and thriller genres, it’s the fact that there’s always going to be a place in the world for books that seek to entertain us first and foremost.

While the bookstores fill up with nonfiction releases focusing on current political crises and wrongdoing, social injustice, and other hot-button subjects—all extremely important to our understanding of what’s happening in the world around us—readers occasionally want to get away from it all. Yes, escape. Into a book that makes no demands and no promises other than to hold our attention and, oh yeah, entertain us.

The Clive Cussler franchise has always occupied a prominent position on the leading edge of escapist adventure thrillers. With five different series featuring various characters that populate the Cussler universe, this juggernaut of fun fiction continues to roll out bestseller after bestseller.

A stable of authors have carried the late Cussler’s legacy forward, and their newest offering, Clive Cussler’s The Devil’s Sea, features his son Dirk Cussler weighing in with his first solo effort in the Dirk Pitt Adventures series after having cut his teeth as a co-author of eight previous novels.

This one finds Dirk Pitt and his faithful sidekick Al Giordino trawling the Luzon Strait for the wreckage of a Chinese hypersonic missile while commandos sent by the Chinese government have commandeered a mysterious scientific vessel to retrieve their property and preserve its classified secrets.

Meanwhile, Pitt’s children, Dirk Jr. and Summer, have discovered rare artifacts connected to the crash of a CIA plane fleeing Tibet in 1959 during the Communist takeover. While attempting to return these sacred works of art to their rightful owners, they find themselves pursued by more Chinese commandos intent on claiming the pieces for their government’s nefarious purposes.

Because these novels are written to a formula, and because there have been a whopping 25 previous titles in this series alone, the author feels no need to invest his time and energy in character development.

Dirk Senior and Giordino maintain a constant Dean Martin-and-Jerry Lewis repartée that’s stilted and a bit thin, but who cares? The miracle is that they have enough breath for even this much dialogue while fighting to save themselves (or someone else) from another impossible jam with only seconds left on the clock before a horrible death arrives to claim them.

Dirk Junior and Summer Pitt, meanwhile, have a much better relationship than any brother-sister combination you’ve probably come across in a while, but once again, who notices when they’re dodging bullets, careening over rocky ground in an ancient International Harvester pickup truck, or struggling out of zip ties while being plunged into an ice-cold glacial lake?

This book does have a few educational elements, though. The author gives us a glimpse of what it was like when Tibet was overrun in 1959, he touches on the importance of historical statuary to the Dalai Lama and his followers, and he teaches us some very neat tricks with duct tape we might not have thought of before.

He even manages to work in an underwater adventure way up in the Himalayas, which is no mean feat, when you think about it.

And before we forget, a word of praise to book designer Nancy Resnick and illustrator Roland Dalquist for a volume that echoes the look and feel of vintage adventure thrillers from the previous century, adding to our enjoyment of the book.

To summarize, dear reader, bear in mind that if you’re looking for a novel with pith and substance, characters with depth, and themes that resonate with universal significance, you’ll need to stroll quietly away from this particular rack and see what might be found in another aisle.

But if you’re looking for Pitt and Summer, tsunamis and airplane crashes, Communist commandos and misguided scientists with their wacky inventions and beautiful daughters, well, you’ve come to the right place.