Climate Chaos: Lessons on Survival from Our Ancestors 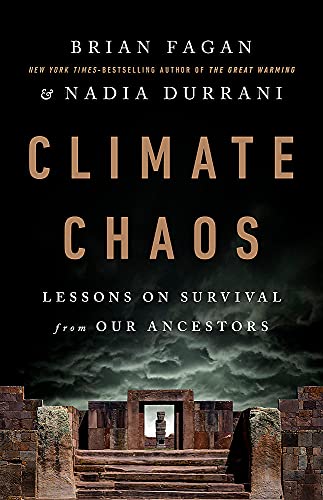 “‘all human cultures share one common trait: they adapt constantly in response to all manner of variables. .  .  . and long-term success .  .  . will be charismatic, authoritative leadership that transcends national interests and attacks climate change from a truly global perspective.’”

What can 30,000 years of environmental climate history teach us about adapting to today’s climate crises? The leading archaeologist writing team of Brian Fagan and Nadia Durrani has compiled a fascinating study of human species’ adaptation through cycles of drought and flooding in pre-industrial and post-industrial times.

During pre-industrial times, humans were in constant pursuit of resources as they evolved from hunting-gathering to subsistence agriculture, always in pursuit of reliable water or escape from flooding. With the impact of efficient agriculture, the population grew, and mobility was a survival strategy. It was always a battle for water resources throughout history, as the many world wars have attested. Those who controlled water, controlled life.

Now, on the brink of an ecological tipping point, the carrying capacity of our planet earth has been strained and a truly global and immediate solution is critical, argue the authors. These concepts are abundantly clear to this reviewer with a biology, ecology, and environmental engineering background, but the average reader of this academic work may require more study.

To illuminate these concepts, the authors aptly show us that local solutions were key and simple societies, who could easily move to better locations, who relied on kinship and reliable leadership, and who passed down their environmental knowledge were able to adapt. Some such societies still exist in remote places on earth, serving as a barometer of climate balance, but one that is easily disrupted by the current industrial world and its growing population.

The authors begin by examining the fall of the Roman Empire with the stripping of Mediterranean forests for wood, where crop diversification strategies and the famous aqueducts eventually failed and where “Rome and other major cities were petri dishes of infection.” Climatic events and plagues were tipping points but there were also the resulting economic and social upheavals, as well as military events.

“.  .  . it’s easy to find startling parallels with today’s globally focused world. . . . One just has to look at the globalization of today’s food chains . . . as we have the potential ability to adjust our food chains in the face of major climate changes. But there’s always the possibility that future warming will be too rapid . . . And almost no one thinks about this in political terms.”

Similarly, the authors take us through the Maya transformation where the civilization was impacted by deforestation, population growth, and unstable rainfall leading to long periods of drought. Yet, “the lesson of the Maya experience is crystal clear: strong, decisive leadership matters.”

In South America, the warming winds of El Niños and the cooling winds of La Niña brought drought and flooding in a fluctuating cycle of hot and cold. Still relevant today, “farmers adopt the long-lost raised-field farming system that once supported an entire civilization. . .  . but much of this knowledge is vanishing . . .”

By the time the authors bring us to climate history in North America, the observant reader will notice a pattern developing—local adaptations firmly based on traditional experience and knowledge with “conservative strategies that minimize risk, combined with flexibility and opportunism, ensured survival in diverse and semiarid landscapes.” The group mattered more than the individual and women had powerful voices in water management. Again, mobility was key as people tended to congregate close to the most productive land, but in today’s urban world, this is no longer a viable option.

“Centralized authority depended on long-term stability and reliable food surpluses . . . as Native Americans depended on complex political and social realities.” This is an important lesson to be learned today on a global scale.

Examples of pre-industrial fluctuating climate patterns with resulting boom or bust, famine in particular, continued in the Far East, Africa, and Europe. These were not yet human induced events as with the Industrial Revolution, but plagues, famine, violence, and political unrest continued to challenge humans. Yet the population continued to expand.

By 536 CE, a combination of volcanic events and a plague plunged Europe into economic stagnation for over a hundred years. It’s a wonder that the human species survived at all. Subsistence agriculture continued to nourish Europeans though unrelentingly harsh winters, and hunger and malnutrition were a given, along with high infant mortality. In the 1000s, life expectancy for peasants was in the twenties.

The argument by current climate change deniers that climate change today is like that of the past natural warming and not a sign of instability or crisis is nonsense. “Not only have we humans caused the current warming, but our growing body of evidence does not support the vision of bygone lovely long summer days of nonstop plenty.”

During the 14th century, “the Great Famine brough European farmers to their knees,” all a result of periods of either great warmth, torrential rains, cold, and resulting endemic warfare over control of resources. The authors remind us that “. . . sustainability and resilience depend on forward thinking, detailed knowledge of the environment, and long-term planning . . .”

In keeping with the solution of mobility to escape growing climatic disasters, colonization of the Americas almost fell apart in the 16th and 17th centuries due to shifting climate conditions, including severe droughts, for which European settlers were not prepared. That humans survived at all can be attributed to certain “resource hotspots.”

Looking ahead, the authors direct our attention to new research of tree ring reconstructions, soil moisture with hydrological modeling and statistical evaluations. The years 2000 through 2018 were the second driest since year 800 in the Americas whereby “47 percent of the severity of the current megadrought is the result of anthropogenic (human induced) climatic warming.” And it is still in progress!

The bubonic plague (Black Death) arrived in the mid 14th century caused by climate change and wiped out some 25 million people. “.  .  . recurrent plagues and irregular famines kept population in check for decades.” Eventually, things settled down, somewhat, with developments in sustainable grain crops and infrastructure, sea trade, and a diversified agricultural economy. Then came volcanic eruptions and the Little Ice Age to again challenge humans in the 17th and 18th centuries, but agricultural diversification and selective animal breeding arrived for the rescue, as well as and unfortunately, the slave trade to provide cheap labor.

Then, arrived the potato famine, a global cholera pandemic in the 19th century and more volcanic disruptions to stress the population. Enter the pervasive use of coal during the Industrial Revolution and any effects of “natural” sources of climate change fade in comparison. “. . . the greenhouse forcing of industrial-era warming began by the mid-century and continues to this day.”

Unlike our ancestors who met climate change with local adaptations and living in harmony with the environment, using mobility to find better resources, today’s humans must adapt in different ways where mobility is no longer an option.

“That human activities are leading to inexorable global warming is now scientific certainty.” But, the authors ask, “does the past matter in the context of current climate change?” And, “What possible relevance does the experience of our dead forebearers have for the climatic changes we are facing today . . . ?” To answer this, they repeat that the problem is global and must be met with solutions on a global scale, that “. . . all human cultures share one common trait: they adapt constantly in response to all manner of variables. .  .  . and long-term success .  .  . will be charismatic, authoritative leadership that transcends national interests and attacks climate change from a truly global perspective.”

Donna Solecka Urbikas is an award-winning author of My Sister's Mother: A Memoir of War, Exile, and Stalin's Siberia (U of Wisconsin Press, 2016, 2019) following a career in teaching and environmental engineering.