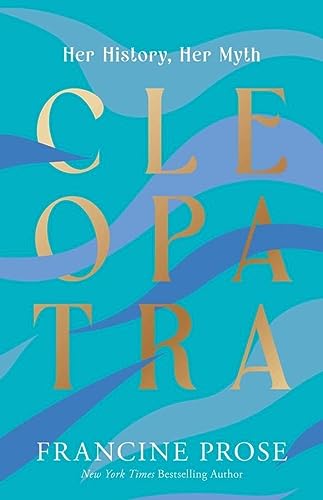 Francine Prose joins the legions who have written about the fabled Queen Cleopatra. But more than her life and history, Prose examines how that life has been interpreted and presented from ancient times to the present. The book functions more as a feminist critique of the legend than a historical view of the life.

From the introduction on, Prose makes clear her agenda, that no other woman Egyptian ruler can compare with Cleopatra:

“Her life can be seen as a feminist story, if only because it includes so much that women were not supposed to do. Even today it would be unusual for anyone, especially a woman, to function as a military planner, military strategist, diplomat, linguist—and ruler of an enormous country with a diverse and restive population. There had been other Egyptian queens. During the fifteenth century BCE, Hatshepsut remained in power for twenty years. Like Cleopatra, she supervised heroic construction projects and enlarged Egypt’s borders. . . . But none of Cleopatra’s female predecessors have acquired a legendary status anywhere near her own.”

While Hatshepsut is indeed an obscure figure—or completely unknown—to claim Cleopatra as a more effective ruler demonstrates a lack of understanding of Egyptian history. Hatshepsut was a truly powerful monarch, ruling over Egypt when it was at the height of its powers. She created new trade routes deep into Africa, brought wealth and security to her borders, and commissioned new forms of architecture. Cleopatra, though well-known thanks to Shakespeare and Hollywood movies, was a minor queen ruling over a failing country. Egypt under the Ptolemies (a Greek dynasty imposed by Alexander the Great) was no longer a major power in the region. And those already diminished borders shrank even more under Cleopatra.

Prose asserts that Cleopatra was intelligent and effective, but she doesn’t offer historical evidence to back up those claims. She admits that Cleopatra hurt her people with unfair taxes and didn’t repeat that mistake during a second bad harvest period. That’s about as good as it gets.

What Cleopatra did do well was manipulating powerful men to do the things she couldn’t. Prose quotes aptly and deeply from ancient sources to lay out the narrative of Cleopatra and Julius Caesar, followed by Cleopatra and Marc Antony. But this isn’t the story Prose wants to tell. She wants the relationships to be romantic, to be genuine, not calculated. They may have been, but there’s no evidence either way. One can only look at the results, not assume the motives.

Prose also stumbles when she accuses the ancient Romans of exoticizing Egyptians—and Cleopatra specifically—as “Eastern.” But the Ptolemies were Greek, not exotic at all. And Egypt wasn’t seen as the “other” that Prose wants to present. Its main importance was as a provider of grain to the Roman legions. She also mentions Palestine as a territory controlled by Egypt when no such place existed. Her map and a later mention use the correct name, Judea. These are both instances of imposing contemporary values on ancient times, something an historian is supposed to avoid.

The historical elements work best in tracing the murderous relationships between the ruling, fighting Ptolemies, none of which shows off Cleopatra in a particularly good light. The most effective part of the book is when Prose steps outside of history entirely and casts a critical eye on how books and movies made Cleopatra into a villain.

“One could dismiss this vapid film with its brainless ingenue Cleopatra as the flip side of the coin, the opposite of Cleopatra as the evil seductress. When the subject is a woman, the options are all too familiar: she is either the virgin or the whore. For centuries, the Romans told us she was the latter, but in this film it is more useful for the story line to make her the ingenue.”

Cleopatra has offered a blank slate for men to shape her as best served their uses. Prose now takes a turn, offering up a different Cleopatra, one formed by Prose’s own feminist sensibilities. The real Cleopatra, however, remains as unknowable as ever.