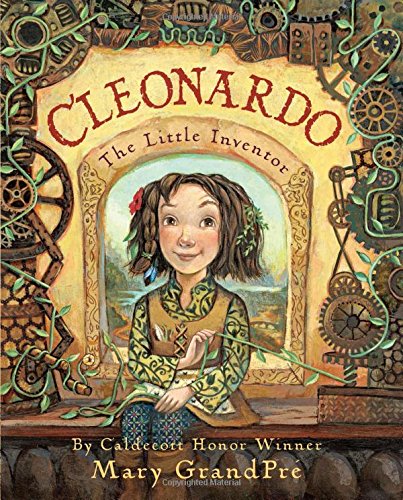 Better known to many as the original illustrator of Harry Potter, Mary GrandPré has illustrated over 20 picture books and here is handling both the words and pictures. The result is a picture book that’s dazzling to look at, while conveying a message of girl power in a STEM vein.

Geonardo the inventor dotes on his daughter Cleonardo and lets her watch his work. Cleonardo also wants to be an inventor and is full of great ideas, most of them involving vines and sticky plants. When Geonardo gently declines her help in creating his invention for the town’s Grand Festival of Inventions, she reacts as any true inventor would:

“So Cleo Wren decided to make something of her own for the festival. The forest was full of treasures, from golden goo bamboo and tacky termite twine to poofy cloud feathers and glitter-winged butterflies.”

With the help of her Grandpa Leo, Cleo creates a tiny whirligig that can fly. This leads to an idea for an even bigger project, which she jumps into with both feet. Meanwhile, Geonardo misses having his daughter by his side. Because he calls her his “little bird,” he lights on the idea of creating a mechanical bird that will both charm the festival’s judges and bring his daughter back to the workshop.

GrandPré renders the pair’s creative journey in rhythmic language and in luminous jewel-toned paintings that evoke the Renaissance. “For three days and nights, daughter and father worked on their soon-to-be prize-winning inventions. She twisted, twirled, perched, and puffed. He hammered, honed, wired, and welded.”

When they finish, father and daughter individually head off to the festival with their wondrous inventions. Geonardo’s mechanical bird swoops and circles over the square, and Cleonardo sees golden letters spelling out her name on the bird’s belly. But when a gust of wind sends the bird swerving out of control, heading straight for the mayor, she acts when everyone is frozen with fear. Cleonardo releases her own invention, a mesh “moon” filled with butterflies.

The moon blocks the bird once, but it’s not maneuverable, and once again the mechanical bird threatens to crash and injure someone. This time, Cleonardo releases the tiny whirligig. “Up, up, up it zoomed, like a spiky-tailed armored beetle”—until the whirligig catches the moon and pushes it directly into the bird’s path, caging Geonardo’s runaway invention and carrying it safely away.

Although neither father nor daughter wins the contest, they win something more valuable: each other’s company and respect. The book ends with them working on marvelous new creations blending his gears and her natural materials.