Class Lives: Stories from Across Our Economic Divide 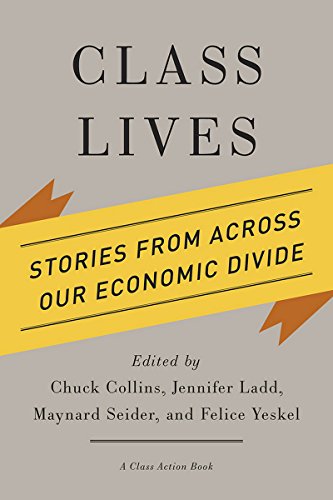 “multiple voices use the power of story to tell their Class Lives as both noun and verb.”

“Class is the last great taboo in the United States” asserts Felice Yeskel in her introduction to Class Lives: Stories from across Our Economic Divide. Like the elephant in the room, everybody is aware of it but nobody wants to talk about it in a presumed meritocracy where all are supposed to have a chance to climb the economic ladder and live the American dream.

Yet class identity permeates almost every aspect of our lives, from how we speak, the education we can access, the friends we make, our quality-of-life chances, and what we dare to dream. Class is innately relative and relational framing both how we see and how we are seen; however, our foundational myths of democracy, mobility and individualism have inhibited the development of a shared language around the role of class in shaping both opportunity and self-image.

Class may be defined according to objective criteria. For example, some academics categorize by occupation or frame class in terms of power, ownership and control of the means of production and labor. Others rely more on subjective self-identification. Still others look at class as attitudes, values, consumption, or culture, often simply inferring from behavioral clues.

As editor Yeskel puts it: “Average people often read class into whether someone drinks beer vs. white wine, lattes at independent coffee shops vs. coffee at Dunkin’ Donuts. . . . In short, there was no agreed-upon definition of class. No wonder class was hard to talk about; we weren’t even sure what we were talking about.”

Class Lives is an attempt to build a common discourse via an anthology of original narratives about lived experiences of class by writers from a range of ethnicities, ages, occupations, races and gender orientations across the United States. Despite disparate backgrounds, the authors have a common focus on their individual awakenings to the salience of class and their own place in the system and point to ways of transcending the pervasive classism around the social status pigeonholes they were assigned.

Born into poverty, working class, middle class, owning class, or mixed class the contributors trace their class journeys in life story vignettes that are very personal, powerful and often deeply moving narratives of how they came to grips with their past, live their present and negotiate their future.

This tidy organization into five class categories from across the spectrum helps the reader to draw patterns from what might otherwise read like a hodgepodge of memoir fragments from 40 authors. This framework is especially useful as the editors eschew the use of an explicit theoretical approach to class structure, allowing the writers speak for themselves.

We hear first from contributors born into poor and low-income families. Often they write more about stigma, shame, and the loneliness of feeling different by virtue of their talents and ambitions, than about the economic uncertainty of life on the margins.

For these individuals, “Did you eat the cheese?” resonates as a powerful indicator of position on the class spectrum, referring to the processed foodstuff that the U.S. government provided to welfare and food stamp recipients in the 1980s and early 1990s. “If you ate the cheese, you know who you are.” Others tell of humiliation over unfashionable clothes, free lunch tickets, and poor, even abusive home environments.

As one contributor writes about her rural Canadian childhood:

“Survivorship is a gift of my poverty-class upbringing. Resiliency, the ability to take the blows and come up swinging. Empathy, generosity, an open heart; things you acquire from being rejected, doing without, and carrying a burden alone.”

The contributors from working-class origins tend to have a finely tuned sense of class as a continuum, where it is possible to move up and down the hierarchy as key resources are won or lost. Higher education tends to be seen as crucial in achieving economic security, though this requires a whole new set of adaptations to the predominantly middle-class or owning-class sub-culture of college, often while dealing with increasing alienation from family and friends.

Anxiety often pervades these stories as “having worked hard and proved they had the right stuff, and now situated in a gentler world where ideas and fair play dominate, they wonder if they really belong.”

Others highlight the material and psychological benefits of upward mobility, focusing on what it means to have a car, a home of one’s own and access to health care, or draw out the more subtle indicators of class divisions. “One definitive marker of social class is whether you know how to eat an artichoke.”

The diversity of the middle-class contributors underscores the elasticity of this fuzzy category. Some are established in the upper echelons, while others are new to relative privilege and live in dread of reversal of fortune. It is all about appearances and fear of cracks in the veneer of respectability in which “who you know and how you talk” is the name of the game.

One upper-middle-class contributor writes eloquently on the significance of this kind of social and cultural capital even in the non-profit sector where, ironically, there seems to be a bias toward hiring staff from privileged class backgrounds.

“At an early age, I was introduced to the idea that an ‘Oreo cookie’ was sometimes more than just a sweet treat . . . used to describe someone whose race was black but whose values and orientation were white—black on the outside; white on the inside.”

The owning class refers to people who possess substantial wealth, either from old or new money. Contributors tell of the advantages and challenges of growing up with unlimited social capital as well as all that money can buy. They focus on how they have come to terms with their privilege and have recommitted in various ways to working towards making the world a fairer place.

“Guilt is my companion. I worry about embodying the entitlement and elitism that are stereotypical hallmarks of my class.”

Lastly, we hear from informants from mixed-class backgrounds because of marriage, migration, mobility and the like. Such hybrid experiences can be both a curse and a blessing, as the challenges of crossing classes can be highly stressful and require a lot of role juggling, while the ability to see issues from plural perspectives is an obvious plus in terms of bridging class cultures.

Before most of us can build such bridges we must first demolish the myth that America is a classless society and learn how class is experienced on a daily basis under the ever-increasing diversity and inequality of globalization. And that is what this anthology is all about, as multiple voices use the power of story to tell their Class Lives as both noun and verb.

Clearly, we do not and cannot “melt” into a uniform amalgam in the infamous American pot; however, we do need to work together in concerted social action to mitigate classism in all its guises. This book is a clarion call, awakening readers to the pain and injustice of discrimination at the intersection of class, race, and gender and the imperative of further conversation in a language we can all understand.