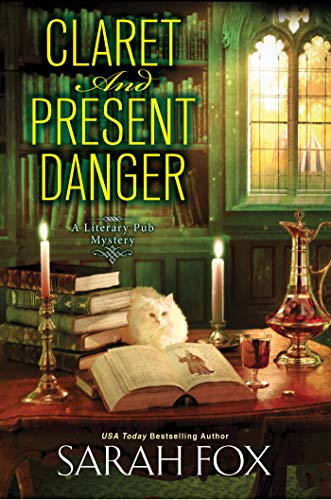 Cozy mysteries come in all stripes and appeal to a variety of readers. This one, book 4 of the Literary Pub Mystery series, cleaves strongly toward readers who like their cozies very cozy more than anything else.

Sadie Coleman left behind a troubled life and bought an old mill in Shady Creek, Vermont. She turned it into a book-themed pub called the Inkwell, where she serves food and drinks with punny names like Happily Ever After and The Secret Life of Daquiris, and hosts book clubs and other group activities. The pub is a continuously growing success.

It helps that Shady Creek is a busy and social little town. Both locals and tourists gather for not just bookish events but also myriad cultural or entertainment ones. In each volume, of course, somebody gets murdered, allowing Sadie to serve as the series amateur sleuth.

For Claret and Present Danger, the main event is the circus coming to town. Technically, it’s a Renaissance Faire, but to widen its attraction, the organizers have added more circus-like elements such as a magic show, acrobats, and trapeze artists.

The illusionist is the headline attraction, despite being an arrogant, womanizing you-know-what backstage. Somebody objects to his attitude and behavior enough to poison him, causing him to drop dead publicly in the middle of his act.

Sadie happens to be in the audience when his demise occurs. One of her employees is accused of killing him and hauled off to jail. Sadie feels compelled to clear his name, so off investigating she goes.

Which is where the story starts to sour.

Cozy readers who desire plausibility in their mysteries will likely be put off by Sadie’s mode of sleuthing. Unlike most cozies, wherein the main character gets involved reluctantly, and suffers doubt, regret, or consequences for sticking her nose in, Sadie seems to feel it’s entirely her right to go probing around where she is unwanted and unneeded, with no more consequence than being scolded by the police.

Indeed, her disrespect for the law and ignorance of or disregard for boundaries are uncommon in the genre and may provoke some readers. Her first objectionable mistake is walking into somebody’s trailer when they’re absent and rummaging through their stuff for clues just because she’s curious. Her self-justification for doing so is unpersuasive, and her legal right to trespass is nil.

Additionally, while she repeatedly claims righteousness in terms of needing to clear her employee’s name, she fails to help that person directly by attempting to visit him in jail, support his family, ensure he has a lawyer, or otherwise reach out in kindness and concern. She just goes snooping on his behalf without his knowledge or desire, investigating areas any detective or attorney would routinely cover. This makes it difficult to find her a sympathetic protagonist.

Meanwhile she dismisses all warnings-off by the police, considering the officers she interacts with petty for lecturing her, and likewise ignores admonitions from her friends, family, and boyfriend. Those who aren’t cautioning her do the reverse by treating her nosiness as a cute idiosyncrasy.

On top of Sadie’s naivete and disdain, she’s also an ineffective sleuth. Like many modern heroines, she relies on her smartphone, yet she doesn’t think to use it—or the computer in her office—to research one of the few concrete clues to come into her possession. That is, the name of the plant responsible for poisoning the illusionist.

Two minutes on the internet would tell her what it looks like, where it grows, how it can be made into a poison, the symptoms of poisoning, et cetera, which might lead her to identifying the killer. Instead she relies on a pal to send her a single image of the plant then wanders the fairground periphery trying to find it with no idea of its characteristics or season. Savvy mystery readers may find this absurd.

The novel includes abundant details about costumes and outfits, shop decorations, foods and drinks, chitchat conversation, minutiae of movements—but a dearth of information about the setting. The story could take place anywhere with trees and multiple seasons. A few cliché details are thrown in, such as Vermont having leaf-peepers in the fall and maple syrup in the spring, but aside from that any small town in America with a tourist trade would serve the story’s purpose.

In sum, this novel is for readers who like the idea of an ordinary person solving a mystery that eludes the police, and want a light, entertaining read. For readers who want their cozy mysteries grounded in reality and logic, and who enjoy learning about a new locale, the book does not deliver.