Civilian Warriors: The Inside Story of Blackwater and the Unsung Heroes of the War on Terror 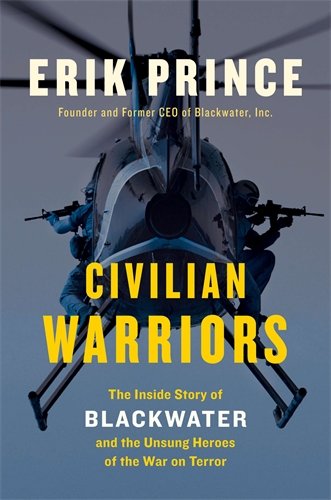 “In his long-awaited memoir, Blackwater founder Erik Prince offers an alternative view of his much-maligned company, and he backs it up with extremely compelling evidence.”

Most adults in the United States who did not spend the first decade of this millennium in a black hole will instantly recognize the name Blackwater. For many, that infamous moniker carries with it the picture of an army of remorseless killers in black SUVs accountable to no one but their profit-driven masters.

Looking deeper, though, it seems odd that the name of a real U.S. corporation that employed real Americans—many of whom were decorated combat veterans—should evoke such over-the-top imagery better suited to the shadowy villains of a Hollywood blockbuster. In his long-awaited memoir, Blackwater founder Erik Prince offers an alternative view of his much-maligned company, and he backs it up with extremely compelling evidence.

In Civilian Warriors, Prince details Blackwater’s rise from tenuous beginnings as a military training provider to becoming the dominant U.S. security contractor abroad, and then its ultimate demise amid a series of public scandals and criminal investigations. His narrative includes dramatic accounts of his company’s most controversial engagements, with details previously denied to the public because of State Department restrictions.

With primary source evidence like depositions, emails, and contract excerpts, Civilian Warriors sheds light on numerous misstatements made by misguided politicians and a sensationalist press, and disproves the outright falsehoods that have permeated the blogosphere for nearly a decade.

In addition, an afterword by military historian Max Boot explains Blackwater’s connection to the CIA, a connection that caused public blame and criminal charges to fall on the company. According to both

Prince and Boot, in those cases Blackwater’s executives were unable to defend themselves outside of closed-door hearings because of their non-disclosure agreements with the intelligence agency. Boot’s addendum to the text became necessary because Prince is still barred from discussing his company’s relationship with the CIA in any substantive manner.

Alongside the Blackwater story, Prince reveals his personal journey. He memorializes his father, who built a successful, family-friendly business in the automotive industry, and describes his own efforts to mirror that success in the defense sector. He shares the advent of his faith, the joy of his children, and the romance and trials of two marriages. He also adds anecdotes from within Blackwater—entertaining stories that return a human face to a company made out to be a monster in the press.

In all, Civilian Warriors is part political expose, part military thriller, part legal thriller, and part business guide, with triumphs and tragedies that will leave readers laughing at one moment, outraged the next, and totally unable to set it down.