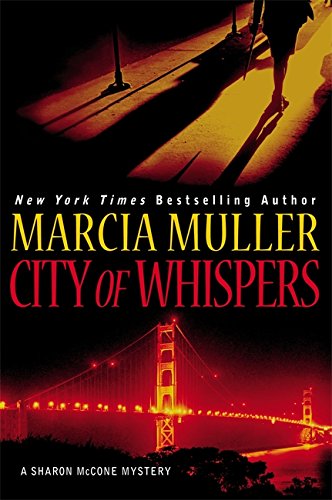 “In City of Whispers, volume 29, Ms. Muller continues to deliver what she’s known for . . . Fans of Sharon McCone will welcome her next adventure. Folks new to this series will find a well-crafted story and likable, memorable characters who will likely inspire them to explore Ms. Muller’s impressive backlist.”

Marcia Muller likes to go where the average person doesn’t, and she takes readers there through the adventures of her mystery series heroine, Sharon McCone. In an extreme case two volumes ago, Ms. Muller threw Sharon into almost everyone’s nightmare: a gunshot wound to the head resulting Locked-In Syndrome, in which the entire body is paralyzed except for the eyelids and the mind.

Happily, Sharon recovered (yay for fiction!) and is back in the PI business, this time searching for her half-brother who is on the skids—and, as it turns out, is inadvertently involved in an unsolved murder case that comes at Sharon and her operatives from a different direction. Both situations start overlapping early in the story and braid together by the end.

In City of Whispers, Ms. Muller again takes readers into uncomfortable territory by including the viewpoint of Sharon’s psychologically damaged, drug-addicted brother. She doesn’t wallow in his misery, though.

The book cycles rapidly through multiple viewpoints, with Sharon’s in first-person voice and everyone else in third-person, so that she remains featured. Her brother’s voice helps us understand her motivation to help him, despite his seeming worthlessness to others, plus explains how he leaves clues that Sharon’s team follows.

Their viewpoint rotation allows the plot to advance steadily forward, which is helpful in a procedural because different characters are on the job in different places at the same time while the story needs to be linear. As well, we get to know the characters better by being inside their heads. Each operative in Sharon’s agency has a different function and background (and relationship with Sharon, often by blood) that contributes to the story, allowing readers to experience the inner workings of both an investigation and complex personal relationships, and how they affect each other.

Not that Ms. Muller skips the details; rather, she selects them carefully and sprinkles them through the narrative in bits that don’t break the pace. For instance, in a scene where Sharon goes to interview a key suspect, Ms. Muller uses only 94 words to set the stage, give insight into her lead character, and provide hints about the upcoming villain while moving Sharon from point A to point B in downtown San Francisco:

“The DeLucci Foundation had a suite on the forty-ninth floor of 555 California Street, formerly the Bank of America Tower. I had hurried up the wide steps to the plaza, past the black granite sculpture titled Transcendence but locally nicknamed The Banker’s Heart. To me it has always resembled a turtle shell, reptiles being as cold-blooded as financiers.

“The foundation’s suite was not a large one, but it was well appointed: thick beige carpets, leather furnishings, good lamps, and an elaborate tansu chest, which I envied, having recently developed an interest in Japanese furnishings.”

Then, immediately, on with the story. In similar by-the-way moments, we learn something about what keeps Sharon and her husband on the warpath against bad guys (“I don’t discriminate when it comes to evil”) and the core concept behind both the plot of this novel and most of the series:

“Secrets, I thought. Most said money was the root of all evil, but in my experience it was secrets—many of them not involving cold, hard cash.

“The stupid, harmful things that people do to one another and then feel compelled to cover up. The hidden knowledge that gnaws at them. Such knowledge causes emotional and mental illness and all too often results in violence against the self or others.

There are enough secrets in the world to drive endless plots, so we can surely look forward to more in the Sharon McCone series. In City of Whispers, volume 29, Ms. Muller continues to deliver what she’s known for: systematic investigations with just enough human irregularity to keep them interesting and believable; intelligent, well-rounded characters, featuring a woman who is often credited as being the first female private investigator in fiction; and originality of circumstances woven into the predictable elements that this genre requires.

Fans of Sharon McCone will welcome her next adventure. Folks new to this series will find a well-crafted story and likable, memorable characters who will likely inspire them to explore Ms. Muller’s impressive backlist.