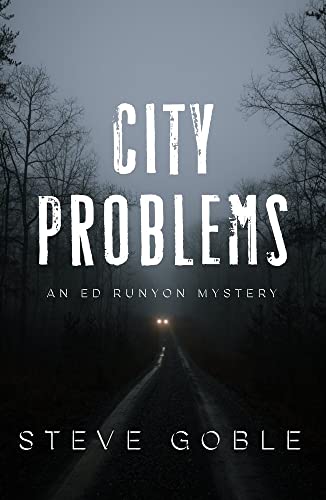 Meet Ed Runyon, a cop with a heart, though he doesn't always show it.

Okay, so he drinks a bit too much, and has an eye for the ladies. And he gets in bar fights, too, but he usually doesn't start them. However, he's a good finisher, and he gets things done. He's the kind of cop you'd want looking for you if you ever go missing. The kind of guy your mother tells you not to date, although she might if she's recently divorced your dad. Runyon is charming, glib, and tortured all at the same time. Cougar bait.

He moved to small town Ohio after his failed attempt to locate a missing teenage girl in NYC. There's lots of crime there, so much so that he was too busy to put in the hours necessary to find her in time. Now that he's a detective with the Mifflin County Sheriff's office, he's left those city problems behind.

Or so he thought.

One Saturday night, high school junior Megan Beemer goes to a warehouse party attended by a bunch of nogoodniks and doesn't come home after. Runyon is assigned the case. He doesn’t want it.

". . . reminded me too much of another girl, in another place, who was not so pretty when we finally found her. That was the night I left the big city, full of bourbon and mental pictures I could not erase. I hate thinking about that night. I had spent a great deal of time and effort learning how to not think of that night."

Michelle Beckworth, an investigator with the Columbus PD comes up to Mifflin County to help on the Megan Beemer case. Shelly is an attractive no-nonsense investigator that Runyon is semi-curious about until she tells him she has other inclinations, so he keeps it professional. Besides, he already has Linda, a friend with benefits.

Clues are scarce and there are dead ends aplenty. For every question Runyon is able to answer, dozens more come up.

Goble has put together an extremely enjoyable read. There are lots of characters in the book, all named, even the secondary and minor ones, and the author has made them all interesting. Here Runyon interviews a witness:

"Ally Phelps was a waif, a freshman dressed in jeans and T-shirt and topped with wild back hair streaked with yellow. . . . The T-shirt was adorned with a demon, who was either trying to swallow a cat or coughing one up. . . . Once I fought for a glance beyond all the mascara, I saw that her eyes were brown. One might describe her overall aesthetic as 'pissed at the world.'"

This is Tess Baldwin:

"At the fourth trailer, a woman opened the door seconds after I knocked. She had a pistol in her hand, aimed at my face. . . .

"‘. . . I noticed that she was blonde, skinny, wearing a huge T-shirt and nothing else. She probably was between forty and fifty years old. I saw no needle tracks on her arms, and no drug paraphernalia anywhere within sight. . . . The scent of warm screwdrivers rode every exhalation."

The author's wordsmithing is magnetic from the very first pages, which are written in the victim's point of view while she's being driven away from the party. Goosebumpy!

Goble surely has a winner in this book. Ed Runyon is easy to fall in love with.

But readers beware—the overabundance of profanity could be a deal breaker for some. Who talks that way in real life? Maybe teenagers trying it out. Cops? Certainly not all of them.

The unnecessary passive aggressive political digs dropped in the dialogue threaten to offend a good number of readers, too. But if they can get past all that, they'll have no trouble relating to Steve Goble's new hero.