City of Omens: A Search for the Missing Women of the Borderlands 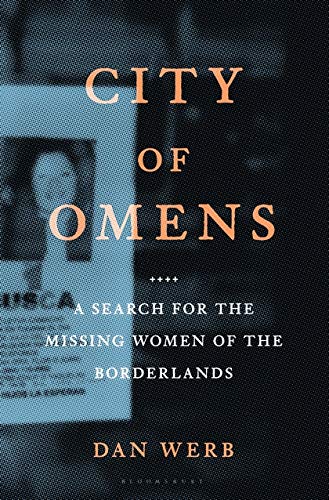 “Werb deftly captures the grim void of life among the disposable human detritus of a state governance apparatus more interested in its own power and enrichment than the lives and livelihoods of its poor.”

Epidemiology is the study of epidemics through the exploration in the disruption in the relationship between host, environment, and pathogen that starts as a mystery in need of explanation. Dan Werb’s work in the socio-ecological margins of Tijuana began with an interest in the spread of HIV through intravenous drug use among the denizens of the Tijuana River Canal and the North Zone with its red light district. That interest quickly pivots to the disappearance of sex workers in epidemic proportions.

His writing is vivid, not what one would expect from an epidemiologist. Take, for example, his description of his first descent into the canal:

“A bracing stink rose to meet us. As we approached the encampment we passed a solitary man in the center of the canal, shirtless in the sun and standing ankle-deep in the noxious brown wastewater. His old pants were cinched up above his knees and slick white foam spread in clumps along the water’s oily surface and circulated around his bare legs. He leaned down, drenched his t-shirt in the sewage, and splashed it across his bare chest.”

Werb deftly captures the grim void of life among the disposable human detritus of a state governance apparatus more interested in its own power and enrichment than the lives and livelihoods of its poor.

Many of the IV drug users he met were also women working in the sex trade. At the intersection of drugs, gender and poverty, he begins to uncover another public health disaster—the disappearance of women in epidemic proportions. Tijuana is a violent place, but one where there was once predictable stability in the plaza system (areas controlled by the cartels in league with police and politicians). Plazas begin to fall apart in the early to mid-2000s with new competitive cartels that successfully infiltrate the governance and security system. Plazas collapse with the Mexican war on drugs initiated in 2008. Violence against women and the emergence of a “femicide” coincides with those changes.

In 2015, the murder rate among women was 40 per 100,000. In neighboring San Diego that rate is 1.4 per 100,000. The most vulnerable are IV drug-using sex workers who independent contractors who have no protection in the form of a pimp. They wind up going with anyone anywhere in a world of male impunity.

Tijuana, like all border cities, is a magnet for women from elsewhere in Mexico, as well as Central America. They are drawn there by the maquiladoras (off-shore manufacturing plants that take advantage of loose regulation of environmental and labor laws). Others land there in the hope of crossing into the United States and get stuck. Some arrive to work in the sex trade for which the city is famous.

Many possible pathogens lurk in wait for women—HIV, murder, environmental toxicity, hepatitis C, overdosing. One of the most dangerous vectors is the police, as well as the narcos. Cartels and the polic coalesce around the fancier brothel-clubs. Sex-trade workers outside of that orbit on the margins are fair game and seen, as Werb puts it, as “pests.”

To find the pathogen, or constellation of pathogens, epidemiologists build statistical models from big datasets (i.e., working hypotheses about the way the world works in simplified form). Though they are looking for causality, epidemiologists look a lot more like social scientists than bench scientists. They operate in a world that is filled with all manner of variables knocking together, and in real time to boot. It is a challenge to sort out what variables are important, let alone what is causal. Human social systems are, in sum, complex, dynamic, and contingent.

Like social scientists, epidemiologists are studying nonlinear dynamic systems (the stuff of Chaos Theory). The goal, then, is not to find direct cause and effect (If X then Y). Rather it is to find patterns that lead to prediction (X hangs out with Y enough times to be important). The process is iterative, constantly filling in the gaps in the data, searching for the important variables, building up a model, realizing that certain assumptions are not correct, revising and fine tuning the model.

The portrait that emerges of women, sex workers, and the North Zone of Tijuana is one of shifting risk, threat, and precariousness. In the 1990s and earlier, it was the police and petty criminals who were the main perpetrators of threat and violence. By the early 2000s, risk and threat were all around; it went from being identifiable and managed to fog-like and everpresent. As Werb notes, “the most dangerous epidemics are those driven by pathogens that become more virulent over time.”

First, the sheer number of poor women migrating to Tijuana in search of maquiladora jobs soared. Sex work is often the only real option when they are unable to find legal work, lose their legal job, or need to supplement their meager legal income. There were simply more women at risk.

Third, there is an ever-shifting relationship between the police and the cartels that ranges from being completely complicit to antagonistic.

Fourth, the cartels have dominant control of the city, thus raising levels of impunity and lawlessness. As Werb so succinctly describes it, “the social pathogen was a kind of shamelessness, coming in waves over time, that led people to indulge in multiple destructive impulses.” The “shamelessness” is an unstable and contingent set of social factors, actors, and materials: corrupt police, violent cartels, desperate sex workers and equally desperate clients, HIV and hepatitis C on shared needles and syringes.

Dan Werb has crafted a finely wrought exploration of public health sleuthing and social justice activism. His analysis is animated by many voices, but the most stunningly powerful are those of the IV drug user sex workers who are participants in this study.

The book closes with the emergence of a new HIV hotspot that Werb’s team traces to a shooting gallery—Las Llantas (The Tires). Police action has caused IV drug users to scatter and they recongregate back into a sprawl of lots and shacks. New cartels have also introduced new drugs. China White heroin replaces black tar. The latter has to be heated to melt it burning off impurities in the process. The former is simply dissolved in water leaving live viruses in the syringes and needles. This is the hotspot epicenter.

Women entering the sex trade drug scene world are doing so at a very dangerous time in the arc of the HIV epidemic. It is also a time when violence and murders are dramatically escalating—new cartels vying for turf in an increasingly balkanized landscape. Thus the epidemic is not abating either.

In real-time society, variables alter and their relationships shift in a highly contingent world. Poverty, inequality, and gender coincide in new ways. Werb closes the book circumspectly, “[epidemiology] is done in the hope that from past death some meaning, at least, might be gleaned, to stave off the deaths to come.”