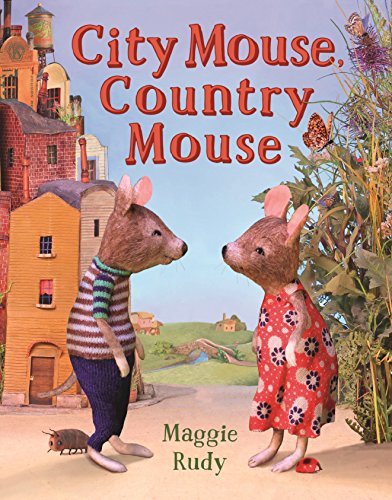 “Rudy has illustrated her picture book with an elaborate world made of fabrics and scavenged materials, and populated it with handmade felt and fur mice . . .”

In City Mouse, Country Mouse, author and illustrator Maggie Rudy puts a modern spin on the classic tale of the city mouse who is uncomfortable with the unfamiliar environs of the country and the country mouse who is overwhelmed by the frenetic hustle and bustle—and inherent dangers—of city life.

The original tale is credited to the ancient Greek fabulist Aesop. In that telling, the proud town mouse scoffs at the simple country fare served by his rural cousin. He invites his lowly relative to the city to experience the bounty and sophistication of a metropolitan meal.

All is well until two dogs bound into the room, terrifying the mice, who hasten to safety. The moral? Security is better than opulence, or as the 13th century English preacher Odo of Cheriton put it, “I’d rather gnaw a bean than be gnawed by continual fear.”

In Morall Fabillis, the 16th century Scottish poet Robert Henryson’s version retells the story in verse, concluding that a life without dread is blessed and it is better to limit one’s ambition and one’s appetites, “Blissit be sempill lyfe withouttin dreid; Blissit be sober feist in quietie: Quha hes aneuch, of na mair hes he neid . . .”

Better known to modern children is Beatrix Potter’s The Tale of Johnny Town-mouse with her exquisite watercolor illustrations and gently told tale. Instead of moralizing, Potter concludes her story saying, “One place suits one person, another place suits another person. For my part I prefer to live in the country like Timmy Willie.”

In Rudy’s fresh take on the tale, the two protagonists meet when Tansy, the country mouse, mistakes city mouse Will Gray’s tail for a caterpillar. Quickly the two become fast friends. Will stays with Tansy in the country until he misses the city too much and invites Tansy to come with him there.

She agrees to go, and at first loves the wealth of choices for things to see and do there. But before too long, Tansy grows homesick, missing the country. She longs to go home.

The best friends have met an impasse in their relationship, and they reluctantly go their separate ways. After months apart, missing each other desperately, they find a compromise, meeting in middle ground between their two extreme positions. Each makes sacrifices to be near the friend they treasure so much; they find a give-and-take arrangement that works.

Rudy has illustrated her picture book with an elaborate world made of fabrics and scavenged materials, and populated it with handmade felt and fur mice, and real plants in the country scenes. She builds her sets to illustrate each scene in the story, carefully positions her characters, and photographs them.

Particularly pleasing are the facing pages that show the contrast of Tansy the country mouse’s life, and the city life of Will Gray. On the left page, Tansy is perched on a soft dusty Miller plant, surrounded by meadow grasses, flowers and flitting butterflies. On the right, city mouse Will Gray is standing under a street lamp, watching moths circle around the light.

The details in the more complex images are delightful. Study the nature scenes to find creatures such as snails, grasshoppers, and toads hidden among the foliage.

In the city, which is populated by mice and other animals (look for a mole wearing dark glasses for the blind), a laundry line from an upstairs window stretches over a poster pasted on the brick wall to advertise Wally’s Whisker Wax. In a coffee bar, the barista mouse pours a foamy cappuccino into a cup.

Notice also the exquisite expressions on the faces of the mice in each scene. Rudy has captured looks of wonder, eagerness, mournful sadness, and intense conversation. These mice are creatures we can care about because we recognizable their feelings.

Celebrating the merits of compromise—and allowing for a “happily ever after” ending—this less preachy version of Aesop’s tale is more appealing to most modern readers than the ones advocating avoiding risk and lowering one’s expectations. And when all is said and done, willingness to compromise in human relations is not a bad lesson to learn.