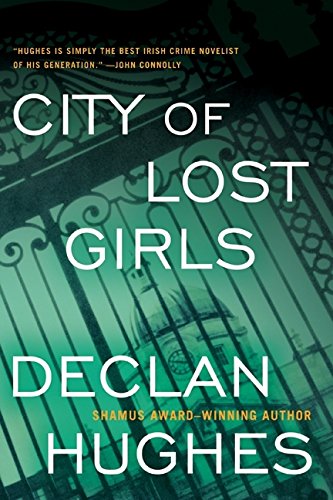 Dublin’s private investigator, Ed Loy, is back and in top form in Declan Hughes’ new crime mystery, City of Lost Girls. The opening pages of this gripping novel commence with the serial killer’s soliloquy, and in the skilled hands of Hughes it is both authentic and extremely disturbing. Ed Loy, once a familiar sight in Los Angeles for over two decades, has now settled back in his hometown of Dublin for several years. Work is steady if not plentiful, and he’s in a loving relationship with a woman named Anne Fogarty. It’s been a long time since he’s had any sort of relationship, since the death of his daughter caused the ruin of his marriage six years ago. Loy’s long-time friend, legendary American film director, Jack Donovan, is shooting his next movie in Dublin, but it’s not too long before production on the set grinds to a halt when two female cast members fail to show up to perform. While most people dismiss the absenteeism as nothing more than party girls sleeping off drugs and booze, Loy’s almost infallible antennae tell him something is amiss, and an eerie familiarity begins to permeate his wary bones. Twenty years ago, three young girls disappeared from a movie Donovan was shooting in Malibu, and their bodies were never found. Mere coincidence? Or something far more sinister? Loy soon suspects the latter, believing that one of the film crew is responsible for the girls’ disappearances and could well be the notorious Three-in-One Killer, the elusive murderer of the original young trio in Malibu. Loy doesn’t want to think of the possibility that Jack Donovan is somehow involved, but the more he digs, the more Donovan’s name scoops up with the bloody dirt. Loy fights against time to uncover the truth before a third girl goes missing in Dublin, but in order to find that truth, he must return to his adopted city of L.A. and delve deep into a past he would much rather forget, hoping that whatever he finds will point away from his old friend, rather than toward him. But while he’s searching for clues in L.A., a relentless killer seizes the chance to strike at what’s closest to Loy’s heart. In City of Lost Girls, Hughes expertly interweaves the various threads of this story with narrative verve and muscular prose, never losing control, and always keeping the reader fully involved. The depiction of police procedure on both sides of the Atlantic is entirely credible, giving the reader no reason to question the underlying mechanics of either of the investigations into the girls’ disappearances. The story is unfailingly compelling, with grisly murders, gangland psychopaths, and the uncomfortable sniff of incest thrown in for good measure. If you take one book to the beach this summer, just make sure it’s The City of Lost Girls.