City on a Grid: How New York Became New York 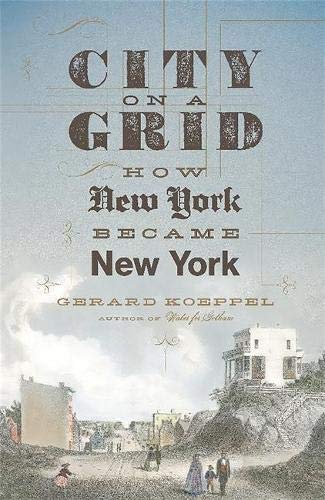 Gerard Koeppel's City on a Grid: How New York Became New York is a fascinating and curious story that takes us back through time to the early beginnings of the city called Nieuw Amsterdam by the Dutch, then renamed New York, on the island originally named Manahata by the Lenape indians. It is also a drama that delves into the lives and travails of the original surveyors like Casimir Goerck and visionary Joseph François Mangin, who mapped the island and saw it not for the city what it was, but the metropolis that it would become.

Koeppel unfolds a well-researched ambitious tale of intrigue intertwined with political significance as he tells of Governor Stuyvesant, Mayor Varick, Aaron Burr, the deliberations to arrive at street and block dimensions, how New York inspired a young Napoleon III to redesign Paris, why Houston (HOW-stun) Street is pronounced differently than Houston (HEW-stun) in Texas, the Roosevelts arriving 1644, and the royalist DeLanceys who forfeited their lands when they fled back to England at the start of the Revolutionary War.

Koeppel tantalizes with little known facts such as that the Lenape Indians sold the island of Manahata to the Dutch West India Company based on an estimated 22,000 acres. Little did the Dutch masters of commerce know that the Lenape actually over estimated the size of the island. Today the most generous measure of Manhattan is considered to be about 14,600 acres.

He also details the astounding power of city commissioners bestowed on them by state legislators in 1807, that declared the commissioners to “have and possess exclusive power to lay out streets, roads, and public squares,” that would intersect through existing properties and were given powers to determine financial compensation for each, and the ensuing bitter litigations with landowners.

Those of us who have walked and navigated the streets of New York City know the power of the grid. Its advantages are plain to the tourist, pedestrian, and business owner who requires easy access to his premises. And while Manhattan’s grid may not have the charming beauty of cities like Paris or Rome it exudes a different kind of power.

My only criticism of Gerard Koeppel's City on a Grid is that while it is undoubtedly a valuable resource for research historians, academics, and city planners it lacks sufficient images and color reproductions to make it galvanizing for the layperson. Although it does have 16 pages of black-and-white reproductions, mostly small drawings and paintings, the tale was so intriguing that more images would have made it a page-turner; however, it is a fun, fascinating, and accessible read for those curious enough to delve into the origins of an amazing city.