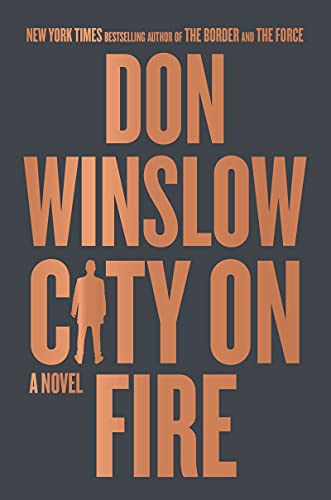 “City on Fire is a crime novel you won’t put down voluntarily. It’s an instant classic in the genre.”

Danny Ryan is a reluctant participant in the ongoing conflict between Irish-American and Italian-American crime organizations vying for control of Rhode Island in the 1980s. The son of the former head of the Irish gang, he’s been reduced to the role of a gofer and enforcer for the Murphy family, who now control the business that could have been his.

When the Italian mob begins to make its move to take over the island, a tense situation explodes into violence when a woman enters the picture, coming between rivals on either side of the conflict. Danny’s quest to settle into marriage, raise a family, and lose himself in clean, hard work on his own terms slips out of his hands as war erupts, pulling him into its vortex.

As the bodies begin to pile up, buildings burn to the ground, and brothers turn against each other, can Danny rise above it all without becoming what he most wanted to avoid in his life—the ruthless leader of a powerful criminal organization?

Don Winslow has written more than 20 bestselling novels, including The Force (2017) and The Border (2019). City On Fire marks the debut of a new trilogy that will follow Danny Ryan from Providence to Hollywood to Las Vegas as he builds the criminal dynasty he never wanted.

Winslow is on record as having said that this story has been working on him for a very long time: “This book has a long, slow-burning genesis. I’ve picked it up and put it down over the years, but always came back to it.”

The other aspect of this novel that he’s discussed at length is his use of classical literature as a model for the story, in particular The Iliad. The woman in the middle, Pam Davies, is his Helen of Troy, while Liam Murphy serves as Paris, and Danny’s mother stands in for Aphrodite. Winslow also leans heavily on Virgil’s Aeneid, with several quotations featured at the beginning of sections and Danny himself representing a modern-day Aeneas.

Winslow explains that he’s self-taught in the Greek and Roman classics, and that while reading Aeschylus’s Oresteia trilogy he saw themes also common in modern crime fiction. He was similarly inspired by Ulysses, in which James Joyce used The Odyssey as a foundation for his structure and much of his thematic material.

So what should we, the common reader, make of all this erudition? Should we feel dumb if we’re not getting the parallels, or should we take a crash course in the classics first before we dare crack open City on Fire, lest we miss out on the most important elements of the novel?

It all depends on whether Winslow has produced a weighty tome for the academics and thoughtful types in tweed jackets to mull over while puffing on their pipes and sipping fine cognac, or whether he’s written a novel to be enjoyed by everyday lunch pail crime fiction fans like you and me, who demand more than anything else a solid story with great characters that will make a memorable contribution to our favorite genre.

While the novel will certainly attract the attention of the former cadre, bless their elbow patches and thoughtful frowns, there’s more than enough meat on the bone here to satisfy those of us who are simply looking for a really great crime novel to engage and entertain us.

Danny Ryan is a compelling, well-drawn protagonist whose inner conflicts resonate as we follow him through each turn of fortune, some of them upward but most of them down. The story also has its share of suspense, even though it’s pretty clear things are not going to turn out well, and for the most part the narrative maintains a decent pace.

The setting on its own is a special feature of the novel. The Rhode Island beach where Pam emerges from the ocean as the novel opens is one Winslow has often walked himself in times of stress and grief, and many of the scenes in the book are set only minutes away from where he grew up. You can almost smell the fish and the baking clams and feel the wind and the ocean spray on your face.

As with many other stories that have taken several years to write, there are a few minor rough patches that should have been cleaned up along the way. The chapter that provides Pam’s backstory, for example, could have been condensed and slipped in somewhere else without slowing things down.

As well, the narrator’s use of bad grammar, sentence fragments, and east coast vernacular to assist in setting the atmosphere around his characters is not particularly charming or necessary, for the most part.

Nevertheless, City on Fire is a crime novel you won’t put down voluntarily. It’s an instant classic in the genre, and it sets the stage for what we fully expect to be an equally explosive sequel.