In the City of Bikes: The Story of the Amsterdam Cyclist (P.S.) 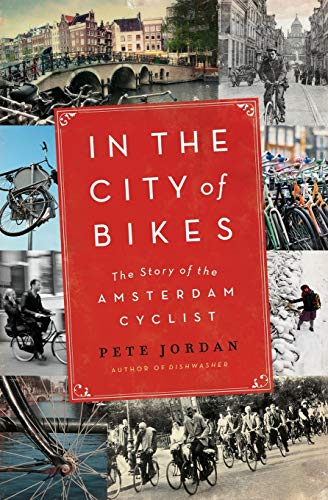 “For anyone contemplating visiting or living in The Netherlands, In the City of Bikes is a must read.”

From the very first page American narrator Pete Jordan gains credibility for his nonfiction accounting of cycling in Amsterdam by relating an incident of his first day there.

When he encounters an irate cyclist on what he thinks is the sidewalk but really is the bike path a woman calls him a “Klootzak.” Anyone who has spent any amount of time in Amsterdam and not been called an asshole for doing something outside of the customary way of doing things, well, that individual has not experienced Amsterdam as it truly is.

Mr. Jordan, admittedly a happy transient and avid cyclist, travels to Amsterdam from the U.S. to study urban development at the University of Amsterdam and is immediately enraptured by the city’s architecture but mostly by its preferred mode of transportation: cycling.

He wants to discover how to adapt a cycling infrastructure in the U.S. so what better place to do it than in Amsterdam, the city of bicycles? But as with most expeditions, surprises are apt to arise. Mr. Jordan uncovers some myths about cycling in Amsterdam.

Having lived in Amsterdam one would think that cycling has always been adopted there, but according to Mr. Jordan that has not always been true. Through a series of sometimes long anecdotes the author takes us from the beginning of bicycle use in Amsterdam when they were used only by the well-to-do given their cost.

The book is a woven basket of Mr. Jordan’s personal experiences of arriving in Amsterdam; studying at the University; awaiting the arrival of his wife, Amy Joy from the U.S.; starting a family with the birth of their son, Ferris; and starting a business, a bicycle repair shop, no less. But the personal takes a back seat to what the book is really about: the history-lite of cycling in The Netherlands, other EU countries, and the United States.

One of the more entertaining sections in the book is when Mr. Jordan talks about Brownie, his first bicycle in Amsterdam, a clunker. In anticipation of his wife joining him in weeks, Jordan buys her a bicycle and aptly names it AJJ for Amy Joy Jordan. He even writes AJJ on the tire wheel.

Jordan goes for a spin on AJJ and is christened a true Amsterdammer by having the bike stolen when he leaves it unattended, unlocked, and untethered to a stationary whatever—a newbie mistake. Again, living in Amsterdam, owning a bike, having it stolen—it’s a rite of passage.

Mr. Jordan then goes in to how the whole bike stealing operation works. Suffice it to say that it is very educational.

“This nondescript bridge—not dissimilar in look to dozens of other bridges in the city and with a span less than 25 feet long—stands where the Oudezijds Acherburgwal and the Grimburgwal canals meet. A bridge has spanned this spot since the 14th century; just a few steps away, Rembrandt once stood and sketched the Grimburgwal canal. While known in city records as the Gasthuisbrug (Hospital Bridge, in reference to the hospitals that had stood beside it for centuries), to many Amsterdammers it was notorious as “the Grimburgwal bridge,” “the bike bridge” or simply “the bridge, “for at the time, it was home to the city’s main open-air stolen-bike bazaar.”

To convey the extent to which bike thieves will go, Mr. Jordan relates the following anecdote,

“After a taxi had struck a 58-year-old cyclist on Van Baerlestraat, a trauma helicopter had rushed the biker to the hospital. During all the commotion, while the man had been lying unconscious on the street, some dirtbag came along and made off with the injured man’s bike.”

One can see that the author has adapted to The Netherlands culture because when Amy Joy’s bike has a flat, he says that she should fix it herself. In the land of self-serve this is very typical, and this expression of egalitarianism by the author once again cements his credibility with the reader. Mr. Jordan shows Amy Joy how to fix a flat and eventually she apprentices for a bike repair shop, culminating in buying her own shop!

Most especially enjoyable are the sweet anecdotes of the author cycling his son Ferris around and how the son discovers the city in front of his dad.

The author is so taken by the way Amsterdammers cycle that he employs a pastime of observing cyclists and counting them. How many cyclists run the red light, how many have night lights, how many ride holding hands, how many are nuns. Mr. Jordan likes to count.

They cycle to school, to work, to the Concertgebow, or to the concert building on Museumplein. They cycle in pairs holding hands, in evening gowns, in suits, in nun’s habits, in spike heels, in full-blown pregnancy. While biking they tow PVC pipe, chairs, luggage, groceries, plants, ironing boards, crates of beer bottles, people (called dinking), animals, another bike, etc.

“As a cyclist watcher in the 21st century, I was witnessing scenes that, in many ways, differed little from those a cyclist watcher of the early 1920s saw. This shouldn’t have been surprising, though, since the present-day riding behavior and attitude are but a lasting legacy of the riding behavior and attitude exhibited almost a century ago. The Amsterdam cyclists’ current reputation for being headstrong, careless, carefree and domineering became firmly established in the boom years of the early 1920s.”

The most engaging part of the book is when Mr. Jordan writes about the four-year occupation of The Netherlands by the Nazis during WWII. By this point cycling was fully engrained in Dutch culture, and the Nazis believed that the cycling habits of the population in the city were too loosy goosy, so they tried to institute regulations which Amsterdammers characteristically ignored.

Mr. Jordan talks about the cyclists as resistance fighters and that may be, but history has proven and even the author admits that there were some Dutch government officials who were Nazi collaborators.

Amsterdammers have always expressed anarchism when protecting their cycling rights, and to understand the Amsterdam cyclist of today one ought to know about their history.

In The City of Bikes offers an extensive bibliography, and it is clear that the author has done extensive research, but the book is not annotated to any exhaustive extent and in parts a quote’s source would have been useful to offer context.
The writing in the book is clear and concise and reads easily.

For anyone contemplating visiting or living in The Netherlands, In the City of Bikes is a must read. It goes a few steps beyond the usual travel book fare.