Citizen Sailors: Becoming American in the Age of Revolution 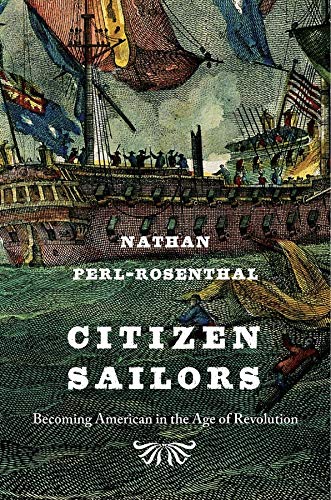 In recent years several writers have discovered the forgotten, ignored, or lost early maritime history of the United States. Nathanael Phibrick’s nonfiction In the Heart of the Sea is now a movie. Part of this change has come from how much America's present has come to increasingly to concern events in distant lands that echo in the past.

Nathan Perl-Rosenthal builds on this genre to bring into the age of sailing the beginnings of our modern issues of being American, boundaries at sea, citizenship, global economics, piracy, projection of power, and terrorism. Citizen Sailors provides a solid look at the greater history of the early 1800s.

The various triangle trades upon which nations and empires depended upon for survival required experienced seamen. The high mortality rate in that profession, as much as one-third just to drowning, made them a precious commodity—but especially because the global empires grew so fast as to outstrip the supply of experienced seamen.

In times of war, the military required sailors, too, and privateers captured crews with ships. The French registered sailors to meet military needs and Great Britain had its infamous press gangs. From ancient times, the ships had such diverse crews that they hardly meet any easily determined national identity.

By the end of the American Revolution, what had become the United States was already a major maritime society. It built many of the world's ships and its sailors fished, fought, hunted whales and traded in all seas. All of the new country's cities were seaports or nearly so.

While today we remember manifest destiny and the imperialist conquest of the frontier, another American history took place in ports and seas around the world. As the author wrote, the new country’s “merchant seamen not only became attached to the state earlier and more strongly than anyone else: they had a unique role in the long process of drawing a sharp line between American citizens and the rest of the world."

Recognition of citizenship, locally or internationally, could come from ancestry, language spoken, nativity, or regulated process although most people traveled about freely without need to prove national identity. In the age of revolution, the author writes, economics for seamen moved "nationally as their own choice to seeing nationality at sea as a status conferred by the state and provable only with government documents."

This problem of nationally in the New World began with struggles to determine enemy from neutral vessels in the wars of empire. Colonial smuggling further made nationally of crews and ships important. Determining friendly from enemy merchantmen became an issue in the American Revolution as thousands of government commissioned shipping raiders set out to capture merchant ships.

The book begins with the execution of two seamen captured from such a privateer. They had tried to avoid the noose by claiming American citizenship. To the British, they qualified for execution as traitors in either case but in reality martyrs for the cause of both American and Irish independence in the age of European revolution that would become universal during the following century.

The captain, however, argued that he was American born, although in what the British government still considered its colonies. Officials, after interrogating him at length, spared his life as a military necessity to prevent retaliation against British officers and he received exchange as a prisoner of war.

Citizenship became an excuse then, as it is today, for laws on other issues. America's original naturalization act had made becoming a United States citizen easy for deserters from foreign vessels. When captured by the Barbary Pirates in North Africa, for example, Americans claimed to be British to escape enslavement and receive exchange. The United States was too insignificant to fear and too poor to pay protection money to the pirates.

In the 1780s, Great Britain and France were almost the only nations that recognized the new nation from the New World. The former had been the United States mother country and enemy but it had always furiously competed with America over trade. France had been America's enemy and later great ally.

From 1796 on, these two great economic competitor nations responsible for the creation of the United States, then at war again, seized America's ships and sailors to meet their respective wartime needs. Thousands of seamen appealed to the federal government for help in obtaining release as American citizens after their capture and confinement in British and French prisons and ships.

This book is no dry tome but a nonfiction, engrossing, relevant tale based in serious scholarship. The disdain for the new United States would ultimately result in revolutionary new citizenship registration, a phony war with Great Britain, a trade embargo, and a real war with Great Britain. Perl-Rosenthal includes admiralty courts, prisons, sea battles, smugglers, and ship building in his narrative.

In defiance of orders to the contrary from the Secretary of the Treasury, the customs officials even registered the black sailors for protection. Eventually, they made up 17.7% of the more than 100,000 seaman's certifications. The United States thus became the first nation, or one of the first nations, that recognized as citizens its population of African descent. African Americans and original native peoples were always a significant part of America's merchant marine.

Much more could and scholars will write on such issues as the related Alien and Sedition Act that brought down one president, elected another, and involved the infamous scandal of President Jefferson's relationship with a slave woman. These citizen issues also led to the United States registering all enemy civilians during the War of 1812.