Citizen Mitten: My life with a cat my family says was as nutty as me 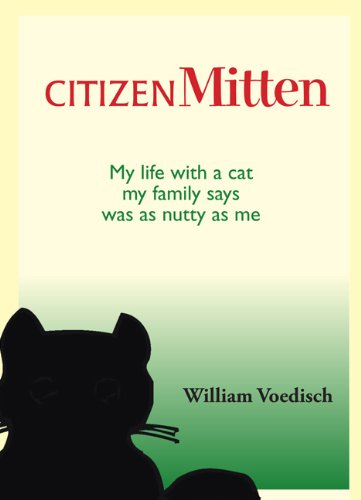 Pets make an indelible impression on the lives of their owners. Their antics and quirks become part of family lore.

In Citizen Mitten, William Voedisch regales the reader with tales of his “cat of a lifetime.” In describing how Mitten wrapped his furry paws around his heart, Voedisch’s narrative voice is extremely engaging. It is tender yet jocular, sentimental but down-to-earth. While getting to know Mitten, the reader simultaneously comes to admire the man who describes his utter devotion to this particular feline. Mitten stalks through the pages purring along the way.

Adopted as a stray, he came to view Voedisch as his mother by nursing on his ear lobes. From investigating a dusty air duct to hunting a fish right into a freezer, Mitten had a talent for getting into mischief. He was a loud talker with his half-purr/half-meow and was the “grumpy” star of the family Christmas card. His very name became a family anthem.

“The MITT part was high-up, almost a gravel-voiced yell, which would tail off to the more subdued -en. It became a sort of house cheer or whatever. Finally, and this is where you will think we’ve slid off the summit a bit, it’s nearly eight years after his passing and we still walk around the house and yell MITT-en for absolutely no reason whatsoever. Mitten at eight pounds had a scrawny coat, a feature not suited for Minnesota winters. Although he loved the outdoors, he just couldn’t take the cold weather. Winter was a real challenge for him. He wanted to go out, but couldn’t, at least not for more than a minute or two. Thus, you would often hear me . . . say something like the following to ‘Mittie,’ who was half out the door but was stopped in his tracks by the cold: ‘In or out, young man?’”

He was also a living alarm clock. When Voedisch failed to wake at Mitten’s self-appointed breakfast time, Mitten would race across the bed at top speed or cause a racket with a nearby newspaper. One time, he jumped from the headboard onto the stomach of an unsuspecting Voedisch. He was the master of rude awakenings.

Citizen Mitten excels when Voedisch addresses the painful subject of the death of a pet. As the owner of several cats, dogs and horses, he stresses the importance of letting a pet die with dignity. When Mitten could no longer eat due to old age, he was euthanized at the vet’s office. “In the end he was telling us it was time, getting weaker and weaker . . . [he] could not walk or even stand . . . [there was] no particular diagnosis, except old age. It was really amazing how peaceful the whole thing was. There were tears, of course, but no hard sobbing. It’s as though it all happened just as it should. A good death, death with dignity, is what a pet deserves as its days become numbered.”

Mitten died with dignity. The book concludes with a beautiful unattributed passage entitled “The Rainbow Bridge.” It describes a utopian place between heaven and earth where deceased pets await the passing of their owners. They are joyously reunited, never again to be separated.

A highlight is a centerfold of over 20 full-color pages of Voedisch family photos. Mitten is shown inspecting a catch of fish, on the patio wanting to come in from the cold, curled up on a bed with his signature grumpy face, and digging through a garbage can. The book’s interior is clearly laid out with a cat silhouette adorning each chapter heading along with a quote summing up each installment.

There are over 30 brief chapters in just over 150 pages. Appropriately, the collection begins with a note from Mitten to the reader along with a foreword by his vet who provided Mitten with the nickname “The Relic.” Overall, anyone who loves animals will form an instant bond with Voedisch as he talks about his cat of a lifetime.