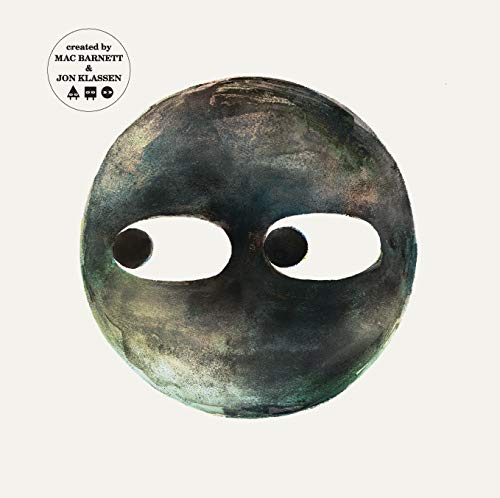 “Offer[s] young readers plenty of opportunity to read their own ideas into the story, flex their imagination, and explore their own fear of the unfamiliar.”

This third book in Barnett’s and Klassen’s Shape Trilogy follows the form of the earlier two entries: deceptively minimalistic text and drawings telling a tale with unexpected depth and humor. The story is simplicity itself: Circle invites her friends, Square and Triangle, to play hide and seek at her waterfall. The only rule? No hiding behind the waterfall, because it’s dark. “I’m not afraid of the dark,” says Triangle, with recognizable kid bravado.

When Circle closes her eyes, counts to ten, and opens them, Square is standing there with a message: “Triangle went behind the waterfall.” Even though Square is only a shape with eyes, his attitude echoes that of tattletales everywhere.

Worried for her friend, Circle ventures behind the waterfall into the dark, searching for Triangle. On successive spreads, the cave darkens until the page is entirely black, with only white eyes visible. Circle chides, and then apologizes to another set of eyes she assumes is Triangle. But it turns out Triangle is actually behind her. Who’s the new character? No answer from the other set of eyes.

With a scream, Triangle and Circle run back outside to join their friend, Square. Triangle says, “Now I am afraid of the dark.” But the open-minded Circle says, “You know, that shape in the dark might not have been bad. It might have been a good shape. We just could not see it.”

Barnett closes the tale by inviting the reader to imagine which shape waits in the dark cave. This refreshing take on an evergreen picture book theme, fear of the dark, manages to convey reassurance in its own understated, lightly humorous way. And Klassen’s gorgeous art—mostly black and white, and often set off by copious white space—provides the perfect complement to the text. Both offer young readers plenty of opportunity to read their own ideas into the story, flex their imagination, and explore their own fear of the unfamiliar.