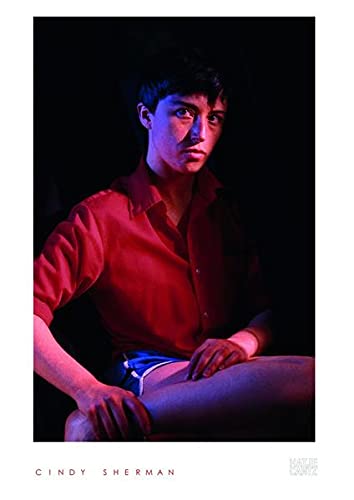 Cindy Sherman is a unique artist whose photography distinguishes itself by her presence both in front of and behind the camera, as photographer and model, director and actor. She conceptualizes and stages her scenes as a drama of one, the play-acting of a single actor performing to a universal audience. Although she transforms herself through elaborate makeup and prostheses into different personas, Sherman’s presentation centers around lighting and costume, which are critical to revealing her character’s story.

Her “portraits” are not self-portraits because they are not portrayals that reveal the “real” Cindy Sherman. Neither are they traditional portraits, but more akin to visual storytelling in a single image. The characters Sherman presents are reflections of society’s stereotypes that intrigue us into questioning what are they about, and what we can deduce from their expressions or clothing. Their costumes may be drab or extravagant, but they are always designed to tell us a story.

Cindy Sherman's photographic work in the 1980s in New York City showed her self-confident as a woman presenting herself as the supreme actress of her own dramas. It was unheard of in the 1980s in the world of photography. Sherman literally stood out. In the world of cinema the one actor/creator with comparable confidence who stood both in front of and behind the camera is Orson Welles.

Also impressive is her evocation of cinematic storytelling and her ability to personify so many different characters.

Sherman’s work has evolved. In her Untitled Film Stills series, the character’s introspection evokes hints of existentialism at play that make you question the character's place in the world and their frame of mind. In recent years her series of Fairy Tales, Disasters, History Portraits, Horror Masks, and others have explored the dysfunctional, repugnant, and grotesque, increasingly removing the viewer from the storytelling of a character’s inner motivation, and shifting the viewer to extrapolate what a character does from the external perception of their looks, rather than what they think.

Sherman does not name her images.  As “untitled” images with a number she lays the burden of interpretation upon the viewer. She keeps the focus on the image and what we can deduce entirely from visual information.

The book published by Hatje Cantz is part of a recent exhibition and is very informative by including several essays: “Force of Circumstance—Ambiguity, Horror, Aging” by art critic Gabriele Schor; “Cindy Sherman, Woman as Image: The Artist Is Present?” by professor Barbara Vinken; and “Encountering Cindy Sherman” by Ingvild Goetz, an avid collector of Sherman’s work who also owns the largest private collection of contemporary art in Germany. The book also includes a revealing interview titled, “A Conversation with Cindy Sherman” by Karsten Löckemann, in which Sherman talks about what motivated her to enter the world of fine art photography and her methods.

The Cindy Sherman book, which is beautifully bound and nicely printed with many full-page color reproductions of Sherman’s photographs, covers most of her career but is more representative of her latter work. The reader might feel somewhat shortchanged by the treatment of the four-to-a-page small duotone images 1976–2000, Untitled #378–394 (Murder Mystery) series, and the early 1976–2000, Untitled #363–377 (Bus Riders) series.

The inelegant layout and overly large type styling does nothing to enhance the aesthetics of the book, and as such it is perhaps designed to complement the starkness of the photos. After nearly 40 years Cindy Sherman continues to be a fascinating creative force in the world of photographic fine arts. This modest-sized book (9.75 x 6.9 inches, 184 pages) is an attempt at a comprehensive overview of her work.