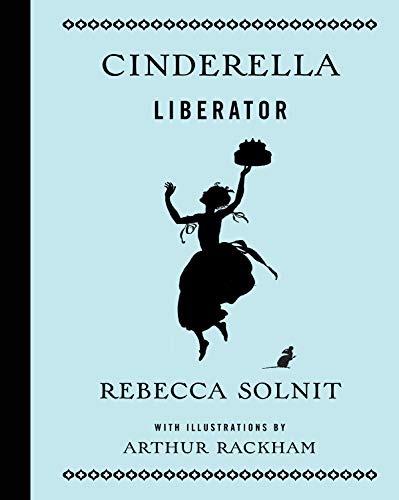 “This is a book likely to age well. It’s genuine, charming, and confident in its presentation of independent girlhood.”

Parents routinely revise fairy tales to fit their children’s wishes and their own beliefs. Adjustments are made, characters added or removed, and occasionally parents (or Disney) attempt to “empower” a princess, making her plucky and determined as well as beautiful and virtuous. Rebecca Solnit’s revision of Cinderella goes far beyond these attempts, and produces a better, more vivid story in the process.

Rather pleasingly, Solnit doesn’t dredge up and wallow in pre-Disney unsanitized violence, either. Torture and murder may belong in fairy tale origins, and Angela Carter gifted the genre with a torrent of feminist blood, but those aren’t stories you can read to children.

Solnit instead considers what kind of a story she wants for her great-niece, Ella. For the girl at the core of the fairy tale audience, she makes a story that revolves around women and girls. Solnit’s research leads her to folk tales focused on mothers and daughters, rather than to the class narratives of Charles Perrault. She doesn’t resist pop culture, either: “Cinderella Liberator . . . carries hints of Katniss Everdeen and Imperator Furiosa and the women of Hong Kong action films like House of the Flying Daggers and The Heroic Trio, those women who seize control of the means of production and destruction and move through the world like lionesses.”

Cinderella Liberator’s politics are open, but then, so are the politics of the original Cinderella, which reminds us that “virtue and beauty and upper-class status are more or less the same thing.” Solnit never pretends that children don’t understand power politics. Rather, she acknowledges that children have profound senses of fairness and justice, and that they are deeply curious about why people behave the way they do.

The stepmother’s cruelty is rooted in her worldview: “even though there was plenty for everyone, and plenty of people to do the work, her stepmother believed that there was not enough for everyone. And she wanted lots for her own two daughters.” Those daughters are less wicked than they are trapped by the strictures of femininity. The absurdity of the beauty myth plays out clearly in one sister’s reasoning: “She said that, surely, having the tallest hair in the world would make you the most beautiful woman, and being the most beautiful would make you the happiest.”

Solnit goes farther, dismantling beauty as a measure of female value: “there isn’t actually a most beautiful person in the world, because there are so many kinds of beauty. . . . Well, there are a lot of people with a lot of ideas about beauty. And love. When you love someone a lot, they just look like love.”

Cinderella isn’t the most beautiful girl, because there is no most beautiful girl. Cinderella Liberator abandons ideas of “best” in favor of compassion and joy. Cinderella’s virtue is reflected in her delight in cooking (a distinguished skill, and the eventual foundation for her small business) and her care for the vulnerable around her.

As the fairy godmother transforms animals into Cinderella’s entourage, Cinderella wonders, “Did the lizards want to be footwomen?” (All of the animals are female, because, why not?) The godmother confirms their consent: “For tonight . . . they are here to help you, because you have always been kind to the mice and the rats . . . and you have always smiled and said hello to the lizards.” The animals don’t belong to her, but they’re more than willing to help out for a few hours, to bring a friend some pleasure.

This pattern of reciprocal help drives the story. Cinderella’s path is not to marriage with a prince, but to friendship with a boy uncomfortable in his restrictive role, who “was sad he had frightened his guest and she had lost her shoe.” Cinderella Liberator’s world doesn’t revolve around the ascension of one hyper-successful girl. Rather, it allows each character to find a safe, comfortable, productive, and helpful social role.

The book is illustrated with silhouette artwork that Arthur Rackham created for a 1919 version of Cinderella. The images are expressive and quirky and resist the kinds of details (skin tone, particularly) that might resist Solnit’s movement to more universal representation.

Most admirably, Solnit has created a fairy tale that reframes its politics in favor of equality and freedom without simply preaching. The elements of the fairy tale that a child is likely to demand (clothes, transformation, glass slippers, a fairy godmother) are still present. Other elements that a child might fret at, like the fate of Cinderella’s mother (a ship’s captain away on a long voyage) are likewise accounted for. This is a book likely to age well. It’s genuine, charming, and confident in its presentation of independent girlhood.