The Ciao Bella Book of Gelato and Sorbetto: Bold, Fresh Flavors to Make at Home 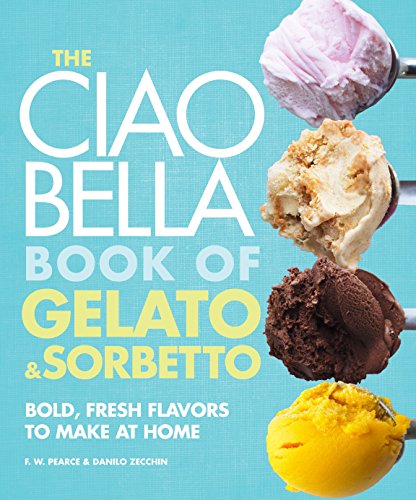 Can a cook’s shelves hold too many ice cream books? Not with summer looming, and not if there’s still space for The Ciao Bella Book.

Fans of Ciao Bella, which sells gelato and sorbetto in groceries across the county and has shops in California and Manhattan, will find about 100 recipes here based on those offerings. Although they’re not quite as quick as whisking together cream and sugar, the recipes keep things lazy-summer simple.

A cook needs just a saucepan, a thermometer, and an ice-cream maker for most of the recipes, and cooks with experience in making a custard sauce could skip the thermometer. Although the authors note that an expensive machine with built-in refrigeration allows multiple batches to be made in a day, they reassure readers that inexpensive makers with canisters that must be kept frozen will still produce terrific desserts.

The book offers two base recipes for gelato, which differs from ice cream by using more milk and less cream, and by having less air churned into it. For plain and chocolate bases, a cook makes a custard by whisking hot milk and cream into egg yolks beaten with sugar, then heating the mixture until it thickens slightly. Readers will have to plan ahead a bit, to chill the custard for at least 4 hours (overnight is better, especially for the canister makers) before churning.

The base recipes each make a tasty quart of gelato on their own, but then the variations begin. Some require further cooking, such as one that combines rice pudding with gelato, a luxurious combination. Most, though, need just a few mix-ins, such as extracts, chopped chocolate, and nuts.

The stracciatella method of drizzling in melted chocolate to a plain base (barely scented with vanilla; I wished for a bit more, just as readers accustomed to American excess will wish for more chocolate) makes an easy, delicate chocolate-chip gelato. Although the suggestion of drizzling in the chocolate just as the gelato finishes churning seems easier, follow the recipe’s preferred method of folding it in by hand for a more even result. (Pet peeve alert: The recipe calls for folding with a rubber spatula. The accompanying photo shows a metal spoon. Yes, it’s minor, but if the point of a photo is to demo the recipe, why doesn’t it follow the recipe?)

Cinnamon gelato, using the plain base plus cinnamon and a touch of vanilla, came out full of flavor on its own; variations include a ribbon of caramel swirled in or crumbled oatmeal cookies added at the end of churning. Mint chip gelato was also a hit, although it was too mild with just ½ teaspoon peppermint extract; the authors suggest increasing to ¾ teaspoon, and mint lovers will want even more than that. The recipe’s ¼ cup of chopped chocolate also seemed a bit scanty; ½ cup made tasters happier.

Mixing the plain or chocolate base with peanut butter yields a very kid-friendly, sweet gelato, made even better with a swirl of strawberry jam. Calling for “sweetened smooth peanut butter” may confuse some readers; presumably it means Jif or Skippy or something similar, not “natural” peanut butter. The recipe was tested with regular Jif; note that reduced-fat peanut butters, which have even more sugar, would make this gelato far too sweet.

Because the recipes are so simple, cooks will soon feel free to experiment on their own; try crossing the peanut butter-plain base gelato with the stracciatella gelato’s method of drizzling in melted chocolate, or substitute the peanut butter-chocolate version in the book’s recipe for a s’mores gelato.

While most of the recipes are fairly tame (despite the assertion that the lower fat content makes gelato more intense than ice cream, many of the flavors here are quite mild), the book does offer some more adventuresome ideas. Gelati with black sesame seeds, ginger, green tea, saffron, or chai prove interesting but not bizarre, and an “adults only” section will get cooks started on liqueur experiments.

Some of the more intense flavors in the book come from the sorbetto recipes. A sorbetto, made from a simple syrup (water simmered with sugar) and, usually, fruit, will be perfect for the fat-phobic, but it’s more than a diet dessert. Its depth of color—from raspberries, strawberries, mangoes, watermelon—foretells the flavor to follow. And sorbetto doesn’t have to be fruity; try the chocolate, made in a flash by melting dark chocolate in the sugar syrup, adding cocoa and a smidgen of rum and vanilla, then chilling overnight—good enough to explain a bowlful out of the churn at 9 A.M.

The book ends with a few suggestions for getting fancy, including gelato “truffles” and gelato cakes and sandwiches, all of which provide inspiration for experimentation. But the focus isn’t on tarted-up desserts, just recipes with a straight shot to summer happiness—just in time.