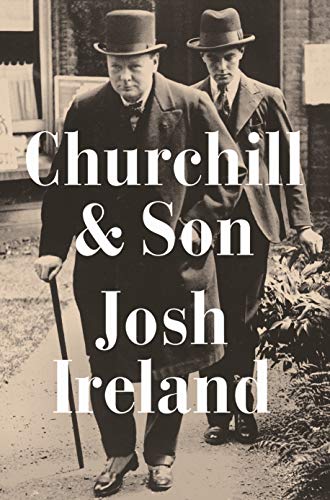 “Churchill & Son is a well-written, extensively researched book that explores the interesting but troubled relationship between a world-famous father and son.”

Winston Churchill wanted to be a great man, and he was. He also wanted his son Randolph to be a great man—Randolph was not. Randolph Churchill was rude, self-absorbed, frequently drunk, a notorious womanizer, a compulsive gambler, and often callously indifferent to the feelings of others (including members of his own family). John Coleville, Winston’s wartime personal secretary, called Randolph “one of the most objectionable people I had ever met.” Many of Winston’s other friends and colleagues agreed.

Josh Ireland in his new book Churchill & Son lays most of the blame for Randolph’s behavior on Winston. “Randolph,” he writes, “was trapped in a cage built by his father.” “Randolph was shaped,” Ireland continues, “by his father’s affection, humor, courage, and generosity. He was also damaged by his egotism, his ruthlessness, his obsession with his own destiny and desires, and the strange fact that [Winston] could be so completely oblivious to what was going on in anybody’s mind but his own.” Winston “built and broke his son.” Here and throughout the book, Ireland too often slips into amateur psychology.

Ireland begins the book with a chapter on Winston’s distant relationships to his own father and mother. Lord Randolph Churchill (Winston’s father) and his wife Jennie had very little time for young Winston, who was reared mostly by his nanny Elizabeth Everest.

Winston Churchill was a much better father to his children, including his son, than Lord Randolph was to him. Indeed, Ireland writes that Winston “adored being a father.” But all of the Churchill children learned that Winston and Winston’s political career always came first—including with their mother.

And what a career it was: President of the Board of Trade at the age of 34; Home Secretary at age 36; First Lord of the Admiralty before and in the early years of the First World War; Minister of Munitions and Secretary of State for War in the late stages of the First World War and a few years after the war; Colonial Secretary and Chancellor of the Exchequer in the mid-to-late 1920s; Prime Minister and Defense Minister during most of the Second World War; and again Prime Minister in the early-to-mid 1950s.

Throughout his years in office and out of office, Winston Churchill also authored voluminous books on history and biography, wrote newspaper articles, and gave memorable speeches on both domestic politics and world affairs.

Living in the shadow of such a great man, as Randolph did, can be difficult, but it didn’t have to lead to a life full of debauchery, drunkenness, womanizing, indebtedness, and objectionable behavior. Ireland obviously doesn’t see it this way. “Randolph,” he writes, “was glorious in his own way:  a giver and devourer of pleasure, the kind of man who exploded into rooms, trailing whiskey tumblers and mischief.” What is so glorious about that?

It is true, as Ireland notes, that Winston would invariably forgive his son for his many indiscretions and disreputable behavior. Winston was much more forgiving in this respect than Randolph’s mother, and this led to heated arguments between Winston and his wife. Ireland notes that Randolph later told people that his mother hated him. It is more accurate to say that she was far less tolerant of Randolph’s behavior than was Winston.

Randolph, for all his arguments with Winston and his misbehavior, was always loyal to his father in politics. When he became a journalist, Randolph vigorously—sometimes too vigorously for Winston’s taste—attacked his father’s political enemies. He invariably sided with his father on the political issues of the day—whether it was India, British rearmament, or the growing Nazi threat.

When Winston was out of office in the 1930s—during his “wilderness” years—he and Randolph spent a lot of time together. Winston talked of Randolph succeeding him as a part of the Churchill political “dynasty,” hinting that his own political career might be ending. But as Ireland notes, Winston had no real intention of ending his political career. He believed it was his destiny to lead Great Britain in a great struggle—that took priority over Randolph’s political ambitions.

Randolph set out, therefore, to enter Parliament on his own. In his first few elections, he suffered defeats. He finally entered Parliament in October 1940, several months after his father had become Prime Minister.

Randolph also married Pamela Digby, who would soon carry on an affair with Averell Harriman, President Roosevelt’s special envoy to Great Britain (Randolph, needless to say, was not monogamous either). Randolph later accused Winston of accommodating, even encouraging, his wife’s infidelity to help gain American support for the war.

During the war, Randolph donned the uniform and saw action in the North African desert and in Yugoslavia (where he met communist rebel leader Josip Broz Tito). In Yugoslavia, he served alongside his friend novelist Evelyn Waugh. Winston kept tabs on his son and frequently arranged for Randolph to come home and provide war intelligence to him.

When the war ended and Winston fell from power due to Labor’s landslide victory in the Parliamentary elections of 1945, Randolph, though he lost his seat in Parliament, thought that perhaps this would be his moment to continue the Churchill political dynasty. But, as in the 1930s, Winston, though depressed about his party’s defeat, had no intention of quitting politics. And several years later at the age of 77, Winston was again Prime Minister. He clung to power until ill health and old age forced him to retire in April 1955.

Meanwhile, Randolph continued to drink, gamble, and gain weight. Ireland notes that he “staggered around London, littering his path with gratuitous insults. He ruined parties, gate-crashed private dinners, immolated friendships . . .” Ireland writes that Randolph found some semblance of peace when he bought his own home and fell in love with the wife of a naval officer.

Winston, however, never fully gave up on Randolph, and he asked his son to write his authorized biography. Randolph was thrilled. He threw himself into writing what he referred to as the “great work.” He decided that the biography would consist of multiple volumes of narrative and companion volumes of documents. He assembled documents, Ireland notes, from Chartwell (Churchill’s former home), Blenheim Palace, the Royal Archives, the Admiralty, the Home Office, and the official papers of other British statesmen.

Randolph, with the help of a team of research assistants, wrote the first two volumes. But he never finished the “great work.” His health deteriorated. He suffered a heart attack and had cirrhosis of the liver. He died in 1968 at age 56, only three years after Winston died. Martin Gilbert, one of Randolph’s research assistants, would complete the eight-volume biography of Winston. The companion volumes are still being compiled and published under the direction of Dr. Larry Arn of Hillsdale College.

Churchill & Son is a well-written, extensively researched book that explores the interesting but troubled relationship between a world-famous father and his son. But its attempt to shift blame for Randolph’s behavior to his father is flawed. Randolph Churchill made his own choices throughout his adult life—mostly bad ones. And just as a son cannot be blamed for the sins of his father, Winston Churchill should not be blamed for the sins of his son.