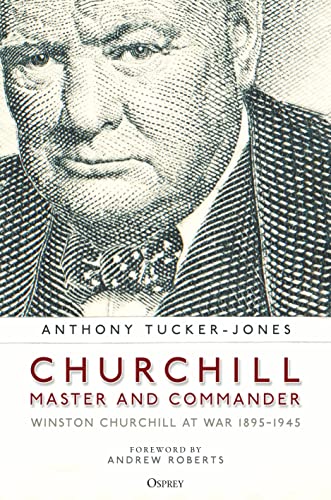 “There can never be too many books about Winston Churchill. His life and career were so important, controversial, and consequential that books about them are endlessly interesting.”

There can never be too many books about Winston Churchill. His life and career were so important, controversial, and consequential that books about them are endlessly interesting. Anthony Tucker-Jones, a former intelligence officer and prolific military historian, has written a new book about an old and frequently analyzed aspect of Churchill’s career: Churchill at war.

Tucker-Jones in the introductory note to Churchill, Master and Commander’s bibliography states the obvious: Books about Churchill are legion and books about Churchill and World War II are “seemingly inexhaustible.” It is a lengthy bibliography, but two previous books stand out—Carlo D’Este’s Warlord and Andrew Roberts’ Masters and Commanders. Tucker-Jones in this new book covers the same ground as those two works, but he adds interesting independent analysis and critical perspective to Churchill’s military adventures and political command.

Churchill initially seemed destined for a military career—he was educated at Sandhurst Military Academy and saw action as both a combatant and a war correspondent in Cuba, the North-West Frontier, Sudan, South Africa, and later briefly on the Western Front in World War I. But like his father, Churchill sought a political career, and he used his military experiences—especially his daring escape from the Boers in South Africa—to launch a political career that ultimately took him to the summit of British politics.

Tucker-Jones agrees with Churchill’s many biographers that war excited Churchill, energized him, even as its destruction and loss of life brought him to tears on many occasions (especially during the Blitz). But war also hardened Churchill to its most difficult, painful, and atrocious aspects: he sacked commanders who failed to produce victories; he repeatedly supported the use of poison gas against Britain’s enemies; and he authorized the terror bombing of German cities in World War II, though not without moral qualms.

His career at war, as Tucker-Jones and others have noted, mixed successes with many failures. In World War I as First Lord of the Admiralty, he championed the Dardanelles debacle. During the Second World War, again as First Lord of the Admiralty, his Norwegian campaign resulted in failure that ironically led to him being named Prime Minister. Throughout the Second World War, he proposed military moves (in Greece, the Balkans, the Aegean Sea) that either failed or were forestalled by strong opposition from his military chiefs.

But Tucker-Jones shows that Churchill more often than not got the big things right. At the start of the First World War, Churchill had the British Navy ready to transport troops to the continent and to impose a blockade on the Central Powers. At the end of the First World War, Churchill sought to persuade the government to strangle Bolshevism in its Russian cradle and thereby prevent more than a century of misery and danger caused by communist regimes throughout the world.

During his “wilderness” years out of power in the 1930s, Churchill urged rearmament and warned about the growing Nazi danger. During the Second World War, he pursued an alliance with the United States and Soviet Russia to save Britain.

Churchill was “master and commander” in World War II because he was both Prime Minister and Minister of Defense. As Tucker-Jones notes, this placed Churchill “directly above the Chiefs of Staff,” and gave him “personal control of the war.” He received intelligence briefings daily. Churchill ensured, writes Tucker-Jones, “that he had personal access to raw incoming intelligence.” Churchill bureaucratically positioned himself to have, as he noted in his memoirs, “the authority to give directions over the whole scene.”

The “whole scene” included not only the war fronts in Europe, Africa, South Asia, and the high seas, but also imperial crises in Ireland and India. Churchill famously said that he did not become the king’s first minister to preside over the dissolution of the British Empire, but that is precisely what happened.

Churchill’s role as master and commander in World War II, however, faded when the United States became the senior partner in the Anglo-American alliance. And as the war progressed, the United States and Soviet Union had a greater say than Britain in war strategy and in planning for a postwar world. The survival of the British Empire was not in the postwar visions of Roosevelt or Stalin. And Churchill’s role as master and commander was not in the postwar vision of the British people, who, tired and weary of war, voted for the Socialists who promised to alleviate the burdens of the previous five years.

Tucker-Jones concludes the book with Churchill, defeated at the polls, vacationing in the south of France and painting to “recover my balance.” Churchill reportedly remarked to his physician Lord Moran, “I’m damned glad to be out of it.” Yet, as Tucker-Jones writes, “War . . . was never far from his mind.” Night after night, Churchill’s daughter Sarah recalled, her father regaled his family and guests with tales from Cuba, India, Africa, and the two great wars he helped wage on Britain’s behalf.