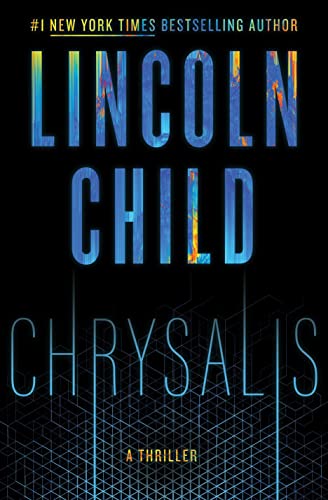 “Fans of this series will enjoy the extended romp with Logan and his demands for revelation; newcomers can relax into Lincoln Child’s lively narrative.”

It’s not unusual for crime suspense to incorporate cutting-edge technology—from DNA to facial recognition to global databases, many a novel has hung its plot on a radical change that hasn’t quite come into real use. In Chrysalis, the sixth Jeremy Logan thriller, Lincoln Child pushes this cutting edge into a whole new dimension, as he spins together media, medicine, and moguls. Buckle in, because the warp speed of this ticking-clock plot gives no relaxing interludes.

Jeremy Logan isn’t a conventional crime solver. He’s an enigmalogist, a nearly psychic investigator of inexplicable phenomena. His ability to make unexpected connections in data, including among human motivations, makes him particularly valuable.

So when Chrysalis, a technology and advanced science company embedded in its own city-like compound in western New England, falls victim to a blackmailer and significant individuals among the company’s projects suddenly die, the pressure’s on Jeremy to move swiftly. Even aided by Chrysalis’s own outstanding virtual reality, it doesn’t look like he’ll be able to outmaneuver the demand for a billion dollars in cryptocurrency. Because if the blackmailer’s not paid, thousands more lives and the company’s entire future are at stake.

But payment alone couldn’t persuade Logan to immerse himself and risk his life on such a mission. It’s who’s asking him—a living phantom of entrepreneurship, John Christie IV himself, who tells Logan, “The work being done here is precious. It’s the future of technology—the future of man. We have our own people looking into this tragedy, but the time element is critical. . . . You’re the only person in the world I felt comfortable contacting. You’re our Hail Mary, Jeremy. You’re our just in case.”

The pressure to solve both the technical and the human forces arrayed against the company is enormous, and Child maintains the race against time for all of Logan’s efforts. That said, there’s little room for character development, and as the mechanics of the threat are gradually unraveled, they lead to a shorter fuse and more compressed action. Perhaps it’s not a surprise that the ending falls a bit flat—nobody’s sacrificed anything of value (other than a couple of quickly ended lives) and there’s no growth or deep resolution that will light up a reader’s energies afterward. Yet Child is adept at tying together all his threads by the finale, with a neat and not expected solution.

Watch for quirky scraps of humor, like the moment when the “Alexa” figure in the programming absorbs Jeremy Logan’s orders quickly so he can take action. As he rises, he tells the voice of the software, “Grace, you’re a peach.” Her reply: “No, Jeremy. I am a virtual assistant.”

Fans of this series will enjoy the extended romp with Logan and his demands for revelation; newcomers can relax into Lincoln Child’s lively narrative and marvel at how a little stretch of current technology can create a scary world of possibilities.