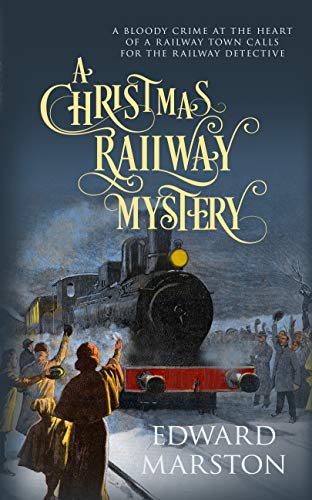 “an entertaining escape that showcases the virtues of logical thinking, along with a toe dip into a bygone industrial age.”

In the realm of cozy mysteries, it seems there’s something for everyone—a thought brought to mind by this historical series about steam trains. The most recent volume is a holiday episode, wherein “the Railway Detective,” Inspector Colbeck, is called out in December to a gruesome murder at a locomotive works, and is pressured to solve it and be home in time for Christmas.

Set in 1860s England, the mystery takes readers around the countryside by train as the inspector and his sidekick, Sergeant Leeming, investigate the decapitation of a much-unloved railroad worker amid a surplus of suspects and conflicting evidence.

Soon they are embroiled in a second investigation: the abduction of their boss, Superintendent Tallis, while he’s off-duty to attend a reunion of his old wartime regiment. For this crime, there are hardly any suspects or evidence at all.

In both cases they are impeded by the ambitious Inspector Grosvenor, an egotist intent on getting revenge against the Railway Detective (who always outshines him) and attaining promotion (which Tallis’s disappearance makes possible). Like Colbeck and Leeming and all the characters in the novel, Grosvenor is engaging but only one step beyond being a cardboard cutout.

The story is not about deep character exploration, however. It’s about plot and milieu, and designed to appeal to both train enthusiasts and puzzle solvers. Even the main characters represent the difference, as observed by Sergeant Leeming: “Since he didn’t share Colbeck’s passion for watching steam locomotives, carriages and wagons being constructed, he simply found the Railway Village dirty, noisy and depressing. He was, therefore, delighted when he was told they’d be going back to London that evening.”

Puzzle-solving enthusiasts get the better deal than train enthusiasts in this novel. The plot offers twist after turn after twist, with the narrative jumping between multiple viewpoints and chasing enough red herrings to make one’s head spin; meanwhile, the railway arcana is simplified and mostly background.

Historically, the book captures something of the era, in the daily details of getting around; the clothing and external environments; and the ingrained sexism and classism of English society during the period. It also shows the freedoms and constraints of vintage detecting.

Modern readers aware of today’s high-tech forensics and liberty-protecting laws might be surprised, even appalled, by how little police forces had to work with back then and the conclusions they leaped to. The whole idea of justifying an arrest based on evidence seems like a fairly new concept to the story characters, clashing with the time-honored technique of taking a man at his word and apologizing for any challenge to his honor.

The Railway Detective neatly balances these contradictory elements without compromising his own honor. His brilliant deductions and affable arrogance may remind one of Sherlock Holmes.

The combination of characters, place, and time gives readers get an entertaining escape that showcases the virtues of logical thinking, along with a toe dip into a bygone industrial age. The whole makes a cozy, light read suitable for winter evenings, especially around Christmas.