A Christmas Garland: A Novel 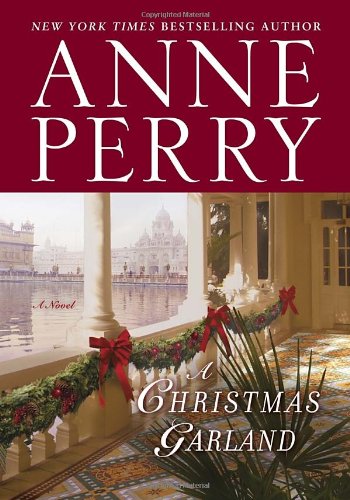 “Babe Ruth didn’t hit a home run every game.” Anne Perry’s Christmas novellas are treats for her fans, starved for more Victorian suspense from the master. They provide a chance for her to feature a supporting character from her two main detective novels and turn him into a star of his own book.

In the past we’ve read about 13-year-old Gracie Phipps (who becomes the Pitt’s housemaid), Superintendent Runcorn (who becomes the bane of Monk’s existence), Pitts’ mother-in-law Caroline and her scandalous new marriage to (gasp and shock) an actor!

It’s a clever way of giving the voracious reader some insight into why even her minor characters act as they do, invariably becoming hero in these Christmas stories. A chance for readers to realize these characters may have had lives, even eventful lives, before they become involved with her detectives.

This time it’s 1857 with India in the midst of rebellion. Young Lieutenant Victor Narraway (who readers know becomes Pitt’s boss) is not encouraged to try very hard to defend John Tallis, a young medical orderly accused of helping an Indian prisoner kill a guard and then escape. The prisoner gives his countrymen information that results in a bloodbath for the English- the Siege of Cawnpore. Cries for revenge from the soldiers who mopped up the blood may be overwhelming, but the British are not animals—they will have a trial to prove John Tallis is guilty.

Tallis is arrested as an accomplice simply because he was the only soldier unaccounted for when the crimes were committed. He claims to have been checking supplies, but no one saw him. Also he doesn’t seem to have a motive. How can Narraway prove a negative? Tallis fixes people up, and everyone praises him, from his superiors to his patients. Why did he go rogue?

Anne Perry ramps up the suspense in her usual brilliant fashion. Narraway is only given two days to prepare a defense. And it clearly has to wrap up before Christmas. Even if this year Christmas is celebrated in sand, not snow.

Ms. Perry’s courtroom scenes are usually old-fashioned nail biters. But in this novella, the answer is so clear the reader is reduced to yawns. Even the title garland explanation falls flat.

We know Babe Ruth didn’t hit a home run every game. Let’s hope Anne Perry comes off this disappointing outing swinging for the fences next time she’s up at bat.