Chosen: A Memoir of Stolen Boyhood 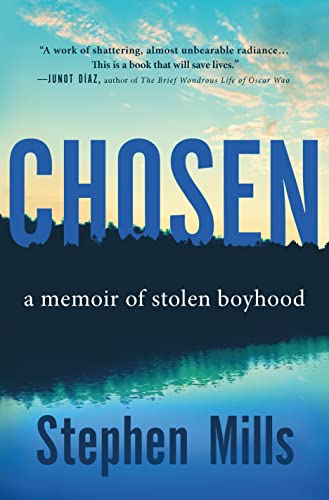 We’ve all encountered the stories of people who experienced childhood trauma, only to have it blight their later lives until a final reckoning. It’s a staple of films, memoirs and, increasingly, podcasts. Chosen: A Memoir of Stolen Boyhood is memorable in the genre because of the author’s wrenching honesty (both about his predator and about himself) and rich powers of recall and storytelling.

New Yorker Stephen Mills was, by his own omission, a fairly happy, albeit confused kid when he set out for a Jewish summer camp, New Milford, Connecticut’s Ella Fohs, in 1968. There was trauma at home, because his late father had come home from World War II with MS, and after his death his mother had remarried, though the problems seemed surmountable.

But according to the author the director of Camp Ella Fohs, Dan Farinella, was a sexual predator whose main target was vulnerable teenage boys. Farinella was by all accounts a very successful camp director, with a progressive viewpoint on racial matters. Exactly how he seduced Mills with special attention, travel, gifts, and restaurant visits (his mother got cannolis) is graphically spelled out in Chosen. The initial milk and cookies were soon replaced by pornographic magazines and stag films. The scenes are vivid: The author has photographic, novelistic recall of events decades in the past.

“Just make it to the morning,” Mills remembers thinking the first night. “Each time I opened my eyes, I was still in the small room with the large man in the metal bed next to me.”

Mills thought he was being singled out, but it turns out there were many other victims, not only at Ella Fohs but at the other institutions Farinella directed. The activity was blatant, carried out in bustling summer camps, but the predator continued unhindered and unreported for decades.

The reader is dismayed when, after seemingly experiencing revulsion and shame over the abuse, the author returns again and again to be victimized by Farinella. It went on for two years. Not only does Mills go back to Ella Fohs for another year, but he accompanied Farinella to the camp over winter break and went with him on a family vacation to the Bahamas.

“The last thing I wanted was to spend my vacation with Dan and his family,” Mills writes. “In my head, I was screaming no.” But he goes anyway, and the victimization continues. This pattern isn’t explained as well as it might be in the book. Farinella is charismatic, and showered his young marks with attention, but more insight into Mills’ thought processes at these critical junctures would be helpful.

Mills’ life spirals down. He is unable to sustain relationships or—despite having been a gifted scholar—concentrate on his studies. At his lowest point, Mills is living in an anarchic commune in Michigan and compulsively shoplifting. This is followed by a long, fairly harrowing sojourn in Asia. It takes quite a while—and lots of time with therapists—before Mills firmly connects his deterioration (compounded by physical symptoms) with Farinella and his stolen childhood. It takes a revelatory encounter with his late father’s papers, and one final visit with the predator before the path forward is clear: the demons had to be exorcised.

In the closing chapters, Mills embarks on an intense crusade to get Farinella prosecuted. These sections are shocking, because law enforcement and social services seem so powerless to act. Or indifferent. Mills gets the testimony of many other victims, but it’s all unavailing. Although he finally gets out of camping, Farinella is never prosecuted or publicly outed. He dies of cancer. Before the book’s publication, there’s still mostly praise online for the man and his time at the camps. Here’s one innocent online passage: “Danny let us enter his house (‘mansion’) whenever we wanted to. He said if there was food in the fridge, it was ours. Ella Fohs, what a great place.” That mansion, of course, was where Farinella brought his victims, over and over.

Mills, who finally straightened out his life, is plainly still haunted by what happened to him all those years ago. Although he files a civil suit, a reckoning for Farinella might have been cathartic.