Chopin's Piano: In Search of the Instrument that Transformed Music 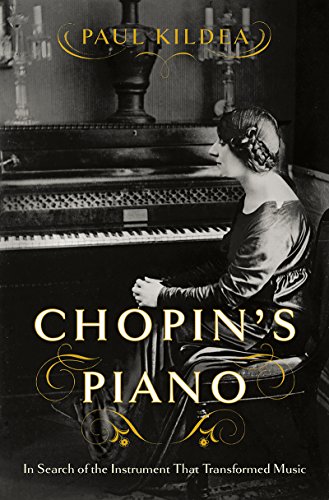 “Captivating and intriguing, Chopin’s Piano will most certainly entertain both novice and hardcore music historians.”

In November 1838, composer Frédéric Chopin, French novelist George Sand (Amantine Lucile Dupin), and her two children sailed to the Spanish Island of Majorca to escape the cold damp Parisian winter. They settled in an abandoned monastery at Valldemossa in the mountains above Palma where Chopin finished what would eventually be recognized as one of the great and revolutionary works of musical Romanticism: his 24 Preludes. There was scarcely a decent piano on the island, so Chopin worked on a small pianino made by a local craftsman, which remained in its monastic chamber for the next 70 years.

Chopin’s Piano: In Search of the Instrument That Transformed Music by Paul Kildea traces the history of Chopin’s compositions through the instruments on which they were written, the musical historians who interpreted them, and the traditions they have come to represent. Kildea is a composer, pianist and the author of Benjamin Britten: A Life in the Twentieth Century (2013, Penguin Global). He was formerly the head of music at the Aldeburgh Festival and artistic director of the Wigmore Hall in London.

Chopin’s Piano begins and ends with the Majorcan pianino, and is organized in two parts, the first examines Chopin's 24 Preludes; the studies the critical responses to this composition, the composer himself and the history of the diminutive piano on which it was written.

Most of the second portion concentrates on Wanda Landowska, a legendary harpsichordist, who in 1913 rescued Chopin’s pianino from its monastic cell. After she fled France for the United States in late 1941, all of her possessions—including rare music manuscripts and beloved instruments—were confiscated by the Nazis. Only a small portion of her possessions managed to survive the war and were eventually returned. The pianino would attain an astonishing level of cultural symbolism during the Second World War as a representation of Chopin and his music of which the Nazi regime was determined to use for propaganda and ideological purposes.

“The looting never seemed to stop. In the summer months of 1943 two freight trains containing 120 upright and several grand pianos left France for Germany . . . Some of the most notorious instances of plunder and redistribution of instruments . . . were carried out on behalf of the Reich’s Bruckner-Orchester, which was dreamed up by Hitler . . .”

While it is assumed that most readers are aware that the Nazi’s looted art, what isn’t as well known is the theft of other cultural symbols such as musical instruments. Kildea does an excellent job of tracing and attempting to solve the mysteries of what happened to one of these iconic symbols.

The author’s enthusiasm for the subject is very apparent and he expertly and effortlessly illustrates how Landowska’s trials and tribulations relates to Chopin’s, a saga which redefined portions of the cultural and political history of mid-20th century. Captivating and intriguing, Chopin’s Piano will most certainly entertain both novice and hardcore music historians.