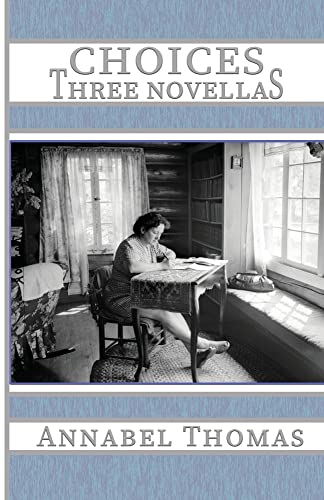 “Annabel Thomas has a gift for creating character and a clear eye for this conflict in all human relationships.”

The novella is a demanding form, requiring the heft of a novel and the precision of a short story. Annabel Thomas is well equipped for the task, having published two novels and won prestigious awards for her short stories.

Dorsey and the Amish Man, the first, and arguably most successful of the three novellas in Choices, is a love story complex enough for a novel. In her twenties, Dorsey is taking care of her dying father when she meets the young Amish farmer, Menno. Dorsey’s father, a writer, has moved them to rural Captina, Ohio, because of his memories of the farm where he spent his boyhood. “All life since has been dross,” her father says, which, of course, includes Dorsey and Iva, her mother, who left when Dorsey was eight.

Since the farm was also the locus of Dorsey’s happiest early memories, she is drawn to Menno and the Amish life shaped by the seasons and rituals like barn raisings and corn huskings. She longs for the simplicity of his dedication to the land and his people, but she has inherited the restlessness of The World, as Menno calls her father. She accepts her father’s many gods (mostly other writers about whom he writes a biographical series) rather than Menno’s one God. Menno, for his part, distrusts the outside world. An older brother left the Amish community only to commit suicide on his return. When Menno travels with Dorsey to Taos, to scatter her father’s ashes on D. H. Lawrence’s grave, both must make a choice.

The Lost Book, the second novella, has a tighter focus, alternating between two characters on a single day. Emory and Floris are an old married couple. Emory works as a plumber though they live on Floris’s rundown family farm. Floris is mourning the recent loss of her sister, Neva, a “no nonsense” woman with whom Floris had almost nothing in common, especially as Neva was an unbeliever while Floris is a devout Pentecostal.

On this particular day, Floris is obsessed with a missing library book, The Novel: A Modern Guide to Fifteen English Masterpieces. She is convinced it would have been a way to reach Neva. “The words of these writers weren’t overtly religious and so wouldn’t put Neva off. But listening to them she’d have to admit that caring between people was, as Floris believed, the gateway to God.”

Emory is facing a less tangible loss, the loss of libido. On this same day, Floris has persuaded him to attend a lecture by a famous urologist in a nearby town. While Floris scurries about searching for the book, Emory listens to the doctor discuss late life impotence and possible remedies, including the new miracle cure, Viagra. To Emory, this seems pointless. “I’m through with that foolishness”, he says—though he is sympathetic to Bugle, his old hound, who refuses to believe that he can no longer catch a rabbit. When Emory returns at the end of the day, he and Floris find themselves at odds, defeated and angry, until familiarity restores the old balance.

The last novella, Tuesday at the Airport is closest to the short story. Addie, middle aged and alone in the world, is trying to come to terms with the loss of her parents and their own loss of the rural Appalachia that they left for Tappan City, Ohio. In Tappan City, Addie’s father, a postal worker, spent all his free time working on a book on the history of the postal service, leaving Addie at the mercy of her unhappy mother. “Well,” Mama would say, “what WAS the point of life, Addie Mae?” The question haunts Addie. On this Tuesday, she has come to the airport to watch people, as though by watching and listening to strangers, she might find the answer. But this day happens also to be the day of the Challenger explosion which is played over and over on the airport TVs. A major disconcerting loss presented in an unfamiliar medium leaves Addie farther than ever from being able to see a point in the quests that carry people as far as outer space.

Each of these novellas presents a choice between the simple acceptance of the way things are and the desire, exacerbated by the modern world, for change and challenge. Annabel Thomas has a gift for creating character and a clear eye for this conflict in all human relationships.