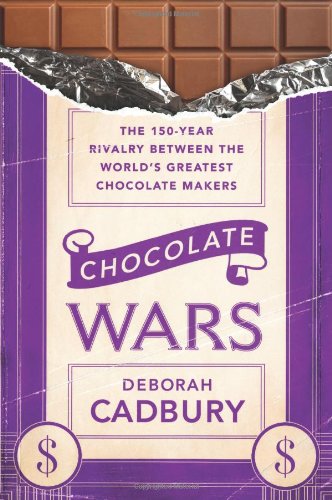 “Before you pop another truffle into your mouth. Before you buy another bag of baking chips. Before you grab a cheap candy bar at the checkout line, you need to read this book so you have a better grasp of the miracles and madness that have created chocolate.”

Ah, history! For some of us the subject is endlessly fascinating, but for most people it is just a bore made more intense by our increasingly computerized society with instance entertainment available 24/7. Corporate history must seem even more boring given that business can be confusing to laypersons. But what if you could combine history + the story of a corporation + something people actually love? Sounding better already?

Deborah Cadbury—yes, of that Cadbury family—has tried to make corporate history interesting by telling the story of one branch of her family whose name ranked among the greatest chocolate makers of all time. How popular is chocolate? It’s a $13+ billion annual business with big companies, private candy shops, and even pirates—all trying to get a piece of the delicious cake. As Chocolate Wars reveals, the industry has been this way for quite some time now.

From modest beginnings, the Cadburys tried to create a chocolate business that took care of the employees and made a profit. Their Quaker morality was constantly being challenged by the need to compete with other chocolate makers. Ms. Cadbury does an excellent job of taking us into 19th century Europe and giving us a tour of how fierce this competition was. We also get a peek at the introduction of amazing new technologies that we now take for granted in our neatly smooth candy bars or chocolatey chewy treats that don’t spoil and make us sick like they did back then.

As techniques improved in the processing of cacao, so too did the amount of land given over to the precious pod bearing trees, resulting in cheaper materials and thus more room for experimentation in production. A smoother, cheaper, more tasty chocolate product created at a time when governments were trying to increase the income of the average worker helped grow the popularity of chocolate in all its yummy forms. Sometimes chocolate makers worked with governments to give themselves an edge in the market with regulations that showcased one company’s wares over those of a rival. You think that companies don’t pay scientists and doctors to add their imprimatur to their publicity materials? Ms. Cadbury shows us how Quaker chocolatiers actually led the way in marketing.

Feel overwhelmed by commercials for candy—especially with Halloween, Christmas, Valentine’s Day, Easter . . . ? Advertising chocolate also began in the 19th century, and the Cadburys were on the cutting edge in terms of ads and flyers. Of course they were not alone; Europe provided its own arena where intense rivalry between chocolate manufacturers played out.

By the end of the 19th century, the other big player in this historical narrative is . . . ? One guess. You got it: Hershey. Taking advantage of his do-or-die attitude, his desire to use successful models from other businesses, and his understanding of the effectiveness of advertising on the growing American population, Hershey was able to build a chocolate empire within one lifetime. The Cadburys now had to look beyond Europe into their own backyard at the competition.

According to Ms. Cadbury, the 20th century revealed more of a change in ethics than in technology regarding the chocolate industry. New companies unburdened by the Quaker mentality rose both in America and in Europe—and they grew to monstrous sizes. Companies bought each other right and left, sometimes with benefits to both sides but also in hostile takeovers.

As wars killed off generations of established chocolate-making companies, chocolate makers had to get more creative and focused in their marketing. They even found ways to get into the diets of soldiers and offer consolation to those whom the soldiers had left behind. The world’s population was rapidly expanding, and with the advent of the quotidian use of radio and television, advertising could reach billions—and did. Vast numbers of new humans could have been turned into hordes of new chocolate lovers the world over—but heat and humidity, which have always provided a challenge for chocolatiers, often got in the way.

Instead then the 20th century saw more of a rivalry for limited cocoa plantations and greater shares of the markets—regardless of the fact that chocolate already had billions of fans. Capital was needed to expand and compete; sometimes family run businesses fell to infighting over both moral and economic matters. Decisions by various companies to go public and sell stock made the pursuit for profit higher and higher on the corporate agendas of even the most ardent Quaker. This decision is what Deborah Cadbury strongly believes led to a series of decisions and events that would see her family’s company fall into the hands of a multinational corporation: Kraft Foods.

While Chocolate Wars primarily focuses on the Cadburys and their struggles to create and maintain a business while trying to adhere to their Quaker values, we also see the struggles of dozens of the big names in chocolate as, one by one, they rise and then fall under the shadow of bigger corporations. Often history tries to steer clear of making moral claims in respect to the objectivity a historian should have when gathering and evaluating evidence. Though her book offers academics much to work with on the subject, Deborah Cadbury does not pretend to be a professional historian; as such, her opinions are liberally scattered throughout Chocolate Wars—a luxury historians cannot indulge in.

If you love chocolate, in Chocolate Wars you’ll learn a good deal. If you are intrigued by corporate history, you’ll see how the history of various companies in the past 150 years might resemble much of what is happening in your own business today. If you are captivated by issues of fair trade, health, or agriculture, you’ll find plenty of background information here to help you understand the current chocolate industry. The only way to improve this book might have been to spread out the center-bound photos among the 21 chapters instead of providing them in one lump in the middle of the book.

Before you pop another truffle into your mouth. Before you buy another bag of baking chips. Before you grab a cheap candy bar at the checkout line, you need to read this book so you have a better grasp of the miracles and madness that have created chocolate.

NB: This current release of Chocolate Wars is the paperback version of the same book that has been out since 2010.

TammyJo Eckhart, Ph.D., runs an online group called The Chocolate Cult, a service that posts full sensory reviews of chocolate and chocolate related products. Since April 2009 they have had over 44,500 unique visitors from around the world, including 98 chocolatiers and companies that create or sell items related to chocolate.