The Chocolate Maker's Wife: A Novel 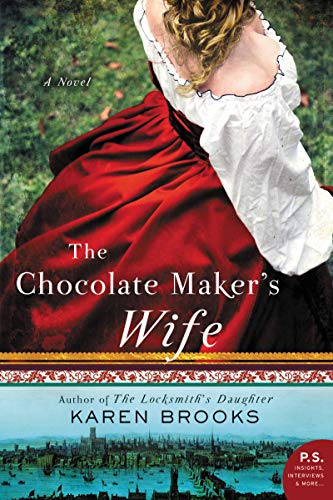 London 1662. After experiencing the servile life as a nobleman’s illegitimate daughter in the hands of a neglectful mother and abusive stepfather, Rosamund Tomkins is rescued by Sir Everard who employs his new wife in the running of his new chocolate house in London.

Yet his untimely death brings unexpected challenges to the youthful, buoyant Rosamund. His son Aubrey makes a sudden return from the New World, and he challenges her rights as heir and mistress of the chocolate house. In addition, her growing affection for Matthew Lovelace, Sir Everard’s son in law and bereaved husband and father, mirrors the mix of secret ingredients that make for the famous chocolate drinks she pours for the line of people coming through her door. In addition, the subsequent wave of plagues that wash over London threaten her very existence, followed by the fire of London whose aftermath proves to illuminate the truth.

This novel could have used a serious case of content editing for story development. Rather than opening the novel with Rosamund’s life at Bearwoode Manor, under the unpleasant auspices of her mother and the leering stepfather, this backstory wound could have been woven throughout the novel, providing depth and complexity to her character.

In addition, her early years with Sir Everard could also have been mentioned throughout, since the novel’s early exposition balloons, taking the reader away from the inciting incident when she becomes mistress of the chocolate house. As a result, readers drag themselves through the muck of details, searching for the story arc.

In all fairness the facts of life during the Restoration and the subsequent plague and fire of London are commendable and show the author’s abundance of historical research. At the same time there is too much of a good thing. A relentless onslaught—page after page of tiny elements—requires the reader to search tirelessly for mention of Rosamund’s love, Matthew. Since the details bog down the story arc, the reader struggles to engage with protagonist’s inner growth and development, which are a reflection more of the outer circumstances changing around her (death, fire, flood) rather than the transformation of her inner character as she thrives as mistress of the chocolate house and becomes a true helpmate and love interest for Matthew.

That said, the historical backdrop makes the novel a worthy read for its own sake. The elements of life during the English Restoration, the development of the chocolate trade (with mouthwatering excerpts), and the perils of the plague come alive for the reader and enrich one’s understanding of this historical era. In particular, the characterization of Samuel Pepys, the power of journalism, and the dangers of telling the truth to the king are incisive and relevant. The author deserves praise for her comprehensive historical study.