China's New Red Guards: The Return of Radicalism and the Rebirth of Mao Zedong 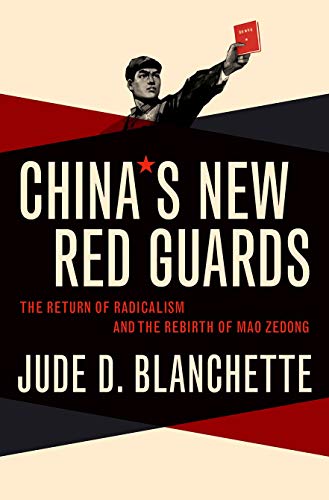 “Mao and Maoism . . . faded into the background for a time, but the Chinese Communist Party (CCP) has not and, Blanchette believes, cannot consign Mao to history without endangering its continued rule.”

Whither China? As China becomes the world’s second superpower, is it evolving toward a capitalist economy and freer society, or is it reverting to totalitarianism? Or will China find a middle-way, mixing capitalism and autocracy like Singapore? The answer to these questions may determine the course of international relations for the 21st century.

Since the death of Mao Zedong in September 1976, writes Jude Blanchette in China’s New Red Guards, “Western observers have made a near-unbroken series of erroneous predictions about China’s future, usually, and often times contradictorily, about the inevitability of political reform or the imminence of economic collapse.”

There is still a Western consensus that some form of capitalism has replaced Marxism-Leninism-Maoism as the defining feature of late 20th and early 21st century China. It goes something like this: When Deng Xiaoping won the post-Mao power struggle in the late 1970s, “dismantled” the command economy, and ended the class struggle, China’s economy took off, resulting in economic growth, rising living standards, and a modicum of political freedom. The legitimacy of China’s ruling Communist Party increasingly depended on economic growth and appeals to nationalism, instead of Marxism and Mao Zedong Thought.

Blanchette, a senior advisor on China for Crumpton Group and former assistant director of the 21st Century China Center at the University of California, San Diego, acknowledges the partial truth underlying the rosy consensus view, but challenges the notion that Maoism has been left on the ash-heap of history. Mao and Maoism, to be sure, faded into the background for a time, but the Chinese Communist Party (CCP) has not and, Blanchette believes, cannot consign Mao to history without endangering its continued rule.

The West’s approach to Deng’s reforms was, to some extent, similar to its reaction to Soviet leader Mikhail Gorbachev’s reforms during the mid-to-late 1980s. In dealing with succession struggles in communist countries, Western opinion has tended to project its own liberalism onto whoever emerges as the new Party leader, only to be disappointed when communists act like communists.

Blanchette notes that Deng’s “brutal crackdown on student protests in Tiananmen Square in 1989 momentarily dislodged our Whiggish hopes for China, laying bare as it did the CCP’s willingness to deploy raw violence when threatened.” But Deng’s market reforms continued, and the West’s hopes were revived.

On the surface, it appeared to Western eyes that after Tiananmen, Deng’s turn toward capitalism continued without much debate or turmoil, but Blanchette shows that post-Mao China has been “replete with intense ideological and political struggles,” and those debates “still fuel social, political, and ideological divisions today.”

Blanchette describes Deng’s formula for CCP legitimacy as a combination of economic modernization and political stability. The problem with that formula for China’s rulers was that economic modernization required an increase in economic freedom, and economic freedom is inseparable from political freedom. The result was Tiananmen Square. In the Soviet Empire, the result was the fall of the Berlin Wall.

The difference between Deng and Gorbachev was that Gorbachev failed to send in the tanks to stop the empire from unraveling. Deng didn’t make the same mistake. This lesson was not lost on Deng’s successors.

After Tiananmen, Blanchette notes, “[t]here was unanimity between senior Party leaders . . . that the only way to avoid the fate of the Soviet Union was to ensure the iron grip of the Communist Party on politics. . . . [T]here would be no Chinese Gorbachev.”

This produced a backlash—what Blanchette calls the rise of neo-Maoism. “Beginning in the mid-1990s,” he writes, “a series of anonymous critiques of the markets began circulating among domestic intellectual and Party circles and in overseas publications.” The critiques urged a return to socialism, an end to corruption caused by capitalism, and a reinvigoration of Party control over economic matters.

Intellectuals such as Deng Liqun, Li Yanming, Wu Yifeng, Lang Xianping, and Gong Xiantian, and some Party members criticized the privatization of state-owned companies, scorned Party elites for abandoning socialist principles and growing rich at the expense of workers and peasants, and accused pro-market reformers of ideological betrayal of Maoism.

Publications and Internet websites wrapped themselves in the banner of Mao Zedong Thought. They rejected any criticism of Mao and his policies. The death toll of the Great Leap Forward, they said, was not 30 million but 3-4 million, and Mao was not to blame. One publication called for a “second Cultural Revolution” to continue Chairman Mao’s work.

The reformists struck back. A fight for the soul of the Communist Party raged. Blanchette believes that current Chinese President Xi Jinping has sided with the neo-Maoists, recognizing that economic growth is temporary, that Party control is essential, and that the Party’s legitimacy is inextricably linked to Mao Zedong. Xi, however, also appeals to nationalism with his “China Dream.” And both sides view the United States as a global rival.

In a previous postwar era—the 1920s and 1930s—the United States watched, waited, and disarmed as several of the world’s great powers veered toward autocratic rule and armed for war. History most assuredly does not exactly repeat itself, but it is worth noting that Mao’s revival in China is being replicated in Russia, where Josef Stalin’s reputation is also on the rise.