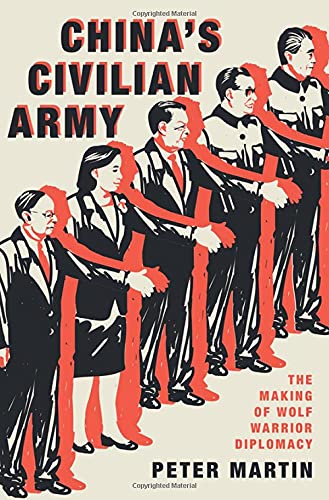 Every nation’s diplomacy is shaped by its political system. A nation’s diplomats will, therefore, mostly reflect the political systems from which they emerge. Totalitarian political parties seek to control every aspect of the governments they control. This is especially true in China, as John Martin makes clear in his informative and compelling new book about China’s diplomats, China’s Civilian Army.

Formed by the Chinese Communist Party’s (CCP) first foreign minister Zhou Enlai in 1949, China’s diplomatic corps, Martin writes, reflected and still reflects Zhou’s idea of a “civilian army.” Zhou believed that the most important characteristics of diplomats is their political loyalty and discipline—their stringent adherence to the CCP’s policies and priorities. “[W]hen Zhou came to think about how Chinese diplomacy should work,” Martin explains, “he chose the People’s Liberation Army as inspiration.”

Communist China’s first ambassadors were mostly “ambassador generals,” chosen for their loyalty and discipline. And even though today most Chinese diplomats have civilian backgrounds, party loyalty and discipline continue to be the traits prized most by the CCP leadership. “If you want to understand China,” Martin quotes a former Chinese diplomat as explaining, “you must understand the Communist Party. If you want to deal with China, you must deal with the Communist Party.”

The CCP since 1949, has been seeking to overcome China’s “century of humiliation,” at the hands of Western powers. After seizing power as a result of its victory in a civil war, the CCP started out as a pariah state, shunned by many of the world’s other countries. Its first effort to gain international respectability was at the 1954 Geneva Conference, where the U.S., Britain, France, the Soviet Union, and China sought to “settle the future of postwar Korea [and] Indochina.” There, China set up an Information Department to charm foreign journalists, especially left-wing papers like Britain’s New Statesman, and sympathetic journalists like the American Edgar Snow. Martin calls this China’s “charm offensive” that lasted until the Cultural Revolution began in 1966.

A year after Geneva, China moved to court developing countries at the Bandung Conference. These diplomatic moves caused China’s diplomatic staff to dramatically increase, Martin writes, from 170 in 1949 to almost 2000 in 1960. But China’s diplomats lost credibility with Western nations as they championed Mao’s Great Leap Forward even as it was creating conditions for perhaps the most destructive state-induced famine in history. China’s foreign minister in November 1958 told the world that “We have a few cases of illness and death: its nothing.” In fact, the Great Leap Forward cost China more than 30 million lives.

The few Chinese diplomats that dared to tell the truth about the famine were accused of “right opportunism,” and “either demoted, disciplined, or dismissed”—and those were the lucky ones. Mao treated political opposition in China in the same manner that Stalin did in the Soviet Union. The lesson was not lost on future Chinese diplomats.

Then came the Cultural Revolution in 1966, when “Ambassadors and other senior diplomats,” Martin writes, “were locked up, had their houses ransacked, and their savings stolen.” Some diplomats were ordered to scrub toilets, some were beaten, some were publicly criticized, and many had to endure struggle sessions and confessed to crimes that they never committed.

Internal political struggles wreaked havoc on China’s diplomats, and in external affairs Chinese diplomats had to adjust to worsening relations with the Soviet Union, then improved relations with the United States, the end of the Cold War, the diplomatic consequences of the Tiananmen Square massacre, China’s move toward state capitalism, the Six Party Talks related to North Korea’s nuclear ambitions, and China’s rise as a global superpower.

Martin provides brief but helpful portraits of China’s recent and current diplomats, including Qian Qichen, Yang Jiechi, Dai Bingguo, Wang Yi, Gui Congyou, and others. Despite their increasing professionalism, expertise, and cosmopolitanism, China’s diplomats, Martin notes, “are unable to extricate themselves from the constraints of a secretive, paranoid political system.” They are unable to overcome the “constant tension between truth and political orthodoxy.” They are all beholden to the CCP and, in Martin’s words, “remain sensitive to slights, insecure about the country’s place in the world, and jumpy about domestic pressures.”

Today’s CCP is controlled Mao-like by President Xi Jinping whose military build-up, aggressive moves in the South China Sea and Indian Ocean, and assertive diplomacy seek to extend China’s influence across Eurasia, Africa, and beyond, with the goal of replacing the US as the world’s leading power. China’s “wolf warrior diplomacy,” however, threatens to undermine that goal by antagonizing nations in the region and the United States and its allies. Martin notes that many Chinese diplomats understand that their behavior has caused a “global backlash” against China, but they dare not voice these concerns openly. In some ways, Martin concludes, China’s diplomatic corps is no different today than it was in Zhou Enlai’s time. It remains a “civilian army.”