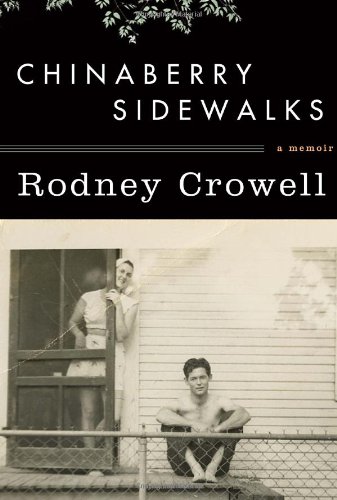 “To be well loved is to be free of the evil lurking around the next darkened corner. Every child should know that feeling.”

The country music artist Rodney Crowell is known for his singing and songwriting skills. His singing voice, often compared to that of Kris Kristofferson, may leave something to be desired. But the artist who has written songs like “Shame on the Moon” and “(The Way You Burn Me I Should Be) Ashes by Now,” has shown himself to be a bright star in this category. Crowell is also known as being the ex-husband of Rosanne Cash, which has presented other issues, such as coming off second in comparison to her singing, songwriting and writing skills.

It proves to be true again. For while Chinaberry Sidewalks is interesting in some places, it does not hold the reader’s imagination and interest the way that Rosanne Cash’s brilliantly written memoir Composed does. Cash displayed a skill for always finding the right interesting words to describe the happenings in her life; and her voice was just as unique as Bob Dylan’s in Chronicles.

Crowell never seems to find his voice or his style here, although he has been noted as stating that he felt freed from the strict rules of songwriting in putting together—over a decade—this biographical account.
“With my grandmother and Charlie (the shoe shine man) . . . I experienced love as something tangible between myself and another human being.”

This is a tough read because much of it covers the sad scenes of a childhood filled with bickering parents, and domestic violence. No doubt Crowell is being brutally honest, but it is often difficult to want to read about a childhood described as filled with nothing “but a primal instinct for survival, theirs and mine.”

In one of the hard-to-concentrate on scenes, Crowell’s inebriated mother hits his father whereupon his very drunk dad responds by punching his mother in the face. The young Crowell intervenes by breaking a Coke bottle over his own head, requiring a trip to the hospital for stitches. Yes, a few stories like this go a long way.

It must be noted that this memoir contains some near-charming stories of growing up as a boomer child (Crowell was born in August of 1950). But the reader interested in tales of playing soldier, or cowboys and Indians, etc. will find better written accounts in the memoirs of Bob Greene (When We Get to Surf City).

“. . . my parents’ deaths were unique to their personalities.”

At the end of Chinaberry Sidewalks, Crowell’s parents have found a sense of normalcy in their lives before they depart the earth—as well as love in a marriage that somehow lasted for decades. It is a comforting message but one that arrives only after a narrative that might have benefited from tighter editing. Crowell’s narrative never equates to the level of his songwriting skills in this account.

This is not a bad first effort, but the Rodney Crowell that’s found in Cash’s Composed—such as in the classic scene where a nervous young Crowell meets his legendary future father-in-law for the first time—is a more interesting person than the one found here.