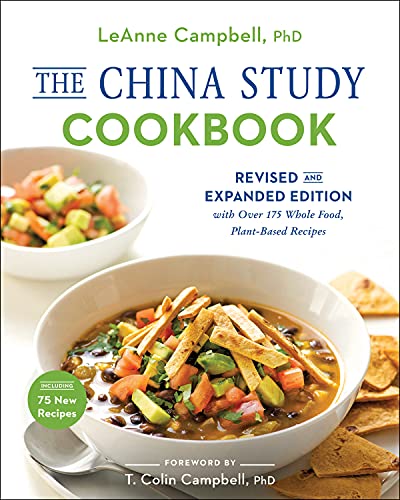 “The Campbell family continue their successful quest to create a healthier and peaceful life for everyone.”

LeAnne Campbell in her latest culinary effort has revised and expanded The China Study Cookbook. For the reader who has never heard of the China Study, written by LeAnne’s father T. Colin Campbell, a nutritional biochemist, and her brother Thomas Campbell, a physician, it is considered one of the most important health and nutrition books in the marketplace.

Published in 2005 and based on data collected over a 20-year period, the China Study has been referred to as groundbreaking. It was nothing less than revolutionary. Through the data collected in China, T. Colin Campbell was able to link nutrition and a variety of diseases such as diabetes, cancer, and heart disease.

LeAnne Campbell was raised in a typical American family. Her family believed, as most Americans did, that eggs, meat and dairy were the cornerstone of a healthy diet. Ironically this diet is known as the SAD diet, Standard American Diet, and its concepts were not to be challenged. Through scientific research The China Study exposed the pitfalls of the Standard American Diet, and it became the bible of health and nutrition.

In The China Study Cookbook, the author recounts dinners in her childhood home eating pork chops and large platters of fried chicken. She divulges that these meals were often finished off with sugary desserts served with ice cream. However, once T. Colin Campbell’s research was finalized, the Campbell family diet and way of cooking underwent a makeover. Her way of cooking and eating today is not about veganism or vegetarianism; it is about consuming whole plant-based foods.

LeAnne Campbell, in this newly revised and expanded cookbook, demonstrates through her recipes how to construct meals that may reverse many of the common ailments found among Americans such as diabetes, obesity, and heart disease and supports her father’s scientific findings. She deciphers for the reader the evidence presented in The China Study and demonstrates how to easily convert and prepare plant-based substitutions for dairy products, animal products, and refined sugar.

In this cookbook the reader learns that health begins in the kitchen and that anyone can learn how to create food that promotes health.

Chapters cover a variety of topics. The entrée chapter begins with an ethnic preparation of African vegetables. Filled with heart-healthy vegetables that burst with color, it coaches the cook on how a former chicken recipe is translated to a vegan dish. Lentils, which have been shown to lower cholesterol and boost energy levels, is presented with baked tomatoes. Tomatoes are a source of the antioxidant lycopene which is linked to many health benefits. The vegetable lasagna and the stuffed eggplant with sun-dried tomato sauce would please any Italian food lover.

In this cookbook we learn to embrace carbohydrates. They are encouraged as part of our diet and they are no longer portrayed as the enemy in our pantry. The chapter dedicated to sandwiches and wraps reminds the reader that whole grain bread products are delicious. The egg(less) salad sandwich can become a favorite lunch. A wrap made with peanut butter and granola might sound like an odd combination but is a success. Portobello mushrooms can be substituted for ground beef and easily put together for a quick summer dinner. Subs do not have to be made with salami and provolone cheese. Instead oven roasted vegetables with a bit of aioli creates a perfectly delicious alternative.

The author offers up many desserts that will not spike our sugar levels. Using unrefined sugars and sweeteners, she concocts some delicious desserts. An Apple Gingerbread Upside-down Cake made with applesauce and maple syrup is special. There is a recipe for Chocolate Brownie Birthday Cake. Simpler desserts are a coconut mango pudding, non-dairy ice cream, and lots of cookies.

The Campbell family continue their successful quest to create a healthier and peaceful life for everyone.