China After Mao: The Rise of a Superpower 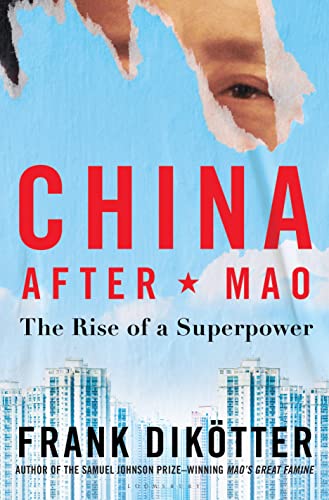 “Dikotter . . . shows in China After Mao that the CCP, even as it allied with the United States against the Soviet Union in the Cold War, was planning to reverse what it called a ‘century of humiliation’ at the hands of Western powers by eventually replacing the United States as the world’s preeminent power.”

China’s rise to superpower status between 1976, when Mao Zedong died, to the first two decades of the 21st century derived from economic, political, and geopolitical factors, not least of which was the illusion among Western statesmen and businessmen that economic development in China would lead to political reform. One of the great merits of Frank Dikotter’s new book China After Mao is that it dispels the once widely accepted view that the leaders of the Chinese Communist Party (CCP) post-Mao had sacrificed their belief in Marxism at the altar of economic growth and prosperity.

Dikotter, who has written seminal books on Mao’s disastrous Great Leap Forward and Cultural Revolution, shows in China After Mao that the CCP, even as it allied with the United States against the Soviet Union in the Cold War, was planning to reverse what it called a “century of humiliation” at the hands of Western powers by eventually replacing the United States as the world’s preeminent power.

Dikotter, who was affiliated with Nankai University near Beijing, conducted a decade of research in then-open archives in municipalities and provinces throughout China. He also gained access to diaries of Li Rui, who was Mao’s personal secretary, and who after spending 20 years in prison for publicizing facts about the horrible state-created famine in the late 1950s served on the CCP’s Central Committee. Li’s diary entries end at 2012, the year China’s current leader Xi Jinping rose to power.

The West’s China illusion, which helped fuel China’s rise after Mao’s death, was that China “was on the road to becoming a responsible stakeholder, possibly even a thriving democracy.” The China “experts” told us that “[p]olitical reform would succeed economic reform as surely as the cart follows the ox.” Yet as Dikotter repeatedly shows, every one of Mao’s successors have been committed to ultimate state control of the economy and the maintenance of the CCP’s Leninist-Maoist dictatorship.

And all of Mao’s successors were also committed to becoming a global superpower, and to accomplish this they nurtured the West’s illusion and accessed Western knowhow, technology, and capital to fuel their economic and military growth over four decades. Even Deng Xiaoping, who was praised by U.S. and Western leaders and businessmen for “opening” and “reforming” China, told his party subordinates that: “We must keep to the socialist road. We must uphold the dictatorship of the proletariat. We must uphold the leadership of the Communist Party. We must uphold Marxism-Leninism and Mao Zedong Thought.”

Economic growth, to be sure, was a policy goal of the CCP, but Dikotter shows that it was always state-directed and intended to further the ends of the CCP. The Chinese “businesses” that so enamored U.S. and Western capitalists were (and are) mostly state-controlled enterprises whose duty was not to enrich private shareholders but rather to enhance the CCP’s domestic and global power.

Dikotter devotes much of the book to the ups and downs of China’s economy after Mao, which grew rapidly at times but also suffered from bouts of inflation, deflation, unemployment, and corruption. But it is the political events depicted in the book that are most relevant to today’s U.S.-China Cold War.

The Tiananmen Square Massacre of 1989, to which Dikotter devotes a whole chapter, should have served as a warning to U.S. and Western statesmen about the limits of political liberalization in China. But it didn’t. Post-Cold War American statesmen sought a “peace dividend” and proclaimed a “new world order,” while Western businessmen salivated at the vast potential market of a billion people.

Foreign money poured into China, and fortunes were made both in China and in the West as a result of cheap labor costs and lax or nonexistent environmental controls. Chinese cities were built and modernized. Modern infrastructures were developed. Exports took off. But so did pollution. And when economic conditions periodically worsened, some Chinese citizens and intellectuals complained, even protested.

To quell actual and potential unrest, China’s modernization was accompanied by the rise of a surveillance state that exists to protect and maintain CCP control of the country and its citizens. Surveillance cameras popped up everywhere. The “Great Firewall” censored the internet. And the security services were used to repress dissident groups, such as Falun Gong members and the Uyghurs.

But perhaps most worrisome for the United States and its allies in the Indo-Pacific, is China’s growth in military power. Dikotter notes that China’s public military budget more than doubled in 2007, doubled again in 2011, and has only increased since then. He suggests that the real budget is even bigger. And it has been an across-the-board military modernization, including more and better warships, larger and more accurate nuclear-armed missiles, stealthier submarines, more powerful coastal missiles aimed at Taiwan, the building of aircraft carriers, and enhanced cyber and space warfare capabilities.

China’s leadership, Dikotter writes, is “determined to shift the military balance in the South China Sea and the Western Pacific,” with the goal of “preventing the United States from lending military support to their long-term regional allies, primarily Taiwan, Japan, and South Korea.” But as Dikotter notes, China after Mao also has weaknesses and vulnerabilities, including an aging population, a “wolf-warrior” diplomacy that alienates other countries, and an economic slowdown that undermines the regime’s legitimacy.

China today projects an image of economic, political, and military confidence, but Dikotter writes that in actuality it “resembles a tanker that looks impressively shipshape from a distance, with the captain and his lieutenants standing proudly on the bridge, while below deck sailors are desperately pumping water and plugging holes to keep the vessel afloat.”

That doesn’t mean the United States can let down its guard. China’s domestic difficulties may translate into external aggression. The CCP would not be the first dictatorship to attempt to resolve domestic problems by uniting the country against a foreign enemy. And the foreign enemy that the CCP directs its most hostile rhetoric against is the United States. A sobering thought as tensions rise in the western Pacific.