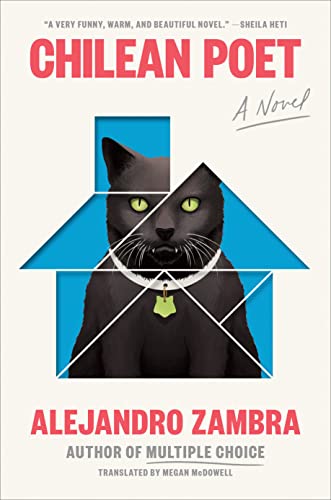 “a deeply charming story full of complex insights delivered from a simple, humanistic point of view . . .”

Alejandro Zambra’s Chilean Poet is a tour de force of language in which words feel like the wagons of a train that thrusts forward at the speed of life, straight or on a curve, toward a simple thought made beautifully complex by the act of taking the meaning behind those rhythmically meandering words, breaking them down so that we see what characters are doing, but also everything going through their minds as they do. This is a feat, this painting of a human being’s deeply three-dimensional life—which could easily have turned out a nightmare, but here, doesn’t—and done so well, it’s pleasurable, life’s rhythms reconstructed and synced to the speed of memory.

Of course, in this version, the achievement is not just the author’s, but rather a syncopated melody between author and talented translator Megan McDowell, whose translation of works by Samantha Schweblin, Mariana Enríquez, and Lina Meruane, might already be well-known to lovers of great Latin American literature.

The novel itself unfolds like a love letter much like the one the initial protagonist (the novel encompasses generations, as well as unorthodox familial combinations) sends his girlfriend Carla after they break up. A love letter about things not love, but related to love, impossible without love. Like fatherhood, and poetry, and even just the human ability to envision a future intertwined with another’s.

In the sex scene below (and there are quite a few of these), for example, Gonzalo and Carla find each other years after sharing a disastrous teenage relationship, with author Zambra showing in detail the depth of the work love is able to do, sometimes in seconds, to rescue love we’d thought lost:

“He lay down carefully beside Carla, and while he finished off a roll he tried to read some poems by Jaime Sáenz, by Marianne Moore, Luis Hernández, Santiago Llach, Veronica Jiménez, Jorge Torres. He couldn’t concentrate: they were poems he liked, ones he knew well, but now they were playing the role of frivolous magazines in a waiting room. He looked at Carla’s slightly aquiline nose, her somewhat rounded face, no moles on the right cheek, nine on the left; he sheepishly remembered having written a poem comparing that cheek to a handful of dirt after an earthquake. And then he had the thought that he liked Carla now just as much as the person he’d been at sixteen had liked the person she’d been at sixteen.”

“Carla got on all fours and he went back to pounding hard, in sync with both of their moaning, and he looked at her back and waist, where there was something like an archipelago of stretch marks, and then he remembered—he had just seen it, but it was already possible to remember it—her belly button, her scar, her larger nipples, and her breasts that were noticeably slacker, and other stretch marks he thought he’d glimpsed, as well, around her breasts, and he put into mental words what he already knew, what he was resisting accepting, because it was an irrevocable and terribly powerful phrase, capable of ruining everything: Carla had a son.”

Fatherhood, too, plays a large role in the novel, possibly one larger than the namesake poetry the initial protagonist stays true to throughout the decades held within Chilean Poet. But it’s fatherhood from a complex angle. What does it mean? And what is its role in the construction of masculinity by a modern world that often surprises us with how modern it still isn’t . . .

“They believe themselves generous because they pay two hundred bucks a month, but they’ve never done homework with their children, who love them anyway and include them in all their drawings. Even if they don’t show up. Because sometimes they just don’t show up. Biological fathers, divorced fathers, part-time dads, they’re all the same shit. Sometimes they don’t show up and it’s fine. They’ve been given that guarantee. They can disappear and they’ll still be waited for, forgiven, welcomed, and any delay, any complaint, anything at all can be fixed with a bag of popcorn or a few devious teddy bears.

“They’ve been blessed, ennobled, legitimized by the perfume of experience, but they don’t know anything about anything. They are parasites, inoperable tumors, mere faces posing for the cameras: radiant, relaxed, tanned, psychoanalyzed, well rested, carefree; they’re victimizers disguised as victims, because these days it seems like they weren’t the ones who insisted a thousand times, in every tone of voice and accompanied by fits of rage and bouts of shoving, on aborting. It seems they weren’t the ones who searched for filthy clandestine clinics at reasonable prices. Apparently they weren’t the ones who, not only on the few days when they half-heartedly perform their role, but also the rest of the time, feel that their children are a burden, the prolonged consequence of an irreparable fuckup.”

The author seems to say that men (in general, and in his view) do not fully understand that fatherhood means shaping a human being who loves you, depends on you, has a right to you, and he makes the point in small and big ways via the story, seldom preaching anything stronger than what is in the pages containing those paragraphs just cited.

By contrast, there is little social commentary that rises to the level of critique about society, or technology, or even the political and historical context of modern Chilean life, the focus instead on the story of a man and a child, later also a man, and how each one builds, and in many ways saves, the other.

The result is a deeply charming story full of complex insights delivered from a simple, humanistic point of view told thoroughly, often breaking the “fourth wall” to speak directly, with love for the reader, and for the story being told.